Where are the Keno brothers when you need them?

I could sure use an Antiques Roadshow expert to tell me more about this old hornbook that I came across today: 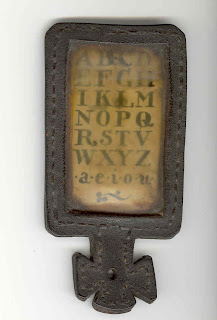 I know that hornbooks were a learning tool once used for teaching young children the alphabet, but I'd be curious to ascertain the age of this specific hornbook -- as well as where it came from and how it was made. At first I thought it was defective, as the J and U are missing from the alphabet, but I then checked the internet (TODAY'S learning tool!) and discovered that, due to the influence of Latin, the letters J and I used to be considered interchangable, as did the letters U and V. I bet Leigh and Leslie Keno could take one look at the leather encasing this alphabet and know exactly when and where it was made. All I can say is that thes leather is so stiff and dried out that this hornbook could have been used as a paddle. (I wonder if any schoolmasters and schoolmarms ever did just that.) I was surprised to discover (again, using the internet) that the material covering these old hornbooks is actually made from cow and ox HORNS, which were soaked in water, heated, flattened, peeled, scraped and polished. (And to think the letters P, E, T and A actually appear on this hornbook too.)

I'd love to know how many hands have held this hornbook over the years and how many children learned to read using it.

Here's a facsimile hornbook that contains much more than just the alphabet and vowels. It also features upper- and lowercase letters, vowel combinations -- and prayers. (Click on the image to get a closer view.) The alphabet is trimmed with metal on a wooden backing. A tiny sticker states "Printed by Otto H. Miller for THE HORN BOOK Magazine at Thomas Todd's Printing Shop on Beacon Hill in Boston 1939." 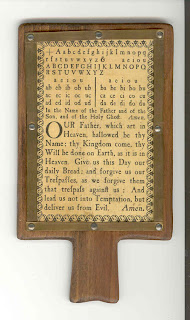 I just did some research (gotta love the internet -- it scrambles those twenty-six letters from the hornbook into billions of combinations and spits out all kinds of info. Plus no one can paddle you with it.) and I learned that hornbooks were created at a time when paper was quite expensive and rare. When paper became a little more common, hornbooks were replaced by battledores -- palm-sized booklets that taught the alphabet by using words and sometimes pictures. We have an example at the library where I work. It's called BIRDS, BEASTS, FISH AND INSECTS TO TEACH LITTLE FOLKS TO READ. Published by W. Darton (London) in 1823, this battledore could be purchased for three pence plain or six pence colored. Our edition, only six leaves and bound with what appears to be thread, is the six pence version: 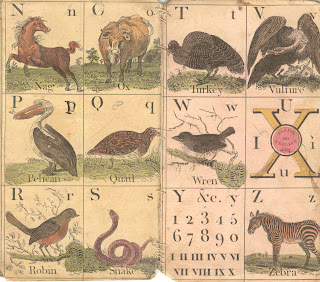 I especially like the square for X which states "X begins no English word." According to the Wikipedia (TODAY's version of the battledore) the word "xylophone" wasn't coined until 1866.

I also love the back cover of this battledore because you can see that a child has laboriously printed the word "D O G" beneath the picture of that animal. And above that is a picture of an "OUNCE." 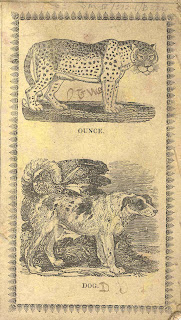 Did you know that "ounce" was once a word for snow leopard? I didn't. Which shows that even today we can learn something from reading a battledore!

Our library also holds some facsimile editions of old Battledores owned by the Boston Public Library and published by THE HORN BOOK in 1941: 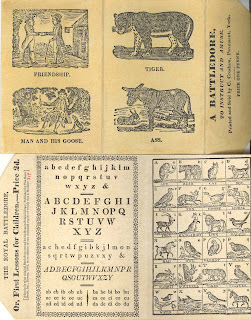 A BATTLEDORE, TO INSTRUCT AND AMUSE, pictured first, contains the usual alphabet inside, but the cover features random illustrations of "Friendship," "Man and his goose," "tiger," and "ass." I'm not sure what those things have in common, but did think it odd that "Man and his goose" is really "Man and his dead goose" (notice knife in his right hand and prostrate goose on his lap.) THE ROYAL BATTLEDORE, pictured second, illustrates the letter X with "xiphias" -- a swordfish.

Thinking about battledores and hornbooks today sent me chasing around the library to see what other examples I could find. The cover of this book looked promising: 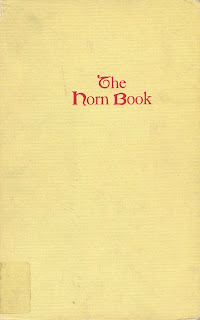 Then I opened to the title page and had to wonder if it was some kind of joke (and is the author's name a joke?) 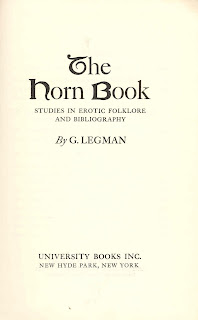 I turned to the index and discovered the volume is about censored stories, "bawdy songs" and old-time dirty limericks!

I should have learned by now that you can't judge a book -- or even a hornbook -- by its cover!
Posted by Peter D. Sieruta at 1:05 PM

What a fun post! Fair warning, many old-seeming horn books are fakes and are extremely difficult to authenticate. Andrew W. Tuer's History of the Hornbook (1896) is a good source of information. This blog has a lot of wonderful images of early hornbooks: http://thenonist.com/index.php/thenonist/permalink/the_humble_hornbook/ What fascinates me about hornbooks and battledores is that the page format of their single leaves is replicated in the first pages of primers and readers right up to 1900, which is an amazing consistency of format over 400 years.

I am just starting to teach visiting class groups in a renovated 1800 School House in central NJ. Where can I purchase an authentic looking "horn book" or "battledore"? Do you know of other One Room Schoolhouse artifact suppliers? please let me know....