Cruise on over for Sunday Brunch

Hot cars, hot summer days, and other topics are included in this Sunday brunch of random facts and opinions on children’s books.

Woodward Avenue is our version of “Main Street” -- a twenty mile thoroughfare that runs from downtown Detroit through the exclusive northern suburbs, cutting the metropolitcan area into “east side” and “west side” along the way. Back in the “American Graffiti” era, teenagers used to “cruise Woodward” on weekend nights. Those days have returned with the “Woodward Dream Cruise,” an annual August event in which classic car buffs drive their hot rods and convertibles up and down Woodward Avenue while over a million spectators sit along the road in lawnchairs enjoying the show. Even if you don’t attend the Dream Cruise, you are likely to see a lot of classic cars around Detroit this weekend. They spill off Woodward and show up on almost every road in the metro area. You see them at gas stations, in restaurant parking lots, and sitting in front of stores. It’s like jumping into a book by Henry Gregor Felsen. Remember him?

In the 1950s and 1960s, Henry Felsen was the prime purveyor of “boy and car” stories in which teenagers fix up old cars, then experience both the exhilaration and near-tragedy of speeding and showing off. Among his many books were CRASH CLUB (1958) and HOT ROD (1950): 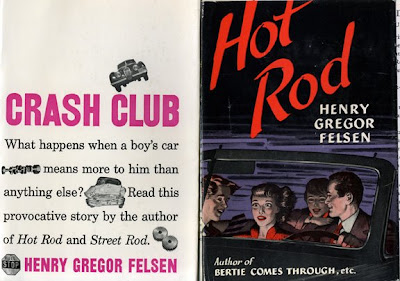 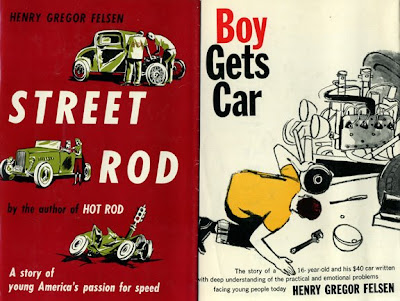 Here are a couple more books to celebrate the era of classic vehicles. Published smack in the middle of World War II, JEZEBEL THE JEEP (1944) by Fairfax Downey really plays up the “romance” between boy and vehicle. According to the dustjacket, T/5 Jonathan W. Johansen of the Field Artillary names his jeep “after one of the most determined and high-handed ladies in history and she lived up to her name.”

“Jeeps are the war horses of the 1940’s. No warrior was ever fonder of his steed than Johnny of his Jezebel. When he was jilted by a girl at home, Johnny lavished his thwarted affection on Jezebel, and she seemed to return it. She stood by him in his feud with the motor sargeant. Alone and unaided, she dashed to his rescue when he was beset by enemies. She never failed him when he drove his battery commander through the Tunisian campaign, where Jezebel took djebels in her stride. Jezebel and Johnny landed in Sicily and shared that hard-fought action until the moment when a battery of German mortars fired. Then they were parted, but not for long. They had a tryst to meet again when swords were beaten into plowshares, spears into pruning-hooks, and old, battle-scarred jeeps into new ones.” 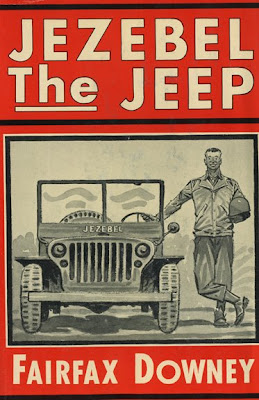 Hey, that doesn’t just sound like a “romance.” It’s more like a love story between boy and car!

Another well-remembered automotive novel is T-MODEL TOMMY by Stephen Meader, originally published in 1938, and based on the experiences of the author’s son. 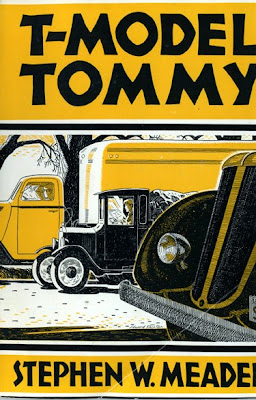 The book is now available again in paperback.

What all the above titles have in common is that they were extremely popular at the time of publication -- especially Felsen’s books, which were also released in paperback throughout the fifties and sixties. Although “boy and car” books are no longer published today (why?), I wonder if the genre could be revived if these books were reprinted for today’s teenage fans of classic cars. I know the original titles remain very collectable. Almost all the books pictured above are highly sought after by collectors and can cost several hundred dollars a piece.

The sight of all these huge cars gliding boatlike down the local streets, reflecting sun off the glass and chrome and bright paint really speaks of summer, as does this dustjacket for a book I recently came across called THE CITY IN SUMMER by Eleanor Schick (1969.) Here’s the front panel: 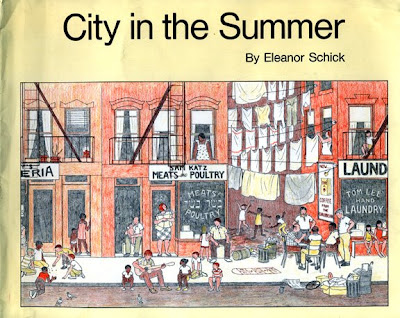 and here’s the back: 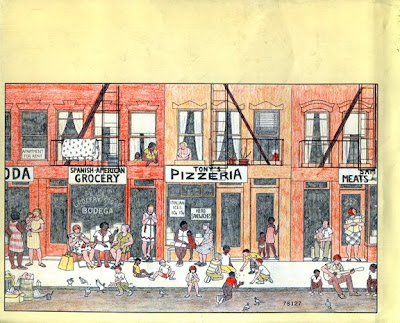 Ms. Schick also wrote a companion picture book, THE CITY IN WINTER. The cover of that one -- snowy, forlorn, nearly bereft of people -- captures the feel of that season equally well. I’ll post a picture of it when the weather changes.

M.E. Kerr’s SOMEONE LIKE SUMMER -- which tells of the romance between a Long Island girl and a young undocumented worker from Colombia -- was published last year, the day before the Fourth of July. I loved it so much that I read it twice. Today I took it off the shelf to read again -- before this summer is over. 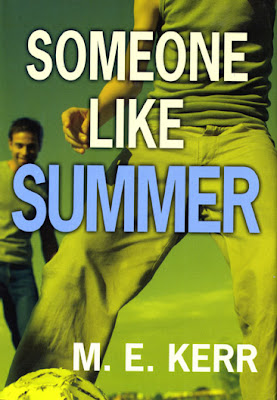 Is any young-adult author as consistently good as M.E. Kerr? Though SOMEONE LIKE SUMMER touches on many timely and important issues, it’s written with such style and ease that the pages just fly past.

As a book collector, I much prefer hardcover books over paperbacks, but here’s a case where a paperback is really needed. It’s the type of book that should be in every beachbag -- the cover stained by suntan lotion and the pages gritty with sand.

Why hasn’t it been issued in paperback yet?

Did you know that not a single Caldecott winner or Honor Book has the word “summer” in its title?

There are many Newbery books with wonderful summertime settings (most notably the 2006 winner CRISS CROSS by Lynne Rae Perkins), yet of all the Newbery winners and Honor Books, only two contain the word “summer.” One is Elizabeth Enright’s 1939 winner, THIMBLE SUMMER, an old-fashioned story of summer on a Wisconsin farm. The other is the 1971 winner, SUMMER OF THE SWANS by Betsy Byars. 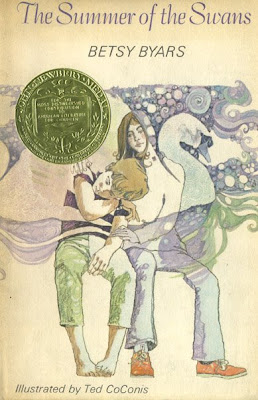 The Betsy Byars book was published the same year as E.B. White’s final children’s title THE TRUMPET OF THE SWAN and, oh, was editor Ursula Nordstrom upset when she learned that E.B. White had been passed-over for the Newbery again! She wrote this note to White’s wife:

“Well, I just heard that Andy did NOT win the Newbery. It is utterly incredible. What won was a Viking book entitled THE SUMMER OF THE SWAN. Did you ever hear of anything so odd? I consider this a terrible thing for the librarians, as nothing can hurt Andy’s books in the eyes of children and of intelligent adults. It is selling beautifully and will have a very long long life. I am simply DISGUSTED.”

I wonder if anyone today finds the selection a “terrible thing.” I think most of us agree that TRUMPET was not the strongest of E.B. White’s three children’s books. But does SUMMER OF THE SWANS (there is an “S” at the end of the title, Ursula!) hold up today? A knowledgable friend feels some of Betsy’s Byars’ novels fall into “afterschool special” territory (and it’s true, four of her books -- including SUMMER OF THE SWANS -- were on TV as afterschool specials. ) But to me, even when Ms. Byars writes about “contemporary issues” such as mental retardation (SUMMER OF THE SWANS) or the plight of foster children (THE PINBALLS), her books lack the earnest, bibliotherapeutic quality that I associate with afterschool specials. Her stories contain dialogue that sounds like it was taped from real-life conversations and she has a real gift for mixing first-rate comedy scenes with serious moments -- to great poignant effect. Reading the opening scene of SUMMER OF THE SWANS this morning, in which the protagonist Sara idly tries to put on a show with her elderly dog had me laughing out loud one moment and then feeling a bit sad a couple pages later as her sleepy dog continues to ignore her.

Although I’ve read SUMMER OF THE SWANS many times over the years, I probably haven’t read it in the past decade. I think I’ll add it to my current stack, right under SOMEONE LIKE SUMMER, and give it another shot to see how it holds up nearly forty years after winning the Newbery.

THINK IT’S HIS PHILTRUM? IT SNOT

Betsy Byars wrote another great summertime book that some (I believe author and critic John Rowe Townsend was one) felt was even more deserving of the Newbery than SUMMER OF THE SWANS. This is another one that I read many times as a kid and should revisit now. 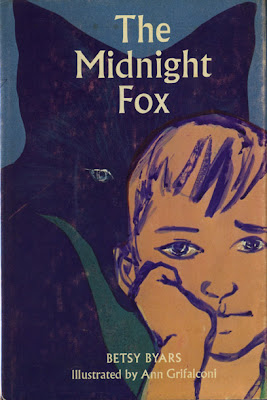 Incidentally, see the area beneath the protagonist’s nose in Ann Grifalconi’s cover illustration? At first I thought it was Tom’s philtrum, that little furrow or indentation we all have between our noses and mouths. But after reading the book about five times I realized I was wrong. In the book Tom talks about how he seldom cries...but his nose always starts running when he’s upset.

In other words, this may be the first picture of a running nose ever depicted on the cover of a children’s book.

Incidentally, my first edition of SUMMER OF THE SWANS is not signed by the author, but it does contain a bookplate signed by the author which was recently given to me by a friend. I love it. How many of Betsy Byars’ titles are included on the books shown in the background? 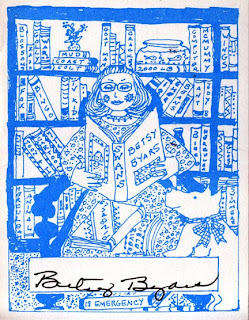 THE OLYMPICS ARE STILL RUNNING: Last week I mentioned children’s books with Olympic settings and a shy blog-reader from Cambridge, Massachusetts wrote to remind me of a title I forgot: THE MUDFLAT OLYMPICS by James Stevenson (1994.) Thank you!

THE CANDIDATES ARE STILL RUNNING TOO: A few weeks ago I complained about publisher Feiwel & Friends issuing some of my favorite books in paperback instead of hardcover. I’m still ticked about that. But I have to admit I’m captivated by the new covers for Ellen Emerson White’s “President’s Daughter” series, which are inspired by Vermeer, Wyeth, Whistler, and Leonardo da Vinci. 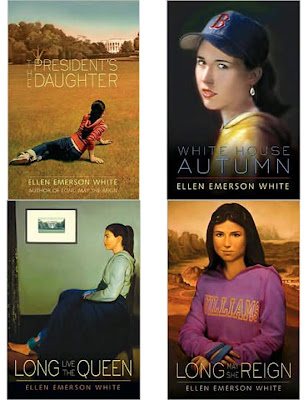 These are really breathtaking.

Now why can’t they publish them in hardcover instead of paperback?

REIGNING DOGS AND CATS: A couple weeks back I blogged about Newbery-winning dogs. Someone asked about cats. The only ones I can think of are the 1931 winner, THE CAT WHO WENT TO HEAVEN by Elizabeth Coatsworth and the 1964 winner IT’S LIKE THIS, CAT by Emily Cheney Neville.

There are also a couple of truly outstanding Newbery Honors that feature cats: THE BLUE CAT OF CASTLE TOWN by Catherine Cate Coblentz and ONE-EYED CAT by Paula Fox.

On the Caldecott side of things, the only cats I can think of are “Bangs” in Evaline Ness’s 1967 winner SAM, BANGS & MOONSHINE and Kevin Henkes’ 2005 winner KITTEN’S FIRST FULL MOON.

Among the feline Honor Books are ANATOLE AND THE CAT (illustrated by Paul Galdone; written by Eve Titus) and DICK WHITTINGTON AND HIS CAT by Marcia Brown.

Then there are three Caldecott Honor Books featuring cats by Clare Turlay Newberry. I’m glad she was known more for her artwork than her writing. ...Can you imagine how confusing it would have been if Newberry had ever won the Newbery?
Posted by Peter D. Sieruta at 4:24 PM

Another Newbery Honor book (2006)about a cat is WHITTINGTON by Alan Armstrong. It's been on my to-read list for awhile (I love retellings, and was thrilled that one won); thanks for inadvertently reminding me of it!

[I'm sorry this comment is so late--I just got home from from vacation. Thank you again!]