NEWBERYS AT THE OLYMPICS

This isn’t a story about athletes borrowing copies of BRIDGE TO TERABITHIA and HOLES from the lending library at the Olympic Games. Most of the athletes are in their late teens and twenties and would probably consider themselves too old to read those books. And of course the Chinese gymnasts are far too young for them.

No, instead I’m talking about all the “Newbery news” that’s been flooding my mailbox in recent days. I have my e-mail set to receive automatic “Google alerts” every time a news story containing the word “Newbery” appears on the internet. Normally this means articles along the lines of “Newbery winner Louis Sachar will be speaking in Tulsa this week.....” But in recent weeks I’ve been getting Google alerts all day long about Robert and Chantelle Newbery, husband-and-wife divers from Australia who have been diving for gold in Beijing. I did not see either one compete during NBC’s primetime Olympics coverage...but I understand both athletes (who had won medals at previous Olympics) went home empty-handed this time and now plan to retire. No more “Newbery Medals” for these two, I guess.

AN AWARD FOR DEBUTS DEBUTS

A west coast friend of mine recently mentioned the “Morris Award” and I had to think for a minute before I remembered what that award is all about. There’s been such a proliferation of major prizes for children’s and young adult books recently that I’m having a hard time keeping them straight. In just the past few years we’ve seen the debuts of the Printz, the Siebert, the Geisel, and, starting in 2009, the William C. Morris YA Debut Award.

“The William C. Morris YA Debut Award celebrates the achievement of a previously unpublished author, or authors, who have made a strong literary debut in writing for young adult readers. The work cited will illuminate the teen experience and enrich the lives of its readers through its excellence, demonstrated by:

* Compelling, high quality writing and/or illustration
* The integrity of the work as a whole
* Its proven or potential appeal to a wide range of teen readers”

Neat! I was particularly intrigued to learn that a shortlist of up to five titles will be announced the second Monday in December. I love shortlists and wish the Newbery, Printz, and other awards would follow suit. It would really drum up interest in these books -- and get a lot of people reading and talking (and arguing and agreeing) about the merits of the shortlisted titles. I know that I’m going to run out and get all five books on the Morris list the second Monday of December -- and I’m sure many other fans of young about books will do the same. That’s one benefit of a shortlist.

As far as drawbacks go:

Mid-December isn’t the greatest time to issue a list. If it were announced earlier in the fall, teachers might find a way to bring these five books into the classroom and have kids read them, argue for their favorites, and maybe vote in “mock Morris” polls. But having the announcement in December, right before the holiday break and the start of a new semester, doesn’t give teachers much time to get projects going. I also wonder if a title’s appearance on the Morris shortlist will somehow hurt its chances of being recognized by the Printz committee, which is also charged with honoring young-adult literature. It shouldn’t make a difference...but it could.

The big question now is:

Which five YA debuts are going to make the shortlist?

”The award's namesake is William C. Morris, an influential innovator in the publishing world and an advocate for marketing books for children and young adults. Bill Morris left an impressive mark on the field of children’s and young adult literature. He was beloved in the publishing field and the library profession for his generosity and marvelous enthusiasm for promoting literature for children and teens.”

I wrote a blog entry about William Morris on January 10, which also includes some photographs of this much-admired literary man. It also tells about how I came to own a few of the books from his personal library. Here’s one of them, followed by its rather strange inscription by author Molly Levite Griffis: 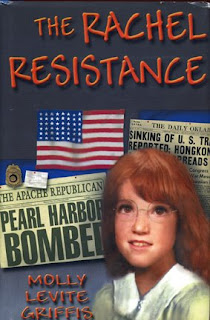 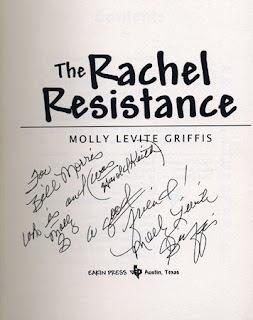 Can you figure out what that inscription (click on the image to enlarge it) means:

“For Bill Morris, who IS Molly G. and (WAS Harold Keith) a good friend!”

I’ll tell you my interpretation in a minute.

WHAT’S IN A NAME?

This morning, in an attempt to learn more about the author of THE RACHEL RESISTANCE, I found an interview with Molly Griffis in an online publication called EdNews. The article was written by a education professor in New Mexico and makes reference to several other children’s authors, including:

BACK TO HAROLD KEITH

I’ve had my copy of THE RACHEL RESISTANCE for over a year now and couldn’t figure out what that inscription meant. But after doing some research this morning, I THINK I’ve figured it out.

In the EdNews article, Ms. Griffis refers to Harold Keith as her “dear friend.” Both these authors come from Oklahoma and I learned from another online article that in the early 1990s Griffis reissued several of Harold Keith’s out-of-print children’s books (including THE OBSTINATE LAND and KOMANTCIA) through her own publishing company, Levite of Apache.

Since Harold Keith’s books were originally published by Crowell...which was later bought-out by Harper...which is where Bill Morris worked...I’m assuming that Mr. Morris was somehow involved in helping Griffis secure the publishing rights to Harold Keith’s books.

If that’s the case, see if the inscription makes more sense now, after I’ve added a couple words and moved the parentheses around:

“For Bill Morris, who IS (to Molly G.) and WAS (to Harold Keith) a GOOD friend!”

I’m not sure if that solution is right, but it’s my best guess. Book collecting is all about researching and solving mysteries and GUESSING -- and every collector must be part Sherlock Holmes, part Miss Marple and part Columbo.

It’s not surprising that Molly Griffis was able to get the publishing rights to Harold Keith’s early books. By the 1990s, most were long out of print and long-forgotten. (Though someone must have remembered his girls-basktball-team novel BRIEF GARLAND, because it was just made into a movie called BELIEVE IN ME about a year ago.)

However, one Harold Keith book may never go out of print because it won the Newbery Award in 1958. 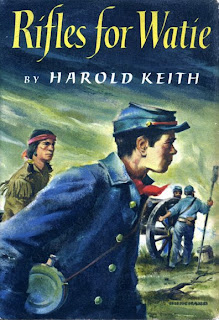 RIFLES FOR WATIE remains the only Civil War novel to ever win the Newbery. However, a few others were named Newbery Honor Books:

1933 : RAILROAD TO FREEDOM : A STORY OF THE CIVIL WAR by Hildegarde Swift

1934 : SWORDS OF STEEL by Elsie Singmaster 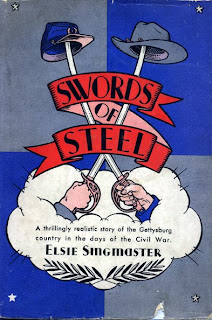 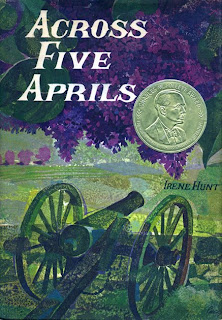 That seems to be it. Have I forgotten any? (I guess I could include the three biographies of Abraham Lincoln that were recognized as well as TO BE A SLAVE by Julius Lester, but all of those titles have a broader focus than just the Civil War.)

When taking SWORDS OF STEEL off the shelf to scan, I noted this bit of strangeness on the spine:

Have you ever seen a publication date printed on the spine-end of a book before? I don’t think I have.

IF YOUR NAME IS BARTOLOMEUS...

then today, August 24, is your Swedish “name day.” According to what I’ve read, you’re supposed to start the day with sweet rolls, coffee, candles and this song:

Incidentally, if your name is Louise, tomorrow's your name day.

And Tuesday’s name is Ejvind...though I can’t imagine there are too many people named Ejvind reading this blog.

Unfortunately, if your name is Nancy, you don’t have a Swedish name day at all. And that’s a problem for the protagonist of Jennie D. Lindquist’s THE GOLDEN NAME DAY, which concerns a girl spending a year on her grandparents’ farm. Published in 1955, the book was named a Newbery Honor. 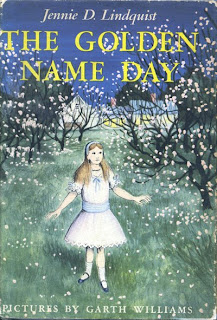 Jennie D. Lindquist was a former editor of the Horn Book and, in addition to her three books about Nancy (GOLDEN NAME DAY was followed by THE LITTLE SILVER HOUSE, 1959, and THE CRYSTAL TREE, 1966), she also wrote a monograph to honor the pioneering children’s librarian Caroline M. Hewins.

Thus, I’m intrigued by my own copy of THE GOLDEN NAME DAY, which has the following author inscription: 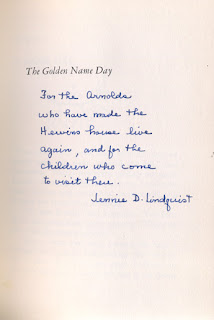 There must surely be a connection between Caroline Hewins and the “Hewins House,” but I’ve yet to find it. In the limited amount of research I’ve done so far, I’ve discovered that Ms. Hewins once opened a library in Hartford’s North Street Settlement House and then moved in, living there for twelve years (I think many of us would like to live in a library!) She also worked for the Hartford Public Library and actually had a “library dog” who lived in the building.

Needless to say, I’m anxious to solve the mystery of “Hewins House.”

IS it connected to Carolyn M. Hewins?

Who are the Arnolds who made the Hewins House “live again?”

And why did this book end up at a used bookstore in England of all places? (I bought it off the internet and paid eighty pounds.)

As I said, book collecting is all about solving mysteries.

So hand me a rumpled raincoat and unlit cigar, because Colombo has a new case to investigate!

....Incidentally, there’s also a mystery associated with Columbo himself: No one knows what his first name was.

Think it could be Ejvind?
Posted by Peter D. Sieruta at 4:27 PM

I can't help you with who the Arnolds were, but that is unquestionably Jennie's writing and signature. She did have a niece who lived in Hartford, but she herself lived in Albany until her later years, when she moved back to NH, where she was born.

She was my great aunt, and I discovered you while googling for info. My wife (an elementary school librarian) and I will be doing a Wikipedia page on Jennie soon. I will likely have to travel to Albany to read some papers there. Her personal papers are at Chester College in NH. The girls in the stories were generally agreed to be based on her age-mate cousins, but I could never keep straight which was which (there were many. Her father Henning was one of 8, I recall).

She is buried in the Swedish section of Pine Grove in Manchester, next to her favorite cousin. We put flowers on every year.