What Every Book Collector Needs

I bet you thought I'd say MONEY.

But many collectors -- including me -- don't have a lot of it. I've built my entire book collection while making a very minimal salary. There really are ways to work around a lack of funds, such as only buying books at garage sales and thrift stores, or finding some kind of part-time work whose earnings go only toward supporting your collection. (I've already talked about the summer I picked up beer and pop cans in the park -- then used the deposit money for my "book fund.") Also, once you get into collecting books, you begin finding extra volumes you can trade or resell and that's another way collectors earn money.

If I had to make a list of the three things most needed by a book collector, I'd go with the three Ps:

Here's how the Three Ps played a part in my owning a personally inscribed first edition (AND a special second printing) of Jerry Spinelli's MANIAC MAGEE.

PATIENCE
MANIAC MAGEE was published in the first half of 1990. Up to that point, I'd regarded Jerry Spinelli as an amusing, but slight, writer. I mean, he'd written a book called WHO PUT THAT HAIR IN MY TOOTHBRUSH? -- not exactly the kind of title you expect to win the Newbery Medal. Little did I know that MANIAC MAGEE would be his breakthrough book -- and that darn near everything he'd write after that (well, except for EGGS) would be pretty amazing. Even though MANIAC won the Boston Globe-Horn Book Award, I didn't track down a copy to read. ...Then came January and the book won the Newbery. I rushed to the library and checked it out, fell in love with it, and was desperate to find a first edition for my collection. I looked everywhere, but the book was already in its third or fourth printing. I kicked myself for the rest of January...February...and all through the spring and summer and fall of 1991...as the book went into even later printings. Finally it was December and Borders began stocking up for the holiday season. Back in those days (before online Christmas shopping) Borders used to fill their children's section with mountains of classic picture books (GOODNIGHT MOON), famous novels (CHARLOTTE'S WEB; the "Little House" series), Christmas favorites (POLAR EXPRESS) and current bestsellers, all stacked on the floor in piles three and four feet high -- handy for adults to quickly grab on their way to the check out line. And that's where I encountered two tall stacks of MANIAC MAGEE one cold December night. Would my patience finally pay off? I opened the covers of the copies sitting on top and discovered they were fifth and sixth printings. I was disappointed, but I also had:

PERSISTENCE
Noticing the that the books at the bottom of the pile didn't look nearly as fresh as the top ones, it crossed my mind that these books had probably been sitting in a storage facility for many months. I wondered if it was possible that some earlier editions had been included in the shipment. So I got down on my hands and knees in the middle of the store and began checking every single one of those two hundred or so volumes (belated apologies to anyone who, circa December 1991, had to walk around me while I sat there sorting books.) Finally, at the very bottom of the stack I found a first edition. Patience and persistence had paid off! 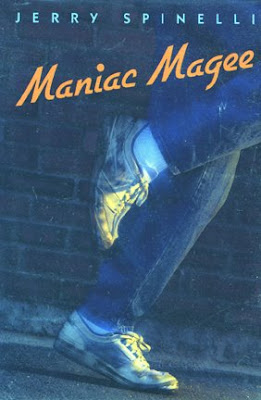 That copy of MANIAC MAGEE has now sat on my shelf for over sixteen years. I've re-read it a couple times, and have bought, read, and loved all of Spinelli's books since then -- including his Newbery Honor WRINGER; LOSER; STARGIRL, and my personal favorites CRASH and KNOTS IN MY YO-YO STRING. I always wished that Mr. Spinelli would visit the midwest so I could get my books signed and tell him how much they meant to me. Unfortunately, he has never come to this area.

PALS
One of the nice things about collecting books is that you meet other likeminded individuals. Sometimes they're comepetitors, but often they become friends. We trade books with each other, sell books to each other, and sometimes, when an author is coming to town for a signing, we get each other's books signed. That's what happened to me last month when a friend on the east coast told me that Jerry Spinelli was going to be appearing in her area and offered to take my copies to the signing. I was so grateful for this wonderful opportunity to have my copies of MANIAC and WRINGER signed -- and to get a signed copy of the author's new novel, SMILES TO GO. Last Friday the books arrived in the mail. And now my copy of MANIAC MAGEE, which took eleven months to find (PATIENCE)...by sitting on the floor and checking two hundred books individually (PERSISTENCE)...has finally been signed due to the kindness of a fellow book collector and friend (PALS.) 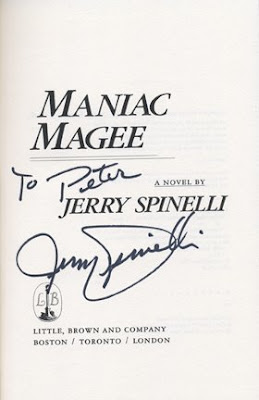 Incidentally, I mentioned that I also have a second printing of this book in my collection. This one came to me as the result of the third P as well. A year or two ago, a bookselling friend who knows that I'm always seeking unusual volumes, called me and said she had a signed copy of MANIAC MAGEE. "It's a second printing--" she began and I snobbishly said, "I don't think I'm interested."

She said, "But it's a very special copy. It belonged to someone who served on the Newbery committee that selected MANIAC MAGEE and, glued to the front endpaper, is a photocopy of the letter Jerry Spinelli wrote to the chairperson of the committee after the book won.

Without even asking the price, I said, "I'll take it!" (Luckily, it only cost $45, which seemed quite fair for a one-of-a-kind volume like that.) Here is the letter that was glued into the book. You may need to click on the image to read it: 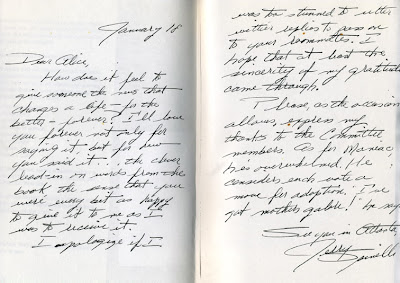 Because it won the Newbery Award.

Because it was Spinelli's breakthrough book, announcing the author as a major voice in children's and young adult books.

Because the book is often studied in school, it is well-known and loved by many readers.

How to identify a first edition:

The front panel of the dustjacket says $13.95 at the top and has the numbers 04901345 at the bottom. If the words "Winner of the 1990 Boston Globe-Horn Book Award for Fiction" appear at the bottom of the flap, it's a later printing. (That phrase was added from the second printing on.)

The copyright page states FIRST EDITION and includes the full line of descending numbers: 10 9 8 7 6 5 4 3 2 1. Make sure both points are present, because Little Brown did not remove the words "FIRST EDITION" even when the book went into later printings. So the number "1" must be included for it to be a true first.

At present there is only one first edition listed for sale online and the price is $375.00. That sounds about right, considering how difficult the book is to find.

...Still, if you have patience, persistence and a book-collecting pal, you might get as lucky as I did!
Posted by Peter D. Sieruta at 10:22 AM

I continue to find Collecting Children's Books one of the most interesting blogs out there, and the first one I read each day! Keep up the good work!

Actually, I have a question for you. I wonder if you would mind being in touch with me by e-mail at leoland@comcast.net.

Leo Landry and I have something in common. We both read your blog first each day because it is such a great, interesting read.

Thanks for writing. I really do enjoy reading.

I thought of you when I saw this article on the Boing Boing website today:
http://www.boingboing.net/2008/06/11/kids-furniture-shape.html

If I had a whole room in my house devoted to the lovely pursuit of reading, I'd get a set of these couches to use as novel chaises. Enjoy!

But why would the chair of the Newbery Committee let such a treasured book and letter go?

Thanks for your kind comments! I sent a note to you e-mail address.

If anyone else needs to contact me, you can write to Newbery13@aol.com. Thanks! Peter

Thanks for your comments as well! And thanks for the link. I love those couches and wish I had one myself!

I probably didn't explain it as well as I could have. Apparently Mr. Spinelli personally inscribed a copy of his book for every member of the committee. Then the committee chair photocopied the letter and gave a copy to each of the committee members. So the book I have did not actually belong to the Newbery chair, but to another member of that year's committee. I believe she died, which is how the book ended up for sale. Thanks so much for reading my blog! Peter