One of the chief reasons for this is that we usually want the edition "nearest to the author" and his or her original vision. If a book was published to great acclaim, or won an award the year it was issued, we want to see THAT book -- not a later copy that may no longer resemble the original. 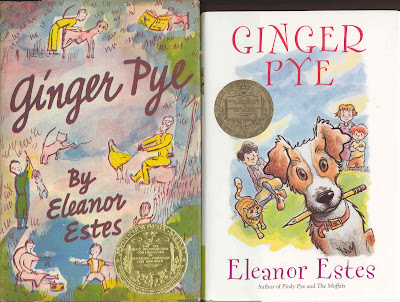 Not only are the illustrations different (Estes herself did the cover art for the first edition -- can't get much closer to the book's creator than that! -- while Arthur Howard provided the newer one), but the books themselves vary in size, with the 2000 edition a quarter inch shorter.

The original edition is 250 pages long; the later edition is 306 pages. To accommodate the change in length, illustrations have been moved from their original locations. In 1951, Ginger disappears in the middle of Thanksgiving dinner; notice how the illustration cuts right into the middle of the text as well. In the later edition, the picture appears neatly between paragraphs. 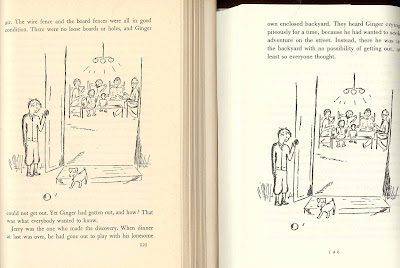 Perhaps these types of cosmetic changes are not very significant in a novel. After all, GINGER PYE won the Newbery because of its text, not for its physical dimensions or picture placement.

But what about when a book wins the Caldecott Award specifically for its artwork and design?

Here's the cover of the dustjacket for the first Caldecott winner ever -- ANIMALS OF THE BIBLE, illustrated by Dorothy P. Lathrop and published by Stokes in 1937.


Compare it to this 1998 edition, published by HarperCollins:


Not only is the lettering different, but the illustration itself has lost its softness and subtlety. It's now harsher and coarser.

Compare these interior illustrations from the two editions: 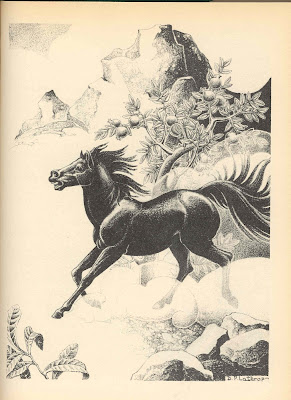 The delicacy of the first illustration is missing from the second, which seems rather dull in comparison.

Does the recent edition accurately represent the original art? Frankly, I wonder if Ms. Lathrop could have won the Caldecott for the work we see in the 1998 printing.

This is true for many of the Caldecotts I've examined.

Compare this beautiful bursting-with-autumn color illustration from Virginia Lee Burton's 1942 Caldecott winner, THE LITTLE HOUSE, with its pallid counterpart from a much later printing: 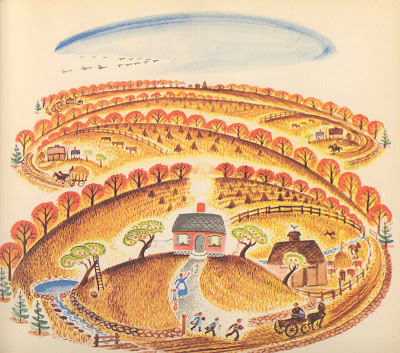 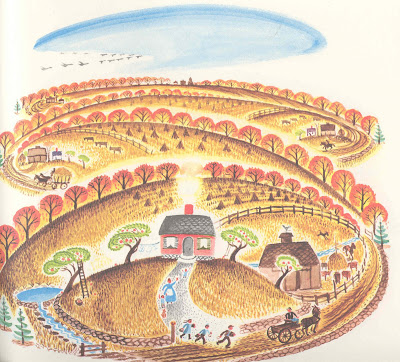 Leonard Weisgard won the Caldecott in 1947 for THE LITTLE ISLAND, which was written by Margaret Wise Brown under the name Golden MacDonald. Compare this pairing of illustrations from the 1946 and 2003 editions. In the first picture, the green leaves and fish are brighter and there is much more depth and perspective compared to the second, somewhat flat illustration: 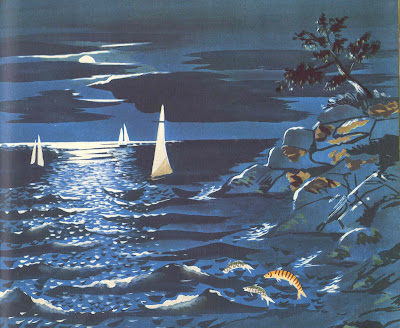 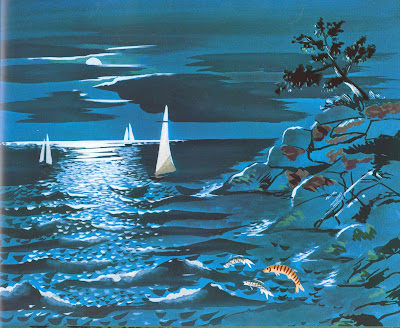 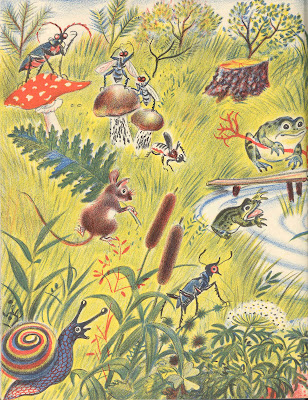 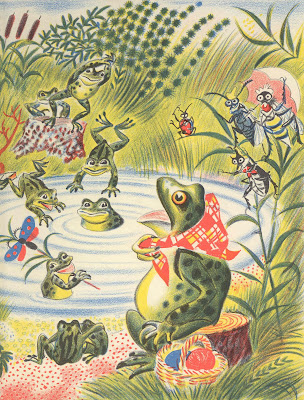 The endpapers in later editions are blank white paper.

Anyone who looks at a modern printing of a Newbery or Caldecott winner and wonders how it ever won an award might want to track down an early edition of that book -- to find out what made it so special in the first place.

And that's the reason book collectors put so much emphasis on those early editions.
Posted by Peter D. Sieruta at 10:50 AM

You can imagine my dismay many years ago, before I had my own bookstore, when a bookseller told me the book I wanted was back in print and ordered me a new copy. THE WONDERFUL FLIGHT TO THE MUSHROOM PLANET without illustrations???!!! As to the difference in how vivid the colors are in different printings, is this because the old plates lose their oomph or cheaper inks or papers are used or what? The difference in color saturation between old copies and reprints of Holling Clancy Holling's books is striking. New books with similar color palettes, however, such as THE LEGEND OF SLEEPING BEAR and others in that series, do not suffer from pale color but are as bright as the original PADDLE-TO-THE-SEA.

Thank you, by the way, for your long, interesting, informative and regularly posted offerings. I put a link to your site on my own blog and enjoy reading yours very much.