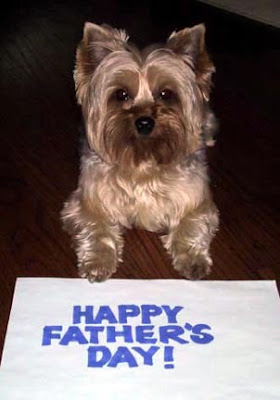 Here’s a Father’s Day Brunch offering random facts and opinions on children’s books with, in honor of the day, a focus on the paternal.

One of my favorite fathers from children’s books is Father Fox, who first appeared in FATHER FOX’S PENNYRHYMES by Clyde Watson and illustrated by her sister Wendy Watson. The picture book begins:

The sky is dark, there blows a storm
Our cider is hot, the fire is warm
The snow is deep & the night is long:
Old Father Fox, will you sing us a song? 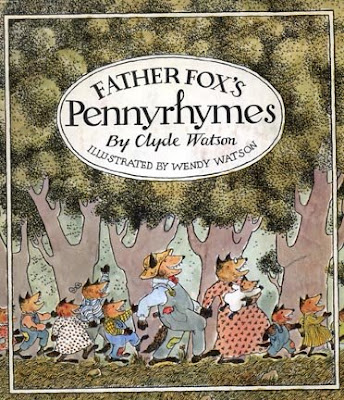 The following pages contain a collection of original nursery rhymes in the tradition of Mother Goose -- old-fashioned, sentimental, silly -- and so memorable that many get stuck in your head after just one or two readings:

Nanny Banny Bumblebee
Nanny is my cup of tea
I’m as happy as can be
When I’ve got Nanny on my knee.

The accompanying watercolor and ink illustrations add to the fun.

Introduced to great acclaim in 1971, Father Fox has made periodic reappearances to delight new generations of children -- first in 1983 with FATHER FOX’S FEAST OF SONGS and again last year with FATHER FOX’S CHRISTMAS RHYMES.

What do you do when you have a couple free weeks between jobs? Take a vacation? Hit the beach? Though not even twenty five years old at the time, Ruth Stiles Gannett used her two weeks off to write a children’s classic. 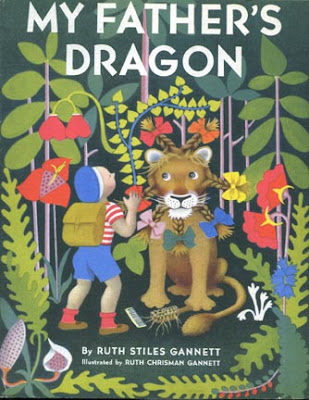 Published in 1948 and illustrated by her stepmother, Ruth Chrisman Gannett, MY FATHER’S DRAGON is the whimsical tale of Elmer Elevator, who saves a captive baby dragon by using his wits...as well as some chewing gum, lollipops, and ribbons. Throughout the book, Elmer is referred to as “my father” -- an eccentric choice, but one that gives the book an added dimension and makes it especially appealing for read-alouds.

MY FATHER’S DRAGON was named a Newbery Honor Book and continues to be loved by readers today. Two sequels, ELMER AND THE DRAGON (1950) and THE DRAGONS OF BLUELAND (1951) followed.

One of my favorite literary fathers is featured in Randy Powell’s 2001 young adult novel RUN IF YOU DARE, which describes how teenage Gardner and his family cope when Dad suddenly loses his job. 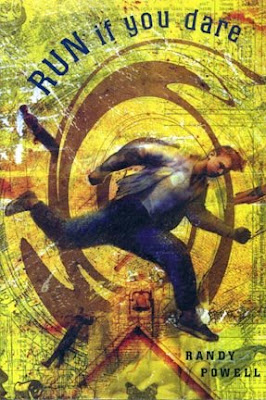 All the family interactions ring true and I particularly like the realistic conversations between father and son.

Randy Powell is one of my favorite authors, but he’s only published one book since this one (2002’s THREE CLAMS AND AN OYSTER.) As soon as he publishes a new novel, I’ll be running to the store to get a copy.

A PATERNAL MYSTERY FROM MY BOOK COLLECTION

Here’s a book on my shelf that always makes me wonder: 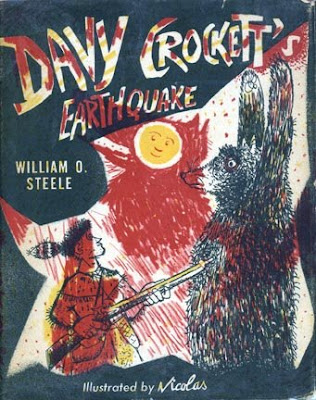 DAVY CROCKETT’S EARTHQUAKE (1956) is a tall tale by William O. Steele, who's best known for writing historical westerns for young readers. What I find so intriguing about my copy is the dedication page: 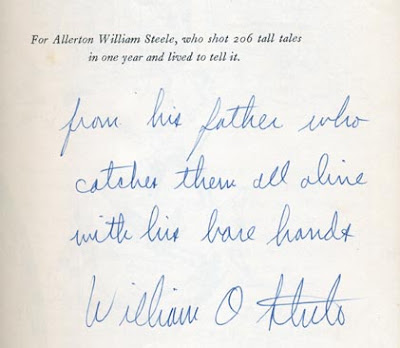 I’ll always wonder why this book is sitting on MY shelves, rather than holding a place of honor on the shelves of Steele’s son.

Fathers don’t fare well in the Newbery canon. I was just looking through my Newbery books and have never seen such a mess of dead dads, deadbeat dads, departed dads, disappearing dads, and disappointing dads. It’s sad.

But first, let’s eliminate all the books that don’t really lend themselves to this line-up because they fall in the categories of history (THE STORY OF MANKIND), folklore (THE WHITE STAG), short stories/drama (TALES FROM SILVER LANDS; SHEN OF THE SEA; GOOD MASTERS! SWEET LADIES!), and poetry (A VISIT TO WiLLIAM BLAKE’S INN; JOYOUS NOISE.)

Next, let’s remove biographies and biographical fiction-- because the presence of a father in these books is dictated by real-life facts and is not a creative decision made by the author. Some of the following books do feature fathers and some don’t. They include: INVINCIBLE LOUISA; DANIEL BOONE; AMOS FORTUNE, FREE MAN; CARRY ON, MR BOWDITCH; I, JUAN DE PAREJA, and LINCOLN : A PHOTOBIOGRAPHY.

Take out doll books because if HITTY and MISS HICKORY had fathers I don’t want to think about how that was achieved.

Eliminate the four books that mainly focus on GROUPS of people (some of whom have fathers and some don’t): THE WHEEL ON THE SCHOOL; THE WESTING GAME; THE VIEW FROM SATURDAY, and CRISS CROSS.

Finally, let’s ignore the two books that deal mainly with adult characters: THE CAT WHO WENT TO HEAVEN and THE TWENTY-ONE BALLOONS.

That still leaves us with 66 out of 86 titles -- a good sampling of what might be considered the century’s best -- or at least most notable -- books.

Of those sixty-six titles, a whopping TWENTY-TWO feature fathers who are either dead or permanently out of the picture:

Okay, you’re probably saying, but that still leaves 44 Newbery winners that include fathers. But now let’s list all the titles where the father is alive, but pretty much missing for most of the novel:

THE VOYAGES OF DOCTOR DOLITTLE : Tommy Stubbins’s father is not around while Tommy goes cruising with the doc
GAY-NECK : the pigeon has a father, but he dies early on
ROLLER SKATES : Lucinda’s father is off traveling in Europe while Lucinda skates around old New York and contemplates suicide at the reservoir
CALL IT COURAGE : the protagonist has a father but he only appears at the beginning of the book, to rebuke the kid, and the end of the book, to praise him
THE MATCHLOCK GUN : The protagonist’s father casts a long shadow across the novel but, let’s face it, he’s not around for most of the book
THE DOOR IN THE WALL : Robin has a father, but he’s far away during the narrative
RIFLES FOR WATIE : Jeff has a father, but he isn’t around for most of this Civil War story
ISLAND OF THE BLUE DOLPHINS : Karana has a father, but he’s dead by page 28
A WRINKLE IN TIME: The fact that Meg’s father is missing propels the plot
UP A ROAD SLOWLY : Julie is sent to live elsewhere by her father
FROM THE MIXED-UP FILES OF MRS. BASIL E. FRANKWEILER : Claudia and Jamie have a father, but run away without him
SOUNDER : The father casts a long shadow in this novel as well, though he’s not with the family for most of the narrative
JULIE OF THE WOLVES : Julie has a father (the creep promises her in hand in marriage to a stranger) but he doesn't appear in most of the novel
THE GREY KING : Will has a father, but his father does not share in Will’s adventures
DEAR MR. HENSHAW : Leigh’s divorced father doesn’t play a big role in his life
THE HERO AND THE CROWN : The protagonist’s father is alive, but she goes off alone on her own adventures
WALK TWO MOONS : Sal’s father is alive, but not part of the big story here
HOLES : Stanley has a father, but when Stanley is sent to Green Lake Detention Center, Dad stays home
BUD, NOT BUDDY : the search for a father is paramount here, but the story is Bud’s alone
YEAR DOWN YONDER : Mary Alice’s father lives elsewhere that year
THE TALE OF DESPEREAUX : Despereaux’s got a father (who cries, “He cannot, simply, cannot be my son”) but the father doesn’t play a part in his son’s adventures

THE TRUMPTER OF KRAKOW
WATERLESS MOUNTAIN
CADDIE WOODLAWN
THIMBLE SUMMER
ADAM OF THE ROAD (and Adam gets separated from his father for some of this novel)
RABBIT HILL
STRAWBERRY GIRL
GINGER PYE
...AND NOW MIGUEL (very much a father-son story)
MIRACLES ON MAPLE HILL (the father’s post-traumatic stress from the war plays a major role here)
ONION JOHN (some critics felt this novel was more about the father than his son)
IT’S LIKE THIS, CAT (another story with strong father-son content)
M.C. HIGGINS THE GREAT
ROLL OF THUNDER, HEAR MY CRY
BRIDGE TO TERABITHIA
A GATHERING OF DAYS
JACOB HAVE I LOVED
SARAH, PLAIN AND TALL (if the father wasn’t seeking a wife, there would have been no Sarah to write about)
NUMBER THE STARS
SHILOH
THE GIVER
OUT OF THE DUST
KIRA-KIRA

Hmm...I don’t know what to think about these figures. I guess I should go back and look at dead and missing mothers another time, as I know there are a lot of those in the Newbery canon as well.

If anyone notices any errors in the above lists, let me know and I’ll fix them.

TWO OF A KIND

Only one parent and child have won the Newbery Medal.

In 1987, Sid Fleischman won for THE WHIPPING BOY: 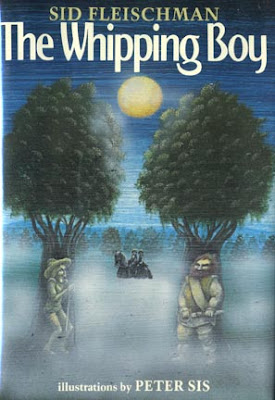 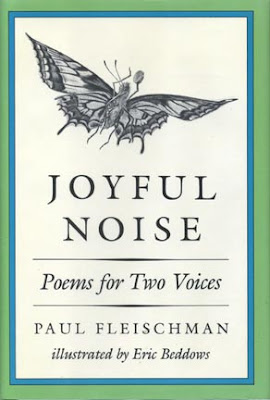 I’m a fan of both authors. Paul Fleischman’s SEEK is one of my all-time special favorites. Recently a friend of mine gave me an advance reading copy of Paul’s Newbery Honor Book GRAVEN IMAGES: 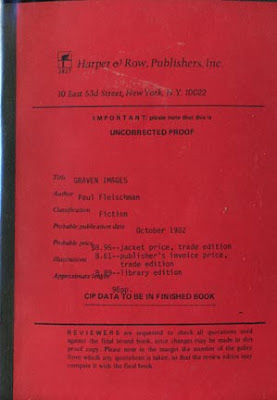 I was thrilled to receive it. I had never seen a copy before. As you know, ARCs are uncorrected, sometimes incomplete copies of the finished book. This particular ARC was printed without a title page. But guess what? My friend asked Paul to sign the book. He wrote the book’s title and his own name on the blank title page: 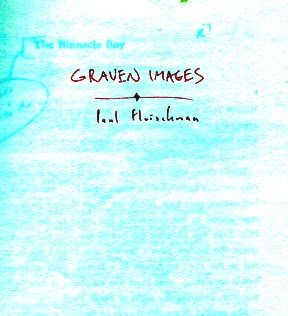 Do I have the only copy in existence where the author wrote out the title page himself? Talk about one of a kind!

Happy Father’s Day to all the fathers out there!
Posted by Peter D. Sieruta at 2:14 PM

Thanks for the very enjoyable brunch!

I vote for the rabbit father in Rabbit Hill as Best Newbery Dad.

Peter; You are a one of a kind friend. The ARC belongs in your collection. It was my pleasure. STP

Interesting about the missing fathers. I've read elsewhere about missing mothers in children's books. Seems that the absence of one or both parents opens doors to adventures for the young characters in the books and that being vicariously parentless appeals to young readers.

Randy Powell has a book coming out this fall from FSG--SWISS MIST. The father in it plays a large role but definitely counts as disappearing and deadbeat...

Interesting! One year when I was on the Newbery committee we did up a list of bad mothers--books featuring mothers none of us wanted to have.