Yesterday I happened upon a copy of the 1926 Newbery winner SHEN OF THE SEA : CHINESE STORIES FOR CHILDREN by Arthur Bowie Chrisman.

Originally published by Dutton in 1925, this is the dustjacket of the eighth printing, which was issued in November 1926: 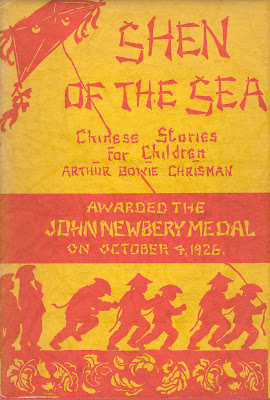 I found this volume intriguing for several reasons.

Although the Newbery had only been around for four years, it already seemed to have some prestige and must have been considered quite a selling point, as it was played up so prominently on the cover. I was also impressed that the announcement of the medal was incorporated so well into the design, using the same colors and typeface employed in the original

dustjacket. The back flap of the dustjacket also refers to this volume as being the "Newbery Medal Edition."

I'm assuming that these components did help sales. According to the copyright page, SHEN OF THE SEA was first published in July 1925. It went back for a second printing in December and returned for a third in July 1926. Then the award was announced in October 1926 -- leading to three quick printings that month and two more in November. Then, as now, winning the Newbery seemed to assure bestsellerdom.

What intrigues me most about this book, though, is the date on the jacket: October 4, 1926.

Today we are all used to the award being announced in January and the presentation being made in June. Apparently this was not always the case. Based on some sources I've seen, it appears that the announcement and presentation of the awards were simultaneous in the early years. At least that's the impression I get from articles published in the New York Times about 1922's winner THE STORY OF MANKIND by Hendrik Van Loon and 1927's SMOKY THE COWHORSE by Will James. Those awards appear to have been both announced AND presented in June.

If the awards were given in June both prior and subsequent to SHEN OF THE SEA winning, why was the 1926 Newbery announced and presented so tardily in October -- a full year and a quarter after the book's publication?

I guess I'll have to do more research to find the answer.

One thing I've learned about children's books is that the more you think you know, the more you need to learn.
Posted by Peter D. Sieruta at 11:02 AM

Hi Peter, I thought you might like to know about Tasha Tudor's passing on June 18th. I love her work & her life is so interesting. http://www.tashatudorandfamily.com/news.html