It was a Saturday morning in early November. The sunlight was dim and watery, the trees were bare. Autumn was starting to change to winter. Then, from overhead, I heard what sounded like hundreds of gloved hands applauding -- softly at first, but getting louder and louder. I ran to the window just in time to see a skyful of beating wings fly over the roof and swoop past my window. Hundreds and hundreds, maybe thousands, of grayish-brown birds were descending, touching down in trees, on the lawn, and all along the low brick wall that borders the street. I never heard such a chirping, cheeping, screeching, and whistling in my life. Nor had I ever seen so many birds in one place. Trees that been leafless skeletons two minutes earlier were now so crowded with life that they seemed to be in full summer growth. The ground had turned into undulating avian lake. It was like a scene from an Alfred Hitchcock movie -- the only thing missing was Tippi Hedren.

Twenty minutes later there was another massive beating of wings as the trees emptied out and wave after wave of birds rose into the sky and then soared out of sight. It was the first time I'd ever seen a flock of birds taking a pit stop on their annual migration to the south. It was one of those amazing moments that make you want to become a professional birdwater or go check out every library book you can find on birds and migration. I think there must be something quite satisfying and orderly about studying birds. They travel south every winter and return every spring. They follow similar migratory paths. And the swallows always come back to Capistrano on March nineteenth.

The world of book collecting isn't nearly as precise. In fact, it's downright random. Books start off in one place, end up a world away, and nobody seem to know how they got there. 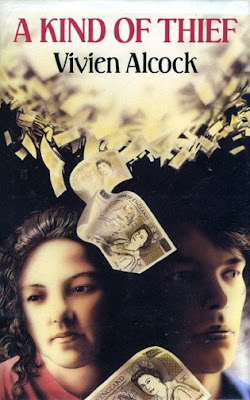 Known for writing novels of suspense and the supernatural, Ms. Alcock's honors include one book shortlisted for Great Britain's Carnegie Medal (1989's THE TRIAL OF ANNA COTMAN) and several titles selected as Notable Books by the American Library Association. She was married to Leon Garfield, who was considered one of the great twentieth-century writers of children's books.

Published by Methuen in 1991, A KIND OF THIEF concerns a girl whose father has been accused of embezzlement. It's a fine mystery, with intriguing moral dimensions. But there is an even bigger mystery attached to my copy of this book. The copy on my shelf was once owned by Sheila and Eric.

I don't know...but Vivien Alcock dedicated the book to them: 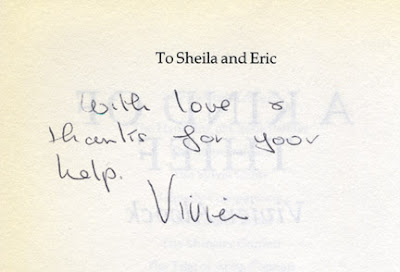 I found A KIND OF THIEF at a bookstore in Gresham, Oregon.

From London to Gresham...from England to the United States. Talk about migratory paths! Actually, this book didn't just migrate...it immigrated! But how did it get here?

Were Eric and Sylvia British friends or relations who later moved to the U.S.?

Were they American friends of the author?

Or did the book make a more circuitous path from there to here -- a journey that none of us will ever know?

I enjoy musing about it and someday I'd love to figure out the solution to this mystery. But for now I'm just glad this migrating book somehow took off from England, made a pit stop in Oregon, and eventually came in for a landing on my bookshelves in Michigan.
Posted by Peter D. Sieruta at 10:48 AM

Well, this book didn't immigrate, but I wish I could find the history.
A couple of weeks ago, I was rummaging through shelves of books at the local thrift store, finding titles on my 7th grade reading lists for next year. (I teach junior high.) And I found a good copy of Zilpha Keatley Snyder's The Headless Cupid, which I'd had to take off my lists because it has to be special ordered and the kids won't go through that trouble.
The next day I was marking the inner covers of all the paperbacks with my name so they'd find their way back to my classroom when kids leave them elsewhere, when I flipped open the cover of Cupid.
It was autographed to "david" by Ms. Snyder herself!!! Whoa.
I LOVE Snyder's books, and I love to collect author's autographs, so this was 50 cents well-spent (and I took it home -- it won't stay in my classroom). But I still wish I knew who on earth would give away a book autographed by a famous children's author!