A Sunday Brunch with No Cover Charge

Here’s another Sunday brunch featuring random thoughts and opinions on children’s books -- this time with a special focus on Caldecott sequels, “hesitating purchasers,” and cover illustrations.

Last week I mentioned Ruth Sawyer’s Newbery winner ROLLER SKATES and its sequel THE YEAR OF JUBILO. I thought it might be interesting to compare the two original dustjackets side by side. Valenti Angelo’s ROLLER SKATES cover has all the warmth and movement of an etching chiseled into a gravestone; no wonder I thought Lucinda tossed herself into the reservoir at the end of the book! Conversely, with Edward Shenton’s colorful dustjacket you can practically hear the wind blowing, the seagulls keening, and the water lapping against the rocky Maine shore. Shenton’s portrait of Lucinda is bright and alive; Angelo’s is stiff and dead. Note: you can click on any of the following images to enlarge them. 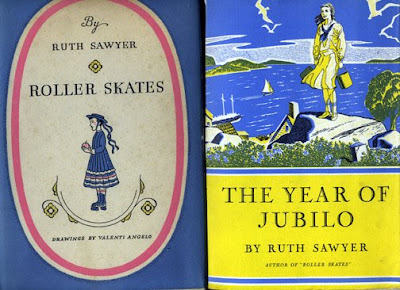 Only four years (in both Lucinda’s life and the publication of the two books) separated SKATES and JUBILO, but the two dustjackets look as though they were rendered in different centuries. Here’s another pairing I discovered -- though in this case they represent the same book. Madeleine L’Engle published MEET THE AUSTINS in 1960 with a dustjacket created by an unattributed illustrator. The book was republished in 1997 with a dustjacket by Dennis Nolan. 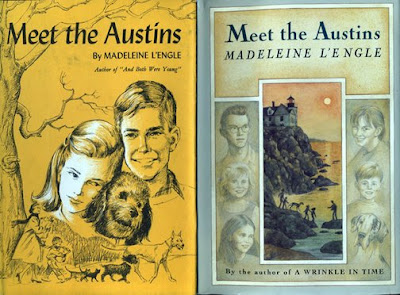 The 1960 jacket features five pictures of family pets and the focus is on older siblings Vicki and John (though if you didn’t know the novel you might assume they represent a romantic couple.) Mom makes an appearance, hefting grocery bags as mothers were wont to do in the early sixties.) By the time the new dustjacket was issued in 1997, the number of pets was whittled down to two, Mom’s nowhere to be seen, and the emphasis seems to be on the novel’s setting, with the kids presented in soft-focus border illustrations. I can’t say one dustjacket is “better” than the other, but do think they represent the time periods in which they were published. Since I grew up in the 1960s and 1970s, the first dustjacket appeals to me most -- either because I’m most familiar with it or just because the style is representative of that era. I suspect that if you grew up with the second dustjacket it will be your favorite.

If they ever decide to publish a new edition, the dustjacket probably won't be illustrated by an artist at all. Instead, it will feature a photograph culled from some free image bank.

THE GREEN GLASS SEA by Ellen Klages was one of my favorite books of 2006 and I was rooting for it to win the Newbery Medal. Now it’s out in paperback and has the opportunity to garner thousands of new readers. Or WOULD have...if it hadn’t been saddled with this bleak cover. When I first saw it in the bookstore I thought it was a new paperback for adults -- maybe some academic treatise on ecology. Then I saw the title and did a double-take. I don’t think I’ve ever seen a cover with less child-appeal. I hope kids can get past that because it really is a great book that many would love if they’d give it a chance.

The GREEN GLASS paperback may be a bust, but I was thrilled to see that its sequel, WHITE SANDS, RED MENACE, which is due out this fall, has a fantastic dustjacket illustration. Now HERE is a cover that draws readers in! 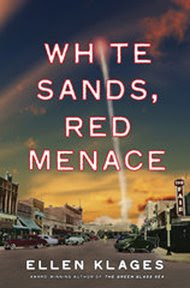 John Green won the Printz Award for his first novel, WAITING FOR ALASKA. I liked his second book, AN ABUNDANCE OF KATHERINES (which was named a Printz Honor) even better, finding it more original, funnier, and deeper than his first. I’m really looking forward to his new novel, out this fall, called PAPER TOWNS. This past week I heard the book is going to issued with two different dustjacket illustrations. Here they are. I call them “happy” and “sad”: 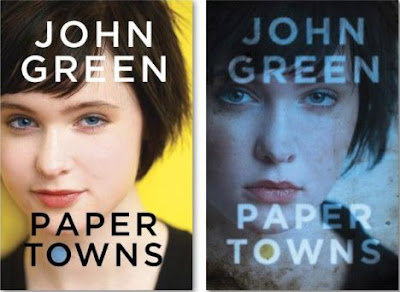 It will be interesting to see which jacket most teens embrace. I can’t decide which I prefer but have a sick feeling, from a collecting perspective, that I may have to get both. (When does a $17 book cost $34? When you need to get two copies so you can have each cover in your book collection.) I also have other concerns about this dustjacket. Last week I wrote about M.E. Kerr no longer using the word “love” in her titles because it seemed to scare off male readers. I’m wondering how many young male readers will want to carry around either of these jackets -- happy OR sad -- considering they both look like “girls’ books”.... And that’s too bad because, from what I’ve read, the story itself would appeal to teenage boys.

OTHER WAYS TO SCARE OFF POTENTIAL READERS

This past week I was working on a project involving TREASURE ISLAND by Robert Louis Stevenson. I noticed that several -- though not all -- of the copies in our library had a preliminary page addressed “To the Hesitating Purchaser.” Here’s an example: 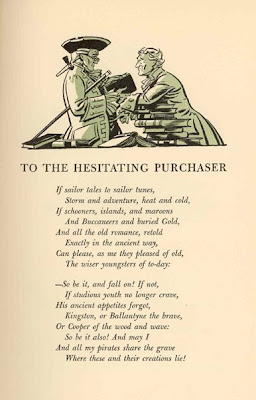 TO THE HESITATING PURCHASER

If sailor tales to sailor tunes,
Storm and adventure, heat and cold,
If schooners, islands, and maroons,
And buccaneers, and buried gold,
And all the old romance, retold
Exactly in the ancient way,
Can please, as me they pleased of old,
The wiser youngsters of today:

--So be it, and fall on! If not,
If studious youth no longer crave,
His ancient appetites forgot,
Kingston, or Ballantyne the brave,
Or Cooper of the wood and wave:
So be it, also! And may I
And all my pirates share the grave
Where these and their creations lie!

I know what he’s trying to say, but it sounds a little passive-aggressive to me: “Well, if you’re not ‘studious’ enough to care about my book, I’ll just toddle off and join Ballantyne and Cooper and all the other classic authors you’re not smart enough to understand. Oh, those authors are dead? Well, I guess I'll just have to join them....”

(Incidentally, in doing research on the book, I discovered the poem was used during the opening credits of the 1955 TV series LONG JOHN SILVER. Actor Robert Newton read the first stanza -- throwing in a piratey “Ar! Ha-ha!” -- but didn’t include the self-pitying second stanza.)

I’m just glad this “To the hesitating purchaser” fad didn’t catch on, forcing all authors to include pandering pleas in their books. Can you imagine E.B. White writing:

Enjoy this gentle tale of Charlotte
Unless spiders make you afraid.
If so, then simply close the cover
And spray the book with Raid.

Or Louis Sachar offering this introduction:

I hope that you will buy my book
If you don’t, I will be hurt.
In fact, I just might dig a hole
And cover myself with dirt.

A SEQUEL TO LAST WEEK’S BRUNCH

Last Sunday I made a list of sequels to Newbery-winning books. This week I thought I’d see what Caldecott titles had sequels too.

1994 : GRANDFATHER'S JOURNEY by Allen Say. Thanks to blog-reader Esperanza who pointed out that Say's 1999 volume, TEA WITH MILK, is a sequel.

Is that it? Only three? If I’m forgetting any, please let me know and I’ll add them in. I can’t help but think there MUST be more. No EIGHT DAYS TO CHRISTMAS? ALWAYS ROOM FOR TWO MORE? HEY AGAIN, AL? KITTEN’S FIRST QUARTER MOON?

HAUNTED BY A SUMMER STORY

As I write this, it’s ninety degrees outside.

Every summer when the weather gets hot and schools close for vacation, I get an urge to read one of my favorite books of the season, TAKERS AND RETURNERS: 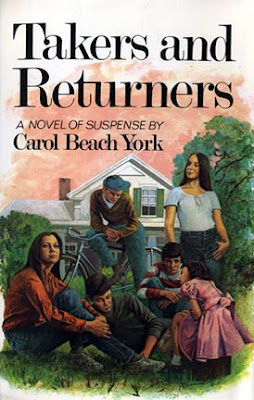 Written by Carol Beach York and published in 1973, this spare novel -- which doesn’t contain an extraneous syllable or word -- tells of a group of friends and relatives who play a dangerous game in which one team must steal an object and the other must replace it without being caught. As the stacks are raised higher and higher, the tension becomes unbearable. And the conclusion is stunning in this read-it-in-one-sitting summertime story that I return to year after year.

Originally published by Thomas Nelson, most copies of this book must have gone to the library market because I have yet to find a first edition for my collection -- and I’ve been looking for decades.

Luckily a small publisher (possibly a “print-on-demand” company?) called “e-reads” re-issued the book a few years ago in paperback. Now I have a copy of my own that I can pull off the shelf whenever the temperatures get too high and I require a much-needed chill or two.
Posted by Peter D. Sieruta at 5:06 PM

Actually, I always took Stevenson to be saying that if potential readers are TOO studious to care about pirates, doubloons, waves, wrecks, et al. -- their ancient appetites -- then he'd just as soon be dead. Eh?

You may well be right. He does refer to "wiser youngsters of today." And who am I to disagree with Jim Hawkins himself -- after all, you were there! Thanks for reading my blog. Peter

I believe that Tea with Milk is a sequel to Grandfather's Journey.
There are many Caldecott Honors that have sequels.

Thanks, Esperanza, for letting me know about TEA WITH MILK. I've added it to the list.

I will have to tackle sequels to Newbery and Caldecott Honors in a later block. It will probably be an overwhelming project!

Thanks for your continued interest!

One sometimes wonder what on earth art directors — or the committees of art directors, editors, and marketing people are thinking. The cover of The Merlin Conspiracy by Diana Wynne Jones is my pick for the worst cover of all time. Hideous, illegible, irrelevant.

I also loved Green Glass Sea but it would be much too sad for my nieces, ages 10 and 12. I wonder if the cover is simply meant to appeal to an older audience?