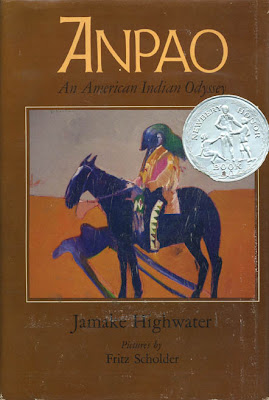 In 1977, the young adult novel ANPAO : AN AMERICAN INDIAN ODYSSEY was published to great acclaim. The book received a Newbery Honor and its author, Jamake Highwater, was praised for his authentic Native voice. The back flap of the dustjacket features a photograph of Highwater bedecked in Indian regalia and the text tells us this "young writer" is "of Blackfoot/Cherokee" heritage.

Young? He claimed to have been born in 1942, which would have made him 35 at the time of ANPAO's publication. But others claim he may have been born as early as 1923.

Blackfoot/Cherokee? That's still very much in question. Adopted and raised by a caucasian family, he was originally known as "J Marks," "Jay Marks," and "Jack Marks." After an early career as a dancer and choreographer, he became a music critic and published a book about Mick Jagger and the Rolling Stones. In the late 1960s he began to claim that his birth mother was Cherokee and his father was Greek, but later changed the story (and the names of his supposed parents), saying his mother was Cherokee, his father was Blackfoot and they had died of starvation during the Depression. After publishing the FODOR GUIDE TO INDIAN AMERICA as "Jamake Hightower," he became known as a authority on Native life and began publishing fiction and nonfiction on Indian themes.

During the 1980s, many Native Americans began questioning Highwater's background and branded him a liar, saying he had no Indian blood at all. For an interesting look at the controversy, check out the essay "Jack Marks is Dead, Oh Well" at http://www.dancingbadger.com/jamake_highwater.htm.

Highwater died in 2001, taking his secrets with him. But his books remain. Because of its status as a Newbery Honor, ANPAO continues to be read and studied in schools. Considered a brilliant, award-winning novel in 1977, do the critical approbations change now that it's fairly evident the author was an imposter? Is the book any less valid now that we know it's not written with an authentic Native voice but was instead written by an outsider looking in? I don't know the answers to these questions, but they are intriguing to ponder.


What makes the book collectable:

The controversy about its author.

Some copies, particularly signed ones, are listed at several hundred dollars, but a nice first edition can still be found for $45 or less.

There are also some ARCs available, printed in the "old school" style -- very tall, narrow volumes whose pages don't match the pagination of the hardcover; the illustrations are not printed in the ARC.

My copy of the book (purchased for thirty-five dollars less than ten years ago) is inscribed to its former owner. The signature is nearly impossible to read. He could have signed it with almost any name and we'd never know the difference.

And isn't that ironic. 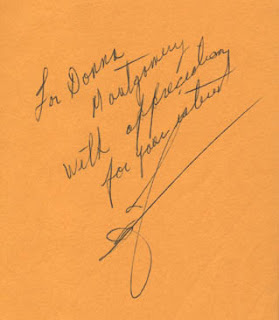 In some of your posts earlier this year you included your thoughts on why the title might be collectable and information on recognizing and obtaining a first edition. Will you continue to include that? I find it interesting.

Thanks for the suggestion, Esperanza. I went back and added that info to the blog entry.

Thanks for your continued support.

Nice Blog......Very informative.
Keep posted..Iam also a children book lover like you...i just started a new blog...pls have a look at my blog children books thanks

I was questioning what is up with that bizarre gravatar??? I do know 5am is early and I’m not trying my finest at that hour, but I hope I don’t appear to be this! I'd however make that face if I’m requested to do one hundred pushups. lol

wow. finally, I found something helpful for my paper to put in writing about. this is interesting and helps me with more analysis within the future. Glad I found this blog.Thank you. And I do hope you will increase some of your ideas about this matter and I will certain come again and skim it. Thanks for the effort and time.

I can not cease reading this.It really is so nice, so full of information that i just did not know.I am lucky to view that guests are in reality talking about this downside in this kind of a intelligent technique, displaying us all many different. You're one nice blogger. Please keep it up. I can't wait to go through what’s next.

Hrmm that was bizarre, my comment bought eaten. Anyway I wished to say that it’s nice to know that someone else also talked about this as I had hassle discovering the same data elsewhere. This was the first place that told me the answer. Thanks.