Return of the Phantom!

Back on January 23, I wrote a blog entry on "phantom books" -- elusive volumes that may or may not exist.

Although Louise Fitzhugh died tragically young in 1974, she left a lasting legacy with her novels HARRIET THE SPY, THE LONG SECRET, and NOBODY'S FAMILY IS GOING TO CHANGE. She also left a few unpublished manuscripts, including the picture books I AM THREE, I AM FOUR and I AM FIVE and the HARRIET sequel SPORT. The manuscript for I KNOW EVERYTHING ABOUT JOHN AND HE KNOWS EVERYTHING ABOUT ME was also found among her papers. Doubleday acquired this book, hired Lillian Hoban to illustrate it, and set a publication date of November 1993. However, when advance copies went out to review journals, an astute critic recognized the text was identical to MY FRIEND JOHN, a Charlotte Zolotow story that Harper had published in 1968 with Ben Shecter illustrations.

This was surely an innocent mistake. Perhaps Louise Fitzhugh was sent the typescript of MY FRIEND JOHN because Harper hoped she would illustrate it. Or maybe her friend Charlotte Zolotow just wanted to share the story with her before it was published. Whatever the case, it ended up among her papers and her literary executors naturally assumed it was something she'd written. When the mistake was discovered, Doubleday cancelled publication.

Now I know that hardcovers WERE printed -- because I just found one! 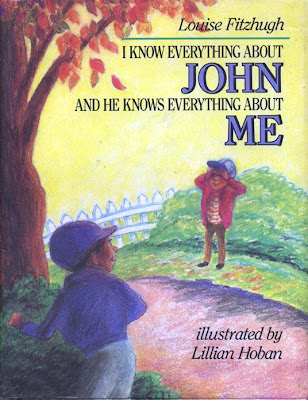 Phantoms -- those elusive, ghostly beings -- have a way of disappearing and reappearing in puffs of smoke, sliding under closed doors, snaking through keyholes, and taking us by surprise. The same must be true of phantom books. How did this volume, never published or distributed, escape the paper shredder -- the publishing world's Grim Reaper -- and end up on my bookshelf?

I guess we'll never know the answer for sure, but the question will haunt me for a long, long time.
Posted by Peter D. Sieruta at 7:40 PM

This is a pretty amazing story - I learn something new all the time when I read this blog. Thanks for the post.