This year marks the 100th birthday of THE HOLE BOOK by Peter Newell. 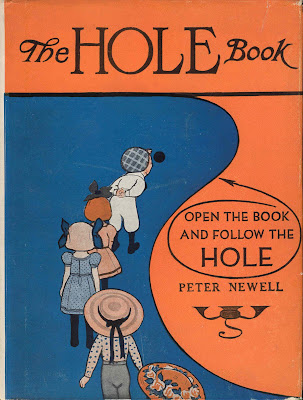 Published by Harper in 1908, this novelty book is based on a gimmick -- a diecut hole that appears on each page, tracing the trajectory of a stray bullet fired by a little boy who "didn't know 'twas loaded." (Yeah, yeah, that's what they all say.)

According to the book:

Tom Potts was fooling with a gun
(Such follies should not be),
When--bang! the pesky thing went off
Most unexpectedly!

For the next two dozen pages, we watch as the bullet pierces a water heater, blows up an automobile, shatters a fish tank, and even kills a cat. 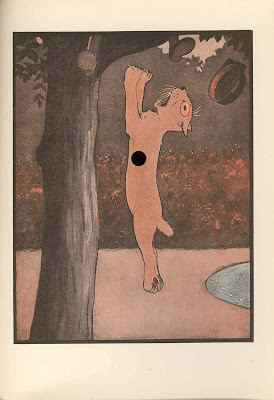 Peter Newell (1862-1924) was well-known during the "Golden Age of American Illustration," for illustrating magazine serials by Mark Twain and Stephen Crane, designing advertisements for Ivory Soap, and producing newly-illustrated editions of ALICE'S ADVENTURES IN WONDERLAND and other works by Lewis Carroll. His own books often relied on clever contrivances. TOPSYS & TURVYS (1893; a second volume followed in 1894) features illustrations that reveal different images when looked at upside-down. THE SLANT BOOK (1910) contains slanted pages that show a runaway baby carriage wreaking havoc as it careens downhill. THE ROCKET BOOK (1912) follows a sky-bound rocket as it disrupts the residents of several apartment flats.

Though once very popular (THE HOLE BOOK is purported to be one of Dr. Seuss's favorite childhood books) Newell's volumes fell out of favor over the decades. I can hazard a guess or two why. For one thing, the mixed-media illustrations (some in color, others printed in black-and-white from color originals) are awfully dated. Plus they are more than a little politically incorrect. Kids with guns? Bullet-ridden cats? Yet THE HOLE BOOK and a few others have been reprinted as recently as 2001 by Tuttle Publishing. They are interesting as literary curiosities, but it should be noted that reproduction of the artwork is below par. The first illustration is from a 1944 Harper edition; the rather dim, grainy picture beneath that is from the 2001 Tuttle edition: 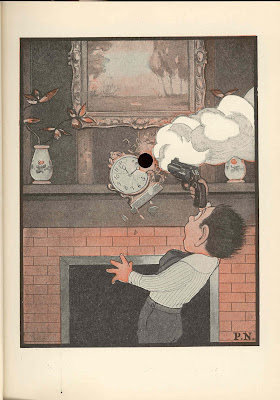 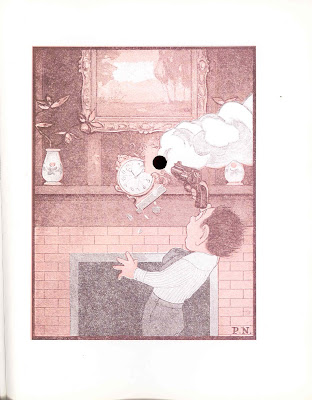 Although several violent and potentially offensive illustrations (including a stereotypical image of "Mis' Silverman") remain in the newer edition, I did notice that one picture was not reproduced: 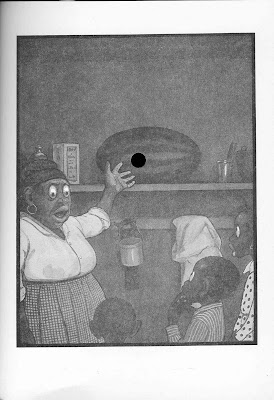 along with its accompanying rhyme, which begins "'Who plugged dat melon?' mammy cried."

I don't have a 1908 copy of the book here, so cannot provide first edition points. Several firsts of the book are available in the $200-$600 price range. Later printings, as well as the Tuttle reprints, can be found for less than $20.

I don't necessarily recommend that everyone run out and track down a copy of THE HOLE BOOK. But those interested in the history of children's books, as well as collectors of novelty books, and NRA members, might want to take a shot at it.
Posted by Peter D. Sieruta at 10:43 AM

I love this book as well as The Rocket Book and The Slant Book. I often show them to my 4th graders who get a kick out of the too. I first came across Newell as a very interesting Alice in Wonderland illustrator. One of my favorite illos is of two hedgehogs fighting (from the croquet game).

I remember this book from grade school (around 1965). The page you show with Mammie always made me laugh. I ordered the book from Amazon.com, but it was a later edition without the 'politically correct' illustration of Mammie. How disheartening!

Thank you for this put up, I've been all the time searching for this convenient articels far and wide but couldn't discover complete data offered here. thank you. and I will just reference a few of you phrases .