Guess Why My Middle Name is Daniel

Go to any charity book sale and you'll likely find shelves and tables crowded with hundred-year-old hymnals, sermons, catechisms, and other religious works. Everybody seems to walk past them. I know I have. I seldom stop to think that these dusty volumes were probably among the few treasured books that our ancestors ever owned. Perhaps they were tucked in a trunk and traveled across the ocean with an immigrant family; perhaps they were carried across this continent by covered wagon. Over generations, they were read by hearth light, candelight, and kerosene lamp. Maybe some children learned to read by tracing the letters on their pages. Then they were passed down through families until, old and crumbling, they found their way to the local charity sale where they sit, rather ignominiously, on the five-for-a-dollar table.

My family's version of the hundred-year-old religious text is this copy of THE WIT AND WISDOM OF THOMAS FULLER. 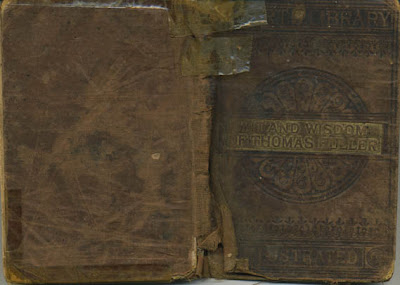 Worn and battered, the cloth binding is crumpled and pulled away from the spine. At some point in time, someone tried to repair it with Scotch tape which, of course, only made it worse. The book is also missing its title page.

There's a reason these books often end up at rummage sales. When you open the yellowed pages and read the small print, the writing seems dense and old-fashioned, the language archaic. Even the section headings in this little volume are off-putting: Good Thoughts in Bad Times. Good Thoughts in Worse Times. The Holy State and the Profane State.

But for those who persevere, some very real wit AND wisdom can be found in these pages:

"Anger is one of the sinews of the soul; he that wants it has a maimed mind."

"He that falls into sin, is a man; that grieves it, is a saint; that boasts of it, is a devil."

"Generally those who boast most of contentment have least of it. Their very boasting shows that they want something and basely beg it, namely commendation."

That's all very sound advice, but the main reason my family cherishes the book is because it once belonged to my maternal grandfather Daniel Sheldon: 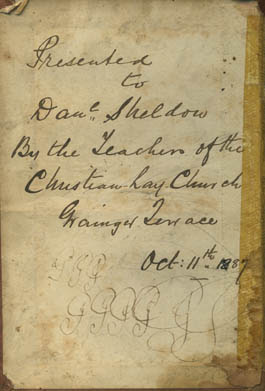 I love the inscription. They talk about us having a rushed society today; did it really save so much time for them to inscribe this book to "Dan'l" instead of "Daniel"? My grandfather was born in 1876 in Durham, England and grew up in the mining towns of Newcastle and Sheffield (where, over a hundred years later the film THE FULL MONTY was set.) This book makes reference to a "Wainger Terrace" or "Grainger Terrace," but I can find neither on a map. My grandfather was eleven years old when he got this book from his Sunday School teachers at the Christian Lay Church (later the Methodist Church) in 1887. Two years later his family immigrated to the United States on a ship called the "City of Chicago" and he brought this book with him. If you look at the inside back cover: 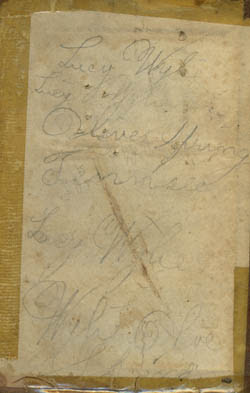 you can see where his sister Lucy signed the book over and over and included the name of the town where their family eventually settled: Oliver Springs, Tennessee. Though her name was Lucy Sheldon, she signed it as "Lucy Wylie." Just found out that Wylie was the last name of the man she later married. Perhaps, like so many young girls back then, she was testing out how her name would look after she got married.... I like how one sibling has his name inscribed in England on the front endpaper and the other signed it in Tennessee on the back. It's a nice "framing device" that mirrors the history of the family -- from England to America.

Of all the things the Sheldon Family brought from England, this is probably the only item that survives. I'm so glad we still have it. Next time I go to a local book sale and see tables full of similar books, I think I'll make a point in stopping to look inside at the inscriptions and signatures that memorialize other people's grandfathers and grandmothers and the often-far away places where they were born and raised. How far did these books travel over the past hundred years? And how did they end up here, on the five-for-a-dollar table?
Posted by Peter D. Sieruta at 11:33 AM