A Confusing Time for Sunday Brunch

Last night I was sitting here typing away when the clock on my computer changed from 1:59 AM to 3:00 AM. I’m assuming this occurred because today was the traditional date for Daylight Saving Time to “spring ahead” and many electronic devices -- manufactured before the government changed the schedule for DST -- were automatically programmed to jump ahead this morning. So check your computers, VCRs, and microwaves, then join us for another Sunday brunch of random thoughts, facts, and opinions about children’s books.

DROPPING BY WITH QUESTIONS

I’m so glad I added a free “Statcounter” to this blog. Every day it keeps track of how many visitors swing by Collecting Children’s Books. (On an average day: about 100. On a day I make a joke about Beezus getting pregnant: about 700.) It also shows why people dropped by, displaying the hyperlink or Google search that brought them here. I’m fascinated to see these strange connections. For example, several weeks ago I raved about Linda Sue Park’s poetry book TAP DANCING ON THE ROOF; now every day people drop by this blog because they’re searching for info on tap dancing. They’re not looking for Ms. Park’s book -- they just want to know about tap dancing! Once I mentioned the famous “cow with a glass stomach” at Michigan State University and every now and then someone will pop in with this query: “Cow. Glass stomach.”

Others drop by with questions about children’s books -- some of which I could answer, but figure it’s not worth the bother since those fly-by-night visitors probably won’t be back again. However, just in case they do come back, here are answers to a few of their questions.

Q. Are there illustrations in SHILOH?
A. No.

Q. Did Laura Ingalls Wilder win the Newbery Medal?
A. No, but she had several Honor Books.

Just yesterday someone left a query in one of the comments section:

“I am in search of a book that I read a couple of years ago. I, of course, do not know the title or the author, but I can give you the general gist of the book. It was about a mother telling how important it was to remember the "last times" in your kid’s life. For example, we remember the first time we held our child, but what we should remember is the last time, cause you don't see them coming and then they are gone. Can you help me?”

I don’t know the answer to this one. It sounds like more of an adult story or anecdote than a children’s book. Does anyone out there have the answer? If so, please post in the comment section below.

IF YOU HAVE A QUESTION ABOUT CHILDREN’S OR YOUNG ADULT BOOKS...

Feel free to write me at Newbery13@aol.com. I may not know the answer (probably WON’T) but I might know where to find it. Or I’ll post it here on the blog in case anyone else can answer it.

By the way, the #1 question about children’s books is usually: What is the name of the book in which a babysitter makes soda pop and root beer come out of the faucets?

The answer is MR. PUDGINS by Ruth Carlsen.

With all those big publishing houses and bookstores, New York City really is “Book Country” -- and every fall they have a big festival to prove it. Thirteen years ago I saw this poster (by James Gurney of DINOTOPIA fame) advertised in Publishers Weekly. It arrived in a cardboard tube, in the rain, and the bottom left corner of the damp poster got torn coming out of the tube, but I’ve had it hanging ever since because I love books, I love New York, and once had a young friend who looked almost exactly like the boy in the poster. My “young" friend is nearly twenty-one now, but the boy in the poster hasn’t aged a day. 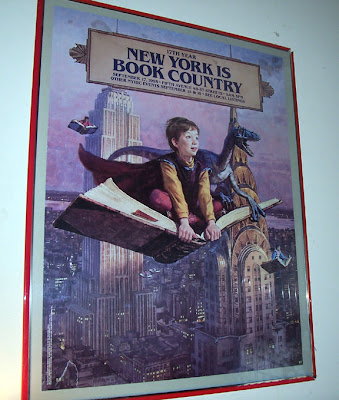 The Pulitzer Prizes will be announced this coming week. I once read that there is a bust of Joseph Pulitzer at Columbia University and every year, as the reporters stand waiting to hear the announcement of the Pulitzer Prizes, some wag (geez, I think I just qualified for AARP by using that word. I’d change it to “rogue” but it’s just as dated) will go up to the bust and yank on its nose while members of the press chant, “Pull it, sir!” This is their reminder of the correct pronunciation of “Pulitzer.” I guarantee, when you hear the announcement reported on the radio or TV this week, the newscaster will nonetheless pronounce it incorrectly as “Pew-litzer.”

Anyway, I guess the chance of the fiction award going to a children’s book is about as likely as snow at South Beach. But maybe it will go to an author such as Joyce Carol Oates (for THE GRAVE-DIGGER’S DAUGHTER) and we can claim her as our own, since she now writes young adult novels -- and pretty good ones at that! 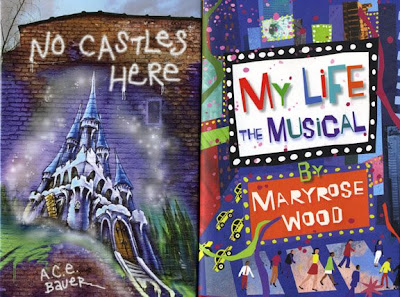 I’m still unpacking bins in my new office and the other day came across several music CDs. One was a Peter, Paul, and Mary holiday album which I began listening to, despite the fact that it’s now April. The song “Light One Candle,” was particularly nice, so I went back and played it two or three times. That night I got home from work and picked up the book I’d been reading, NO CASTLES HERE by A.C.E. Bauer. I had left off at a scene in which kids are auditioning for a junior chorus. I turned the page and the protagonist of the book began to sing...”Light One Candle.” What a strange bit of synchronicity. This kind of thing happens to me so often that I sometimes wonder if Someone is trying to tell me Something....

Another new book I’m reading, MY LIFE : THE MUSICAL by Maryrose Wood, concerns a pair of teenagers -- Emily and Philip -- who are obsessed with a Broadway show and travel into Manhattan each Saturday afternoon to see it. Any teen who loves Broadway will get a kick out of this book. I was intrigued to learn Maryrose Wood appeared on B’way in the 1981 Sondheim musical MERRILY WE ROLL ALONG and have been listening to the recording as I read the book.

THE FACTS AND FICTIONS OF MINNA PRATT by Patricia McLachlan
IF I LOVE YOU, AM I TRAPPED FOREVER? by M.E. Kerr.
IS THAT YOU, MISS BLUE? by M.E. Kerr
TAKERS AND RETURNERS by Carol Beach York
DELPHA GREEN AND COMPANY by Vera and Bill Cleaver
THE PIGMAN by Paul Zindel

BOOK WITH AN ODD LAST LINE

TELL ME IF THE LOVERS ARE LOSERS by Cynthia Voigt

A couple months back I blogged about some of the marketing pieces used to publicize new children’s books. But I had no idea of how extensive and interesting this field was until a new blog-buddy sent me several recent examples: 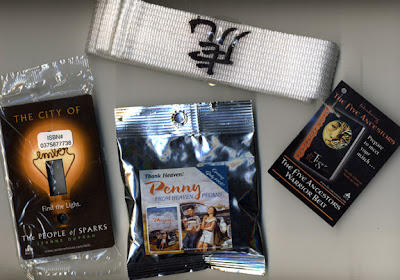 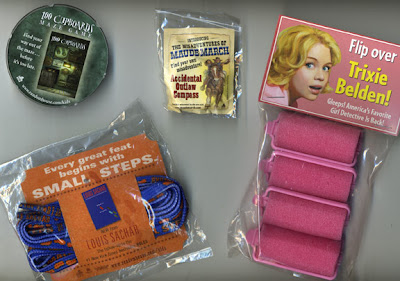 I’m overwhelmed by the thought, creativity, time (and yes, expense) that went into making these items. There’s a light switch plate for CITY OF EMBER/PEOPLE OF THE SPARKS by Jeanne DuPrau, a warrior belt for Jeff Stone’s popular “Five Ancestors” series, and pecans for Jennifer Holm’s Newbery Honor PENNY FROM HEAVEN.

I’d never seen such a varity of promotional items in my life and immediately wanted to rip them open and play with ‘em. Then I reminded myself that the warrior belt wouldn’t fit, those pecans are three years old, and some of us have NATURALLY curly hair and do not need curlers.

Besides, they always say on ANTIQUES ROADSHOW that things are worth more if you leave them in their original packaging. So that’s how they remain -- at least for now -- a fascinating (but unopened) collection of children’ s book ephemera for me to admire and treasure.

FINALLY: WHEN YOU COMING BACK...

We miss you and eagerly await a new book!
Posted by Peter D. Sieruta at 3:50 PM

I've been dying to figure out how to slip in one of the ways people come to MY blog by way of google. It is when someone writes a question about their, um, scrotum. And all they get is this (one of my top posts at the time): http://medinger.wordpress.com/2007/02/23/my-scrotum-week/)

Wag and rogue are not dated words. They're both wonderful words, as words go, and as viable as they ever were. Rogue is particularly lovely. There are many words which are used infrequently but that doesn't mean they're obsolete. In fact, I hate to see words fall out of the language from disuse. The more words we have, the more ways we have to express ourselves. I'd rather have a choice of words meaning essentially the same thing but with, perhaps, subtle variations, than feel I have to chose a word just because it's in common usage. How boring is that!

Nothing to do with children's lit but I had to say something as a word lover.

PS: I love your blog!