Take a look at this cover and then guess what year it was published: 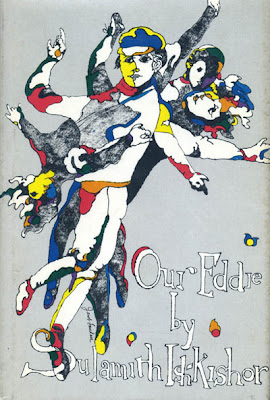 If you guessed "d" you are correct.

I've always been fascinated by how the dustjacket illustrations of children's books reflect their era. I was ten-years-old when Sulamith Ish-Kishor's OUR EDDIE was published and the "pop art" appearance of this cover really did reflect the way the world looked during that era -- in advertisements, on record covers, on billboards.

Despite its "mod" dustjacket illustration, the book was actually historical fiction -- the story of a Jewish family that immigrates to New York at the turn of the twentieth-century and their friendship with a Gentile boy. The book was contemporary in other ways as well, utilizing multiple narrators and an uncompromising plot that features a difficult father-son relationship and the death of one of the young protagonists.

We all occasionally gripe about the Newbery selections, but when the committee selected OUR EDDIE as a Newbery Honor Book, they really got it right -- highlighting a wonderfully-written, character-driven "small" novel that might have otherwise fallen between the cracks.

It may be set in the early twentieth century and the original dustjacket may scream late sixties, but the novel itself is timeless.

Last week I talked about some of the queries that bring people to this blog. Without a doubt, the biggest question continues to be: "What is the name of the story in which soda pop comes out of faucets?" The answer: MR. PUDGINS by Ruth Carlsen.

Then this past week I corresponded with a west coast children's bookseller who told me that his biggest query is about "the old lady who takes off her fingers and the children eat them." The answer: MARY POPPINS by P.L. Travers.

He also gets many requests to identify a story about a boy -- Epianas? Eppiominas? Eppie (no, that was Ann Landers)? Epithias? Epanomas? -- who is sent to the market to purchase something and gets the instructions mixed up. The answer: the folk tale "Epaminondas." There is a little information about the book in the Wikipedia, including a link to the complete text:

During the holidays, I often read articles with titles like "How to Have a Stress-free Christmas" or "Ten Tips for Holiday Hosts." One of the suggestions is usually to wrap a couple extra "generic" gifts and leave them sitting near the tree: "Not only do they make a festive decoration," say the articles, "but when an unexpected guest drops by with a gift for you, you'll have a nicely-wrapped jar of nuts or box of exotic teas right at hand to give them in return."

That's a great idea -- and now I've got another great idea: Keeping extra "sharing" copies of favorite books on hand.

Recently an e-mail friend mentioned several books that I had not read. When someone mentions a book I haven't yet read, my first impulse is always to go out and get a copy. When I told my penpal that I planned to find copies of these books, he told me that he often keeps several extra copies of his favorite books on hand just to share with the unitiated. Soon a package arrived containing "sharing copies" of three titles we had discussed. He had taken them from his "break glass in case of emergency" pile of extras. I can't think of a nicer gesture than giving someone a copy of one of your favorite books and inviting them to join you as one of its select group of readers. It's like being given membership into a very special club. What a gift. It makes me want to keep a pile of my own "sharing books" to distribute to others in the future.

INVITATION TO THE CLUB

When I was a teenager, I wish I had "sharing copies" of Sylvia Louise Engdahl's BEYOND THE TOMORROW MOUNTAINS to pass out to potential friends. I remember being so fascinated by the "big questions" that Noren, the protagonist, was grappling with, that I wanted to talk about the book with someone...ANYone! Every time I noticed the book was not on the library shelves, I was thrilled to think that someone ELSE out there was now reading the novel. I came about "thisclose" to writing my phone number on the last page of the book (in pencil of course -- I was a law-abiding kid) inviting other readers to call me and discuss the book after they'd read it. On the one hand, I'm glad I didn't do it (can you imagine trying to get a job in a library with a charge of "defacing library materials" on your criminal record?) but on the other hand:

NOT "SHARING COPIES," BUT CLOSE...

Though I haven't kept a pile of "sharing copies" before now, I do tend to give the same books as gifts over and over. For many years I gave paperback copies of 84, CHARING CROSS ROAD by Helene Hanff to fellow book lovers. Sometimes people going through sad times got SARAH, PLAIN AND TALL by Patricia MacClachlan. New parents always get Anita Silvey's 100 BEST BOOKS FOR CHILDREN, a fascinating volume that identifies many of the books kids need to know -- and the stories behind them.) And I like to give new babies a copy of I SAW ESAU by Iona and Peter Opie because it contains all the classic nursery rhymes -- plus Sendak illustrations! And later, when I go to visit the new baby, I make sure ESAU is front-and-center in the bookcase. (Then try to hide LOVE YOU FOREVER behind all the other books...under the crib...in the diaper pail...wherever it's unlikely to be found.)

A RAMSEY OF MY OWN

Many recent blog entries have discussed my job in the "Ramsey Room." But just today I remembered (in one of those palm-hitting-the-head-coulda-had-a-V8 moments) that I actually own a book that once belonged to "Miss Ramsey" (as she's still called at the library where I work.)

Apparently, Miss Ramsey did not donate ALL of her books to the Ramsey Room. (Or maybe she also had "sharing copies" of some favorites.) Because a few were given to favored students and acolytes. One of her friends was Helen Southgate Williams, who was also an advocate for children's books. As Mrs. Williams grew older, she sold some of these books to a dealer. Twenty years ago, the dealer called me and said she had a wonderful first edition of CHARLOTTE'S WEB that had once belonged to Eloise Ramsey, later belonged to Helen Williams, and was now up for sale. 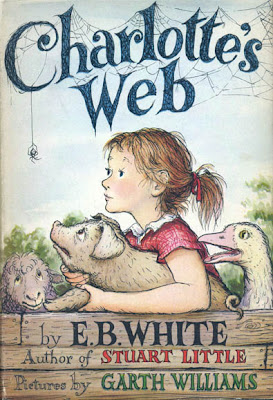 I hadn't heard of either Ramsey or Williams at the time, but of course was interested in purchasing the book. Then I learned it was $165, which was far more than I'd ever paid for ANY book at the time. It seemed like a million dollars to me. However, the dealer assured me that this really was a wonderful copy of the book. Plus I was celebrating a special occasion in my life and figured that CHARLOTTE'S WEB was a way of marking that event. So I bit the bullet and purchased the book. It truly was -- AND IS -- a superb copy of the book.

Here is the Ramsey bookplate on the front endpapers. 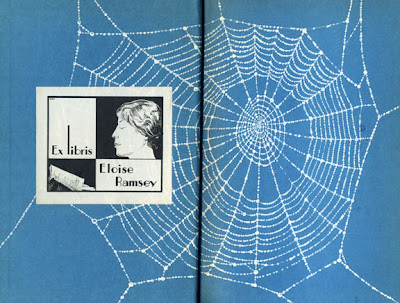 Who knew that twenty years later that book would be worth well over one thousand dollars?

Who knew that one day I'd be working in a room full of 15,000 books, all of them containing an Eloise Ramsey bookplate?

It must have been fate.
Posted by Peter D. Sieruta at 2:56 PM

it is always fun to read your blog, Peter. I have a question that maybe you can answer... I read a book in the late 1970s, which had a black dog named Scurro in it. The protagonist may have been unnamed. They go into another world in which a terrible event is anticipated & the teenager (a girl) calls out "Drujenna, play your harp" and she does.

Does this sound familiar at all? I'd love to track it down again.

The only other recollection I have is that the book was possibly written by someone who was a hippy.

Was that a test? Sarah Big and Tall?

That's a *gorgeous* copy of Charlotte's Web, and worth every penny, even back then. That jacket browned very easily, as I'm sure you know.

What a wonderful bookplate. I think I like that bookplate almost as much as your copy of Charlotte's Web. Very distinctive. Ms. Ramsey seems lost in her book - alert and absorbed.

Kimj: Thanks for the kind words. I'm unfamiliar with the book you're seeking, but maybe someone else can identify it. If not, I'll mention it in a regular blog entry and see if there are any takers.

Anonymous: No, that wasn't a test. It was a mistake -- and a dumb one at that. And it's not like I haven't read Sarah, PLAIN and Tall a dozen times! I went back and corrected it in the blog; thanks for alerting me.

Yes, my copy of CHARLOTTE'S WEB is truly remarkable and I'm so thankful to have it.

All the books from Miss Ramsey's personal library had that big bookplate in them. Now we have a separate, smaller bookplate that goes in all the books placed in the Ramsey Collection. I will have to post a scan of it on my blog someday. It features a night sky and a body of water with a "moon river" running across it, from shore to horizon. Sitting on the beach is a nude figure (please don't tell me it's Miss Ramsey! ...Actually, it looks like a male figure.) sitting cross-legged and holding what appears to be a large conch shell. ...I wonder if this depicts a scene from a children's book that I'm unfamiliar with. I will investigate and write a blog entry on it soon.

I recognized your book which is in my own collection as Ellen Kindt McKenzie, Drujienna's Harp (New York: Dutton, 1971). You can find copies through ILL or through the Internet used booksellers. She wrote a number of children's fantasy novels all of which seem to be out of print. She's well worth searching out and reading.

Jenny, thank you, and I will look it up! Amazing how leaving out just one single letter, the i, could keep me from finding this book & more books by the author. I'll remember that 'i' from now on.