The Twilight of Young Adult Fiction 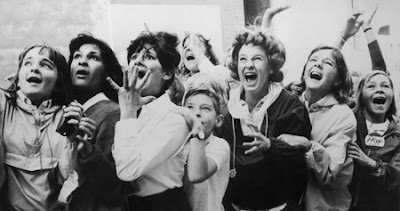 THE SENATOR: Solicitor General Kagan, you had an incredibly grueling day yesterday and did incredibly well. But I guess it means you missed the midnight debut of the third TWILIGHT movie last night. We did not miss it in our household, and it culminated in three 15-year-old girls sleeping over at 3 a.m.

THE CANDIDATE (laughing): I didn't see that.

THE SENATOR: I just had a feeling. I keep wanting to ask you about the famous case of Edward vs. Jacob or the vampire vs. the werewolf.

THE CANDIDATE (smiling): I wish you wouldn’t.

TWILIGHT! It’s everywhere these days. On the cover of every magazine, on the lips of every social commentator and TV talking head. I got a drink at Burger King tonight and there were pictures from THE TWILIGHT SAGA : ECLIPSE printed on the cup.

I was just glad I’d ordered a Diet Coke and not tomato juice.

Although I’m sick of all the bloody hype, I have to admit -- as someone dedicated to books for young readers -- that I was tickled to hear TWILIGHT mentioned on the floor of the Senate. I’m almost certain that this was the first time a young-adult novel was cited, even tangentially, during any Supreme Court confirmation hearing. (I say “almost certain” because it would be just my luck to say “I am certain” and then have some smart aleck consult the historical transcripts and snottily inform me that Oliver Wendall Holmes actually expounded at length on REBECCA OF SUNNYBROOK FARM during his own confirmation hearings.)

I should admit here that I have not kept up with the Stephenie Meyer vampire series. I started to read TWILIGHT when it was first published, but my interest waned somewhere around, oh, page 1184. I did not even pick up NEW MOON or the other books that followed. I was certainly aware the books were popular with young readers, but never anticipated they’d become this huge or that all kinds of adults would jump on the bloodmobile..I mean bandwagon...making both the books and movies a true cultural phenomenon. I don’t really understand it. Frankly, I’m not even sure if minds as wise as Oliver Wendell Holmes’ and Elena Kagan’s could figure out what has made fans so insanely devoted to this series. And since I can’t ask them (Oliver’s dead and Elena’s otherwise engaged), I decided to go right to the source and ask the fans themselves. This evening I waited outside a movie theater offering a sold-out (of course) twilight (of course) showing of ECLIPSE and asked several people in line about their devotion to the books.

First I approached a teenage girl clutching a dog-eared copy of ECLIPSE in her hand.

ECLIPSE FAN: Never heard of it.

ME: --and I’m curious to know your reaction to the Twilight phenomenon. What do you think of the books?

ECLIPSE FAN: I’ve read every one of them twice! They are the best books ever written.

ME: What was your favorite part of the book?

ECLIPSE FAN: I loved the part where Kristen Stewart—

ME: No, that’s not the character’s name. It’s Edward. Edward Cullen.

ECLIPSE FAN: Whatever. My next favorite part is when Taylor Lautner—

ME: Thank you for your time.

I then moved on to a male college student holding a thick psychology texbook.

STUDENT: Never heard of it.

ME: And I’m wondering why you’re a fan of the Twilight Saga.

STUDENT: I’m not. My psych professor told us we should see the movie for class.

STUDENT: Abnormal Psychology. He wanted us to try and figure out the mystique these books and films hold for teenage girls. Why are they so attracted to the idea of being chased and rescued, being bitten, being drained of blood, and being gender-stereotyped victims of vampires and werewolves?

ME: Have you come to any conclusions?

STUDENT: No. My prof says that whoever figures it out will probably win a Nobel Prize someday.

Next I approached a middle-aged woman who had several young adult novels in her bookbag –- none written by Stephenie Meyer.

ME: Thank you! What brings you to see this movie? Are you a fan of the books?

BOOKBAG WOMAN: I can’t stand the books! I’m a writer. In fact, my books are also for young adults—

(To protect her identity, I will only refer to this prize-winning author as the “Bookbag Woman,” but trust me when I say she’s one of the big names in YA books. Think Printz.)

ME: Can I have your autograph?

BOOKBAG WOMAN: Of course. (Signs name.) That will be ten dollars.

BOOKBAG WOMAN: Sorry, a gal’s gotta make a living. Baseball players charge for their autographs. Why shouldn’t writers? Especially poor writers like me, who can’t get published anymore.... (Stifles a sob.)

ME: You can’t get published? You’re one of the most famous authors out there!

BOOKBAG WOMAN: I was. I spent years studying my craft and was so proud of every book I ever published. Then this young upstart Steffi Meyer comes along and writes this mammoth UNEDITED mess of a vampire novel, sells a billion copies, and changes all the rules for YA publishing. Have you seen a list of current young adult books? Every other title is about vampires. There’s no room for anything else. I spent the last three years writing a novel very close to my heart. It was based on my relationship with my younger brother, who died when he was nine and I was twelve. I think it’s the best thing I’ve ever written. I submitted it to my editor last week and today she called to say she didn’t think the book was “quite right for her list.”

ME: I hate that phrase.

BOOKBAG WOMAN: But get this: she said she might be willing to look at it again if the brother died halfway through the book...then came back to life as a vampire in the next chapter. She said we’d change the title from WHISPER ON THE WIND to BROTHERS CAN BE A PAIN IN THE NECK!

ME: Typical editor. ...But if you hate the vampire genre so much, can I ask why you’re here today?

BOOKBAG WOMAN: I’m a writer. I need to be published. Heaven help me, but I’m thinking of following my editor’s advice. I’m here to pick up some vampire tips from the movie. If you can't beat 'em....

Finally, I saw a middle-aged woman getting out of her car wearing a Robert Pattinson T-shirt and a Taylor Lautner baseball cap. Her personalized license plate said “TWI-MOM.”

TWI-MOM: Never heard of it.

ME: Well, you look like you’re a huge fan of TWILIGHT.

ME: Why are you screaming?

TWI-MOM: Because I always scream hysterically whenever I heard the word TWILIGHT. EEEEEEEEEEEEE!

ME: Why are you screaming now?

TWI-MOM: Because I just said it.

ME: Well, can you tell me what you like best about Tw— (stopping just short of saying it)

TWI-MOM: EEE— (stopping just short of screaming again.) What do I like best about it? Everything! The way Kristen Stewart understands, really understands Robert Pattinson, and the way he’s so gentlemanly but conflicted and potentially violent, yet oh-so-romantic.

ME: Actually, I’m most interested in hearing how you feel about the books.

TWI-MOM: Books? Did they make books from these movies???
Posted by Peter D. Sieruta at 9:50 PM

This is HILARIOUS, Peter. I, too, have always wondered what the allure is. I struggled through Twilight and didn't want to read the rest, but was convinced by a fellow bookseller to at least read New Moon and Eclipse. I refused to read the final book, however. They're just not very well-written.

And Bella always bothered me. It's all "oh, Edward, Edward." And she has no interests or hobbies aside from him. No career plans. Nothing.

Apparently, though, the fans don't care. It's romantic and "safe."

I too never finished reading the first book, mostly because I thought it was terribly written with overly dramatic and stereotyped guys and gals. I like vampire books (huge Anne Rice fan) but I like my vampires to be bad and the novels to be good. Being a writer I too have considered writing a vampire/eternal character story, but have found all this fervor has made me very wary of it. Besides, with all those vamire novels, will mine really stand out. I would rather be part of the next popular wave...whatever that may be.

I usually agree with you, but...

I actually thought that Stephanie Meyer wrote a very convincing teenage girl, especially considering that she is a mother of boys. I found the correlation between Bella's eagerness to cast off her mortality to join Edward for eternity and most teenage girls certainty that they will marry their first crush, hilarious.

Of course the movies are awful, needless to say.

Haven't read the books. I have no interest. I'm a bad librarian.

Show the warmth of your love, care and concern for your dear ones in an impressive style by sending our befitting gifts to India. Send Flowers, Send Cakes, Send Gifts for Same Day delivery to over 200 cities & towns all over India. Visit http://www.gifts-to-india.com/delivery_locations.asp.

Umm, I don't know you but a friend of a friend of friend, etc. posted this and, well . . . don't hate me. . . I LOVE the Twilight series. Even I can't quite understand the attraction to it and the hold it has on my literary interests. But this was still absolutely hilarious, maybe because I'm a rational fan so I can make fun of the others. Although you might argue that such a thing exists!

I read the first Twilight book. Not my cup of tea- I just don't get the appeal. (But my daughter has coached me just in case- Team Jacob!)