Brunch in My Library

For the past six weeks, my new home should have had one of these book promos hanging from the front door:

As readers of this blog know, I gave myself a deadline of July 4 to finish unpacking and get things in order.

Well, it took all day, but I finally got most of the boxes moved out of the garage and off the floor of my new library. Then it took me the rest of the day to make my first video ever. Here it is -- the first public viewing of my home library, along with a quick scan of all my Newbery Award and Honor Book first editions:

For those who can't view videos online (and that includes me up until a couple weeks ago), I'm including a few photographs as well. Sorry for the poor quality of some of them: 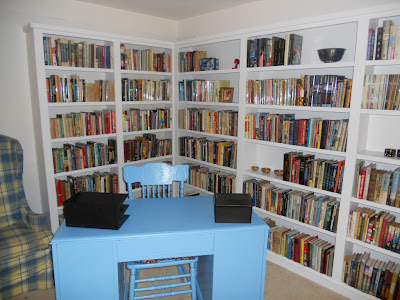 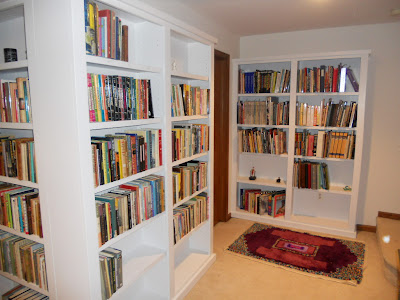 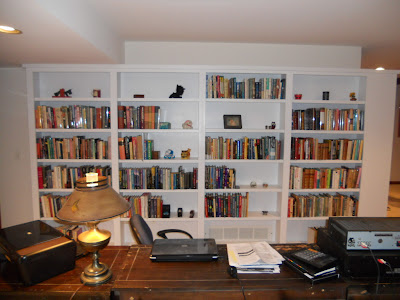 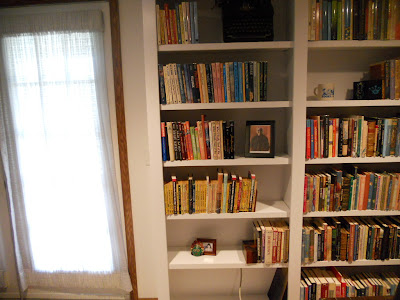 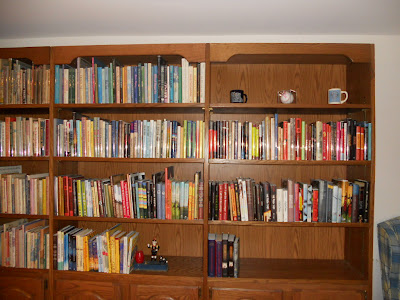 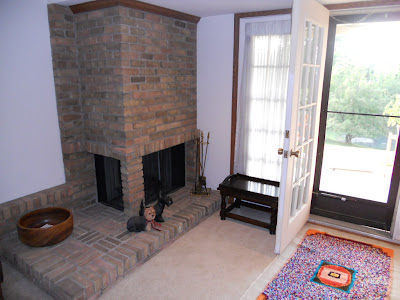 Only one author gets an entire shelving unit to herself -- my favorite writer, M.E. Kerr! 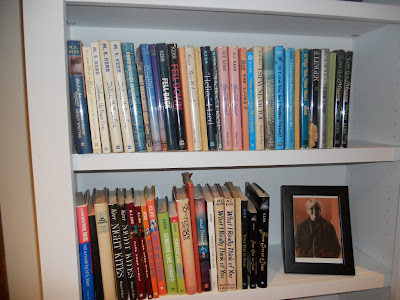 I like reading plays and earlier this week I happened upon LADY IN THE DARK, a musical by Moss Hart. I was surprised to see that most of the text was printed in regular black ink, but certain sections -- dream sequences revealed during the heroine's psychoanalysis -- were printed in red ink.

It was an unusual choice, and something I only recall seeing in one other book, THE PRINCESS BRIDE by William Goldman.

Given the visual nature of most kids, I'm surprised that more children's books haven't tried this device.

Can anyone think of any children's books printed in more than one color?


THERE ONCE WAS A GIRL NAMED JENNY

One of the musical numbers in LADY IN THE DARK is called "The Tale of Jenny" and includes the lyrics "Poor Jenny, Bright as a Penny." The words sounded familiar and I recalled that there was once a YA problem novel by this title. 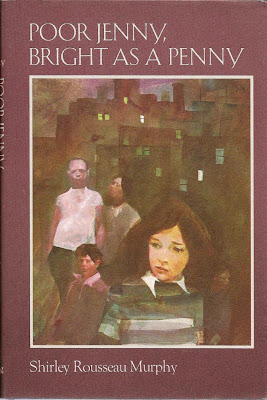 I came upon this book in a very strange way. One day I was looking up something on eBay and noticed that several books by Shirley Rousseau Murphy were on sale -- and you could have them personally inscribed. Thinking that Ms. Murphy herself was selling the books, I ordered POOR JENNY, BRIGHT AS A PENNY as well as the intriguing TOWER OF GRASS. In my bid, I told the author how much I had enjoyed her books in the past.

As it turned out, Ms. Murphy was not selling these books herself. Instead, the sale was being negotiated by Sylvia Louise Engdahl -- another equally well-known author (and also Ms. Murphy's webmaster.) So I ordered the books from Ms. Engdahl, who sent the info on to Ms. Murphy, who signed the volumes: 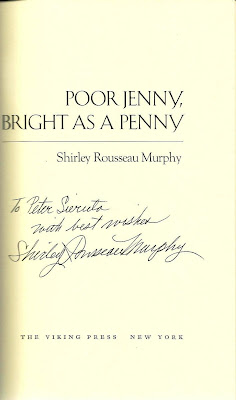 NEWBERY IN THE NEW YORK TIMES

There was an interesting article by playwright Theresa Rebeck in the New York Times earlier this week. In the piece she asked if a play can be "too funny."


The passage that caught my eye said: "It's a bit of a balancing act — you need to land a laugh early, then build, keeping the laughs interspersed so that the entire enterprise stays afloat. It’s like that raft that soared through the air with the 21 balloons when Krakatoa blew up. All the balloons have to be equally full of hot air, or the raft will tip, and the people will fall off. You don’t want the people falling off. You want them listening with delight, and then erupting into laughter all at the same time."

I wonder how many readers wondered about the Krakatoa reference. Did they think it was an historic fact, or did they realize she was citing the 1948 Newbery winner, THE 21 BALLOONS by William Pene Du Bois?

Since I've spent this entire day cleaning and unpacking, today's blog is shorter than average. Thanks for sharing your holiday weekend with Collecting Children's Books.

...Oh, and if you're wondering what happened to all those boxes and bags I unpacked this week?

Well, let's just say you'd be wise not to open the doors of the basement storage room, the hall closet, the laundry room, or my bedroom closet!

In fact, I think I'd better hang this book promo item on the doors of each of those places:

I'm impressed-and you seem to have room for more books!Hope you are having a relaxing 4th! Pat H

> Can anyone think of any children's books printed in more than one color?

You gotta be trolling, but I'll bite ;)

Thanks so much for the lovely pics and video - I love looking at libraries!

I also have the copy of the Neverending Story that is beautifully done in green and red ink (isbn: 0713915099). Can you tell me which edition of Princess Bride is two-colour?

(And you may wish to fix the typo in the post as I *know* you know PB is in fact by William, not James Goldman)

Wow!! What a beautiful library, and home. Congratulations!

so jealous of those beautiful shelves!

print in different colors: THE NEVERENDING STORY, while not published as a children's books did become a children's movie so is now thought of as a kids book by some. So does that count? The original hardcover had red and green ink, one color being the story Bastian was reading. In the first paperback, that was changed to regular and italics with no change in the book (which referred to the color of the text Bastian was reading so it really worked on a semi meta experience). I haven't read/ looked at any of the other editions.

Hi ..what an absolutely stunning blog. I came across this one while 'image googling' Children's Book, 365 Stories. And to your blog was where it led!Your May 22 2008 post to be precise. I was trying to help out a fellow booksearcher who had posted on the Library Thing name that book group. I've only just joined this site and was amazed to see that you had too. I love book blogs..hope you don't mind, I've added you to my favourites! Best Wishes, Karen.

William Faulkner wanted to use different colored ink to show the different narrators in The Sound and The Fury.

Congratulations! Your library is an inspiration--beautifully organized, room for more books, and what a collection!
leda schubert

Different colors:
The (awesome)Popularity Papers by Amy Ignatow!
One girls writes in black ink, the other in blue.

What a beautiful library!

Keep up the good work. Best of luck. From www.indiafloristnetwork.com.

WOW! Your library is so beautiful and has such a relaxing, peaceful feeling, not to mention the view out the window/door. What a lucky man! Where did the blue desk come from!?

I loved the tour, though I couldn't help thinking that if you'd held your camera on its side, I could have read all the titles! I did spot a few, including CRISS CROSS, by Lynn Rae Perkins, who lives just down the road a piece in the next village here in Leelanau County, Michigan. And were they two copies of GINGER PYE, one of my all-time favorites? Yes, it does look like you have shelf room to spare, but we all know how quickly those shelves will fill. Still--a view out to a pond! Looks like heaven!

Nice digs! Thanks for the video of your famous collection - so cool to see in living color.

Nice collection of children Book.
Thanks for sharing.
from
http://www.indiangiftscenter.com