Every now and then a well-known person “of a certain age” will experience an explosion of renewed public interest.

With RAMONA AND BEEZUS opening at movie theatres last weekend, the name “Beverly Cleary” was on the entertainment page of nearly every newspaper from coast to coast. The 94-year-old author appeared at a premiere of the movie riding a golf cart decorated with ribbons. She was written up in “Walter Scott’s Personality Parade.” She was even interviewed by PEOPLE. According to the latter publication, Ms. Cleary had three steadfast rules for the new film:

No gadgets, no slang words, no trendy clothes. Cleary wanted to ensure that RAMONA AND BEEZUS remained timeless, so she nixed anything that might date it. "Kids today feel like the books were written currently," says [the movie’s director.] "Every generation thinks the books are theirs. It's amazing."

The author said in another interview:

I don’t really think of my stories as taking place in any particular time. However, they do take place in a real neighborhood in which I grew up and which I still visit. It’s really a remarkable neighborhood. It’s changed very little since I lived there. […]I think about this place as I write, but the children in my stories now wear pants if they want to -- that wouldn’t have been permitted in my day -- but those are minor things.

Ever since HENRY HUGGINS was published in 1950, readers have used the word “timeless” to describe Ms. Cleary’s books. I’ve used that term myself.

But then I remembered Henry Huggins’ favorite piece of “trendy” clothing from the early volumes -- a coonskin cap: 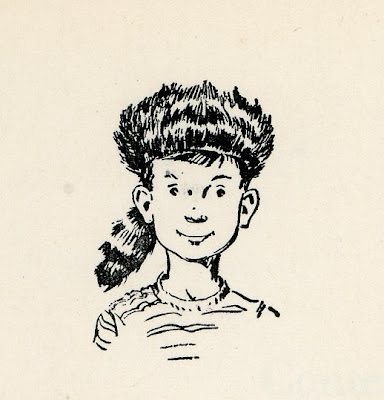 Though the Daniel Boone fad has been over since the Eisenhower era, Henry has continued wearing that coonskin cap for decades.

Oh, and speaking of “trendy clothes,” he sometimes also wears a fifties-style beanie; I think it may even have a propeller on top: 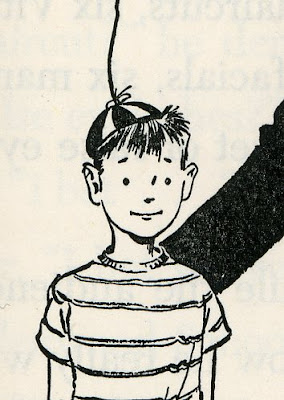 Actually, reading Cleary’s books about Henry, Beezus, and Ramona today, one discovers that they do, often subtly, chart the changing American landscape during the last half of the twentieth century.

Sometimes it’s simply a matter of dated prices (10¢ for bus fare, $59.95 for a new bike) or words which have fallen out of fashion (will kids today understand the humor of Henry being called “Sir Cuspidor” by his classmates? And what are “lugs” of apricots?)

At other times the books mark changes in society. With the publication of RAMONA THE BRAVE in 1975, Mrs. Quimby becomes a working mom (“Just think! You’re going to be liberated!” Beezus enthuses.) Also, one can’t imagine the “Beezus, Jesus” incident occurring in any of the “Ramona books” prior to the 1970s.

For books that span a sixty-year period, they hold up incredibly well in terms of “political correctness.” Only one scene from an early volume may make readers cringe: Henry dressing up in blankets and warpaint for Halloween and raising his hand to utter the stereotypical Indian greeting, “How.”

Some old-fashioned slang (“Jeepers!”) creeps into the early books, but disappears in later titles.

What surprised me most were the many dated references to television commercials in Cleary's books.

Early in the series, the author seemed to have a lot of fun skewering the huckster-hosts of children’s TV shows:

“I want all you little folks out there in T.V. land to do something for old Sheriff Bud. [...] I want you to tell Mother right now, right this very minute, to put Crispy Potato Chips, the potato chips positively guaranteed never to bend, on her shopping list. Yes, sirreee,this very minute.” His smile filled the whole screen.

“I don’t care what Sheriff Bud says,” answered Mrs. Quimby from the kitchen. She sounded very cross. “I can make out my own grocery list without that man’s help.”

Scattered throughout the early books are fun fictional commercials that Ramona parrots, such as “Nutsies give both children and adults quick energy. Avoid that mid-afternoon slump with a Nutsie, chock-full of protein-rich nuts.” Or the song:

Crispy Potato Chips are the best
North or south
East or west
Crispy chips, hooray,hooray!
Get your Crispy chips today!

Even Henry gets into the act, singing a dog food commercial at the end of HENRY AND RIBSY:

Woofie’s Dog Food is the best,
Contains more meat than all the rest.
So buy your dog a can today
And watch it chase his blues aay.
Woof, woof, woof, Woofies!

However, in the later books, the author pokes fun at real television commercials running at the time these stories were written. In 1979’s RAMONA AND HER MOTHER, Beezus relates an incident in which a classmate taking a spelling test spells the word “relief” R-O-L-A-I-D-S. (During the late seventies, a popular television commercial used that slogan.)

And 1977’s RAMONA AND HER FATHER contains a scene in which Ramona watches several then-current commercials on television:

She saw a boy eating bread and margarine when a crown suddenly on his head with a fanfare –- ta da! -- of music. She saw a girl who asked, “Mommy, wouldn’t it be nice if caramel apples grew on trees?” and another girl who took a bite of cereal said, “It’s good, hm-um” and giggled. There was a boy who asked at the end of a weiner commercial, "Dad, how do you tell a boy hot dog from a girl hot dog?” and a girl who tipped her head to one side and said, “Pop-pop-pop,” as she listened to her cereal. Children crunched potato chips, chomped on pickles, gnawed at fried chicken. Ramona grew particularly fond of the curly-haired little girl saying to her mother at the zoo, “Look, Mommy, the elephant’s legs are wrinkled just like your pantyhose.”

Later in the book Ramona makes herslf a crown out of burs, places it on her head (ta da!) and needs to have it cut from her hair. She also insults her teacher by saying, “Mrs. Rogers, your pantyhouse are wrinkled like an elephant’s legs."

But these examples pale when compared to 1981’s RAMONA QUIMBY, AGE 8, which contains an entire chapter, “Ramona’s Book Report” in which the protagonist delivers an oral report in the manner of a TV commercial, having classmates sing “Meow, meow, meow, meow” in the background (a jingle from an eighties TV commercial for “Meow Mix” cat food) and finishing with a take-off on that era’s Alka-Seltzer tagline: “I can’t believe I read the whole thing!” 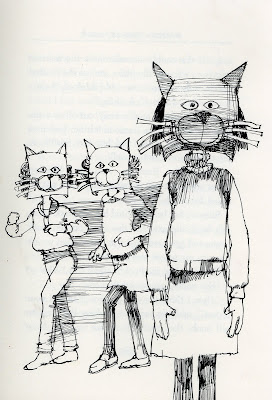 Kids who read these books upon publication had the fun of recognizing familiar TV commercials within their pages. But do these scenes still work for young readers today? Is Ramona’s book report just as funny for a kid in 2010 who doesn’t know the tune of that “Meow, meow, meow, meow” jingle, or is the scene still humorous within its the context of the story?

My guess is that, even if these scenes don’t work as well for contemporary readers, they are minor speedbumps like Henry’s coonskin cap or Beezus’s occasional exclamation of “Jeepers!”

Because, in truth, it’s not these small details that make Beverly Cleary’s books “timeless,” but rather her enduring themes and emotionally accurate depictions of children that bring as much enjoyment to readers in 2010 as they did in 1950.

...And come to think of it, in this age of Youtube, computer-savvy kids (and aren’t ALL kids computer-savvy these days?) can always go back and watch the original commercials for Rolaids, Leggs Pantyhose, Imperial Margarine, and Meow Mix that Ms. Cleary is satirizing in her books.

She must have known these commercials would never truly go away.

Who knew she was so prescient?

I guess her books are more timeless than I ever imagined!
Posted by Peter D. Sieruta at 9:54 AM

. The visit was useful. Content was really very informative. From http://www.hongkongfloristshop.com

Current commercials for Meow-mix and Rolaids use the same slogans/jingles as in the Ramona books...
http://www.meowmix.com/commercials/default.aspx
http://www.rolaids.com/
Cleary must have an eye for good advertising.

I think those details, while missed by kids, don't lessen the humor. The stories and characters are so genuine that they do transcend generations.

Peter, this was such a wonderful post! I have to admit that when I read Henry Huggins, I had to find out what a cuspidor was.

Love Beverly Clearly. She's definitely one of those who will never go out of style. Judy Blume, too.

have had a very successful career

poems and haiku my love affair

with words language & stories can

be traced back to that day a week

after jfk was murdered when i found

my first henry huggins book in the

bev cleary i bow to you i thank you