A Light Brunch before the Newbery-Caldecott Banquet

Those who remember my vow of being completely unpacked and "moved in" by Independence Day will understand if today's blog is shorter than usual. How can I serve Sunday Brunch when a chorus of books in the basement is shouting upstairs, "Shelf me!" "No, shelf me!" "I was here first!" "Shelf me next!"

Then there are jugs of windshield wiper fluid, cans of Turtle Wax, and containers of Tide detergent and Clorox on the garage floor, demanding to be put in their proper places. The bottle of kerosene threatens, "Get me in the cupboard by July fourth, buster, or I'll really show you some fireworks!"

So I've got exactly one week to get organized here.

It wouldn't be so bad if every item was large, had a designated purpose, and had a place waiting for it in the house -- like a lamp.

You just pick one up from the floor of the garage -- and look what a fine empty space it leaves behind! -- bring it into the house, set it on the table, and -- voila! -- you feel like you've really accomplished something.

But what bugs me are the boxes filled to the brim with a lot of miscellanous stuff which will take forever to sort and put away: 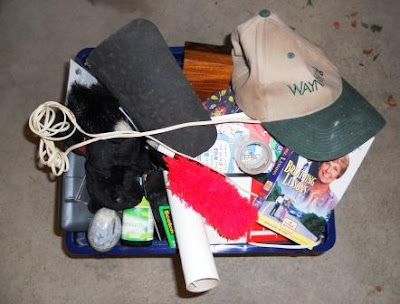 And who's bright idea was it to "kill two birds with one stone" by hauling over loose items in a cooking pot? 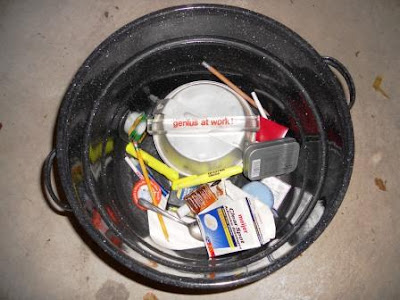 Oh yeah, it was my idea.

But not a very good one.

Meanwhile, I went down to get the mail yesterday and discovered a dead rabbit in the driveway. It's a wide driveway, shared by four homeowners, and the inanimate animal certainly wasn't in my portion of the drive (I Brake for Bunnies!) Two of my new neighbors were standing outside chatting and since I am very shy and can never think of what to say to people until hours and hours after-the-fact, I just blurted out the first thing that came into my head: "Hey, there's a dead rabbit in the driveway!" (Hours and hours after-the-fact, it dawned on me that, "Hello, how are you?" might have been a good alternative.)

Neighbor #1 said, "Someone needs to get a shovel and remove it."

She gave me a look and I knew exactly which "someone" she meant. So I went into the garage, got a snow shovel and a Hefty bag, and returned to the scene of the crime. That's when Neighbor #2 spoke up: "Oh, don't just throw him away! Take him around back to the pond."

"You want me to throw him in the water?"

"No, just lay his little body down in the tall grass under the trees...so he can rest in peace." (Clearly, Neighbor #2 is the sentimental sort.)

As I made my way around the back of the condos -- a one-man funeral procession solemnly carrying a loaded neon-orange snow shovel straight out in front of me -- I thought, "There are probably other people in the world who, at this very moment, are disposing of dead rabbits. ...But I'm probably the only one doing so while thinking of Br'er Rabbit, Little Georgie, Uncle Wiggily, Hazel, Bunnicula, the March Hare, and Flopsy, Mopsy, and Peter Cottontail."

...at least not for Rebecca Stead and Jerry Pinkney. Tonight's the night they receive their Newbery and Caldecott awards for, respectively, WHEN YOU REACH ME and THE LION AND THE MOUSE at the American Library Association convention in Washington, D.C.

Susan Cooper, who won the Newbery for THE GREY KING, once described these annual award winners as "Midsummer Monarchs" and I, for one, will be anxious to hear all the reports about our newly-minted King and Queen of Children's Books and their royal banquet this evening. What will be served for dinner? What kind of program, novelties, and gifts will given as party favors to the guests? Will anyone be kind enough to send me one for my collection? (Notice how I just slipped that one in there?) What will the speeches by like? Will Mr. Pinkney get a standing O for finally receiving the Caldecott after five Honors? Will Ms. Stead thank Madeleine L'Engle in her speech?

In order to get this info, I guess we'll have to rely on reports from the bloggers who were lucky enough to attend this year's festivities. I know that Betsy from Fuse #8 is there, as is Travis from 100 Scope Notes, Liz from A Chair, A Fireplace & a Tea Cozy, Tom from Berger & Burger -- plus many more.

But this does bring me to a question.

The technology now exists to broadcast the N/C ceremony live over the internet. If you could watch it on your computer, would you do so?

What if they charged a fee for viewing it?

Tickets to the event cost $94. Would you be willing to pay a fee to view the N/C ceremony live, if the money went to the ALA or, better yet, to a children's literacy program or, best of all, was used to purchase children's books for a public library?

If so, what do you think a fair price would be? The $94 includes a meal, dinner service, banquet favors, plus the opportunity to rub shoulders with Rodman Philbrick and Marla Frazee (or at least view them across a crowded room.) Staying home and watching the event on the web while eating a Big Mac isn't quite the same, but I'd still pay maybe $20 or $25 for the privilege.

What do ya say, ALA?

Want to offer the N/C ceremony to the children's book fans over the net next year AND make some money for the nation's libraries?

Remember bratty Nellie Oleson from TV's LITTLE HOUSE ON THE PRAIRIE? Played by actress Alison Arngrim, Nellie was such a venomous villian that many people are unaware that she was not just the flashy creation of television writers, but -- unlike a lot of denizens of TV's "Walnut Grove" (we're looking at you, Hester Sue!) -- she originally appeared in Laura Ingalls Wilder's "Little House" books.

Now Alison Arngrim is spilling the beans on her LHOP years in a funny and surprisingly well-written memoir called CONFESSIONS OF A PRAIRIE BITCH : HOW I SURVIVED NELLIE OLESON AND LEARNED TO LOVE BEING HATED. I was especially interested to learn that Alison Arngrim had never read the Wilder books before trying out for the show...first for the role or Laura, then Mary, and then some months later, Nellie Oleson. After killing them at the audition, she is offered the role almost immediately. She writes:

We had to start shooting so quickly after my audition that I had no time to cram, no time to read the LITTLE HOUSE books for more perspective on what I was doing. It was actually weeks before I went out and bought a copy of ON THE BANKS OF PLUM CREEK. When I read it, I was shocked; it was pretty slow and boring.

[How dare she diss our beloved Little House books? I'm beginning to think she titled her memoir quite accurately.]

But the Garth Williams illustrations were dead on. When I saw the picture of Nellie clutching her doll away from Laura, it looked exactly like me. She had my nose. It's just spooky.

[Not really spooky when you consider the producers probably cast her in the role because she favored the illustrations of Nellie. Still, to be fair, they didn't cast the other roles to resemble the characters in the books, starting with clean-shaven Michael Landon, who looked nothing like the bearded Pa in the novels.] 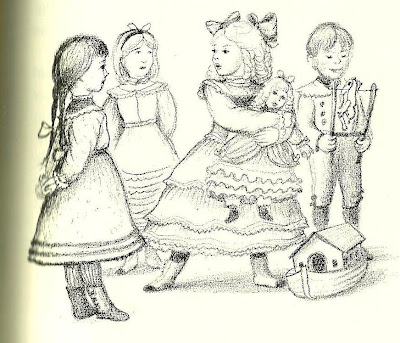 Ms. Arngrim's book contains other information about adapting the books for the TV screen and even reveals the real-life girls who inspired Laura Ingalls Wilder in her creation of Nellie. For example, there's one Genevieve Masters who, although "much of Nellie's nastiest deeds in the book were based on her" went unnamed in the books because "rumor has it that Genevieve's family was in publishing, and since Laura wanted her books published, she decided to cover up Miss Masters's misdeeds and blame them all on Nellie Oleson."


IN OTHER TV NEWS

As one of Hollywood's most famous up-and-comers, James Franco shocked everyone when he announced he was abandoning his film career for a couple months to appear on the
TV soap opera GENERAL HOSPITAL. Some thought he was doing it as a prank, or to fulfill requirements for his master's degree at New York University's Tisch School of the Arts, but reportedly he is just joining the show "for the experience."

What does this have to do with children's books?

Well, I didn't know until recently that James Franco's mother is Betsy Franco, author and editor of a wide variety of children's books, including POND CIRCLE, SUMMER BEAT, MATHEMATICKLES, and METAMORPHOSES : JUNIOR YEAR.

Now comes word that the acting bug has bitten Betsy and, starting later this week, she will be appearing on GENERAL HOSPITAL with her son: 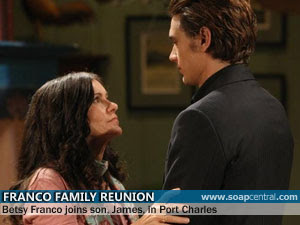 IS THIS ENTIRE BLOG ABOUT TV TODAY OR WHAT?

One more children's book related item. Last night I watched an episode of TV's ANTIQUES ROADSHOW. Filmed last summer in Providence, Rhode Island, one of the items brought in for appraisal was an old copy of ANNE OF GREEN GABLES by L.M. Montgomery. The appraiser identified the book as a first edition because the date 1908 appeared on the title page (in Roman numerals) and the verso stated, "First impression, April 1908."

The woman who brought the book in had picked it up at a flea market for less than five dollars. The antiques expert advised her that it was worth between $12,000 and $18,000! He added that a copy had recently sold for $20,000.

Some months later, in December of 2009, a first edition of ANNE OF GREEN GABLES was auctioned at Christies in New York -- and sold for $37,000.

I suspect that the ANTIQUES ROADSHOW woman decided to sell her copy...

Well, I'm going back to unpacking. But I'll probably be taking a few breaks to check on tweets and blogs from ALA. Maybe next year we can all be there together...either in person, or gathered around our computer screens watching the festivities on the web. Thanks for visiting Collecting Children's Books. Hope you'll be back!
Posted by Peter D. Sieruta at 10:48 AM

Alas! I was not there to see it!
I had to split to do a booksigning in a WaWa parking lot! No lie!

But while at ALA today I did get to chat with one of tonight's Royal Court ... the WONDERFUL Grace Lin!

Peter, standing ovations for the Newbery and Caldecott winners have been required elements at the banquet for several years. They used to be occasional, but I guess children's lit has suffered from the same grade inflation as everything else!

I noticed you collect Newbery first editions. I heard a friend of mine say they have a copy of Dark Star of Itza (first ed.), should they sell it?

I just saw on the Sotheby's website in New York that the are selling a Anne of Green Gables in the very scarce dutjacket. The auction is Dec. 10, 2010. The estimate is $30,000. They also have a rare first of Anne of Avonlea in the dustjacket with an estimate of $15,000. The Anne of Green Gables dustjacket has to be one of the earliest know examples.I have collected Montgomery first edition for almost 40 years and have never seen a dustjacket that early!