Cloudy with a Chance of Hope

Twenty-two years ago, on a hot Sunday night, an airplane fell out of the sky.

We’ve all seen air-crash stories covered in the media -- films of tangled, smoking metal...the desperate search for survivors...the endless investigations into what caused the tragedy.

What made this accident different for me is that it happened just outside my hometown. It was the first time such a disaster had occured at Detroit’s Metropolitan Airport. Everyone seemed to know somebody who had flown out of Metro that day or who was due in later that night. Everyone had a story to tell. Northwest Flight 255 crashed just seconds after take-off and the carnage spilled across Middlebelt Road, a major thoroughfare that cuts a swath through our western suburbs. In the coming days I would drive down Middlebelt, passing all the usual stores and schools and houses in my own neighborhood, well aware that just fifteen miles to the south, this same road was covered with recovered bodies, lined up in neat rows.

One hundred and fifty-six people perished in the accident, but there was one survivor: a four-year-old girl who had been traveling with her parents and brother. It seemed like a miracle. There were daily updates about her condition in the newspapers and she eventually appeared on the cover of LIFE magazine. Most of the articles mentioned that her favorite book was CLOUDY WITH A CHANCE OF MEATBALLS, written by Judi Barrett and illustrated by Ron Barrett. I believe she’d even taken the book with her on the plane that day.

A couple months later, I happened to see a copy of CLOUDY WITH A CHANCE OF MEATBALLS at the bookstore, so made a point of reading it. I wondered if the little girl would always remember her deceased mother and father reading this entertaining and silly story 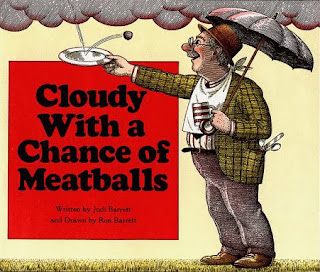 to her when she was very young. I wondered if the relatives now planning to adopt her would get her another copy of the book. Would it remain her favorite childhood story for the rest of her life?

It would be ironic if the little girl, now grown and married, has completely forgotten about this book...because I certainly have not. Every time I see CLOUDY WITH A CHANCE OF MEATBALLS in a bookstore or library, I recall that terrible accident at the airport less than fifteen miles away. Lately I’ve been seeing commercials for the forthcoming movie version and that’s made me think about the event even more. I think about the random nature of tragedies, and what a fragile hold each of us has on life. And how occasionally one person -- by chance? by design? -- somehow gets a second chance.

Of course I realize that even the book in question is random. If the little girl's favorite had been IMPOSSIBLE POSSUM or JUMANJI, those would be the titles I'd now be associating with that long-ago plane crash.

Today when you drive down Middlebelt to the airport you will notice a large memorial for Flight 255 on the side of the road. It features a picture of a dove and the names of all the victims. At various times of the year you may see flags or flowers or stuffed animals on the ground around it. It's one way of honoring those who died in the tragedy, but I find it unsettling. After all, the only time most of us see this memorial is when we’re on our way to the airport to take a trip or drop off a friend or family member. No one wants to even THINK of airplane crashes at those times! So I usually avert my eyes when driving past. Instead of looking at the memorial and remembering the scores who died, I prefer to think of the book as a symbol for the one who lived. It makes me realize that even in the worst kinds of tragedies, there's always the possibility of hope, always a chance of miracles.
Posted by Peter D. Sieruta at 8:40 AM

What a lovely tribute to a book and memory of a time when tragedy hit close to home. In recent years (since 2001), I find these kinds of elegies especially moving this time of year. Thanks for sharing your thoughts with us.
Chris in NY

Wow. I am just browsing all the short listed blogs this morning and this post brought tears to my eyes.

This is wonderful writing.

i think jumanji is a good movie

I once worked at an airline, and of course part of the training was to watch crash videos and view photos of crash sites. It was a necessary evil but I will never forget it.

The little girl in question from NW 225, if I am not mistaken, was from Phoenix, and the Arizona Republic ran a story about the anniversary of the crash (no doubt two years ago on the 20th anniversary). Lord, that was a terrible, terrible tragedy. I've seen the picture of the freeway in the aftermath and it is just chilling. I hope that the girl did gain some comfort from her favorite book...

We are online florists and we help you to send Gifts and flowers to your dear ones to India. We undertake same day delivery. We have a wide Range of Gifts are available for all kind of Occasion. http://www.giftwithlove.com