In that post-apocalyptic novel, teenage Katniss participated in a televised fight-to-the-death match against twenty-three other young “tributes” from each of the nation’s twelve districts. When her fellow tribute Peeta declared his feelings for her, their love story -- and subtle rebellion against the rules of the Games -- captivated the public and resulted in the pair winning the competition and returning home as heroes. In CATCHING FIRE we learn that the single act which saved the lives of Katniss and Peeta during the Hunger Games was viewed by many as a show of defiance against government authority and has, in turn, led to citizen uprisings against the Capitol. When the president announces that the Quarter Quell -- a “glorified version of the Games” held every twenty-five years -- will be fought by previous winners 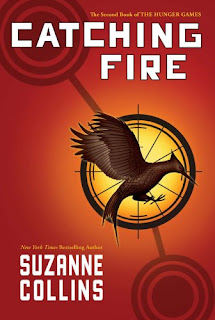 of the competition, Katniss and Peeta again find themselves battling for survival in a contest against rivals who range from superb athletes to the aged and infirm. The scenes depicting these bloody games could have easily devolved into a retread of material from the previous book, but Collins keeps things fresh with some wild new challenges (poisonous fog; attacking monkeys) and additional layers of psychological and emotional anguish as Katniss resolves to face certain death in order to keep Peeta alive. And though the scenes of spear-throwing and hand combat are viscerally exciting, we never forget that the story has a far grander purpose and that Katniss and Peeta are fighting a war against their authoritarian government as well. Most readers will be so caught up by the novel's accelerating pace, unexpected plot twists, and gut-wrenching thrills-and-chills that they will easily forgive the occasional cliche ("laughing our heads off") and the abrupt, somewhat confusing, conclusion. It’s hard to imagine anyone finishing CATCHING FIRE and not glancing at the calendar, anxiously wondering how long we must wait until the third and final volume is released.
Posted by Peter D. Sieruta at 1:59 AM

Oh, I just started reading Catching Fire last night. I can't wait until bedtime to get back to it.