Every now and then -- probably no more than once or twice a year -- my father would come home from work with a special treat for us.

A couple hours after dinner, he’d bring a white drugstore bag into the living room and turn it upside down over the table. Out would tumble 3 Musketeers, Almond Joy, Nestle Crunch, Baby Ruth, Milky Way, Oh Henry, 5th Avenue, Butterfinger, Clark Bar -- every type of candy bar you could imagine.

My brother and I stared at the table trying to decide which to pick first. Well, we knew the Powerhouse went to our mother; that was her old favorite. But after that -- what to pick, what to pick? It was like being at a candy cafeteria with an overwhelming number of choices.

After a lot of thought and debate and second-guessing, we'd each make a selection. And a little while later we each got to choose again. Is there anything better than two candy bars...on a school night...for no special reason at all? Making our second selection was even harder than the first. There were fewer choices left and nobody wanted to end up with the Bit-o-Honey (the paper wrapper always stuck to the candy) or the Chunky, which was way too small, plus had raisins in it. So the second round of choosing always involved a lot of bartering ("Wanna trade half a Baby Ruth for half my Milky Way?") and fighting ("Hey, who took a bite outta my Butterfinger?")

The other occasional treat my father brought home from work was books. Besides being located near a drugstore with a well-stocked candy counter, his office also had a nearby Goodwill shop where hardcover books could be purchased for just ten or twenty cents a piece.

Every now and then -- again, not more than a couple times per year -- he would bring home some children's books from this store. That's how I first encountered Toby Tyler and Henry Huggins and the Boxcar Children. We also ended up with a few school readers. Of course back then we didn't even know they were textbooks, but just considered them volumes of short stories.

The other day I blogged about first encountering the MacKinlay Kantor story "Angleworms on Toast" in a schoolbook, then later finding the book-length edition, which contained some surprisingly politically-incorrect material. Blog-reader Jennifer wrote to say, "I remember Angleworms on Toast...but not the racist bits. Which, checking back, is no surprise because I know the story from Treat Shop, an old reading textbook edited by Eleanor Johnson. And in this anthology, there's a different illustrator, Sandra James, and the offensive parts have been cut out - it just says "the cook turned green" and she's later shown as white with red hair. Wonder what else was cut out?"

Reading Jennifer's note, I bolted upright in my seat.

I remembered the book well...it was, in fact, the very book where I first read "Angleworms on Toast." 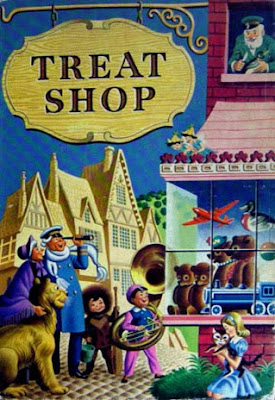 TREAT SHOP was one of the books my father picked up at the Goodwill way back in the early sixties and it had such a ubiquitous presence in our house that, thirty years later, my non-reading brother looked at some blue-and-gold gift wrap on a Christmas present and said, "You know what this wrapping paper reminds me of? That book TREAT SHOP we used to have."

I'm sure TREAT SHOP and other Goodwill finds helped get me interested in reading long before I started school and actually had to deal with textbooks in any kind of serious way. We also had a grubby yellow volume -- title long forgotten -- which, if I recall correctly, had engraved sunburst patterns all over the front cover. I can still remember two of the poems from this book. One was "The Moon's the North Wind's Cookie" by Vachel Lindsay:

The Moon's the North Wind's cookie
He bites it, day by day
Until there's but a rim of scraps
That crumble all away.
The South Wind is the baker
He kneads clouds in his den,
And bakes a crisp new moon that ...
Greedy.... North.... Wind ....eats....again!

(Can't believe I remembered the whole thing and only had to Google the last line!)

The other poem was called "When a Ring's Around the Moon" by Mary Jane Carr and began:

The wee folk will be tripping,
In their silver dancing shoon,
Ring-around-the-meadow,
When the ring's around the moon.

I don't know what I thought "shoon" meant back then; I'm sure it never occured to me that it referred to tricked-up Nikes. And, actually, I have no idea why this poem fascinated so much as a child. Stories about fairies and pixies and such usually made me want to throw up. But somehow this poem got stuck in my head and the first time I actually saw a true ring around the moon -- when I was practically middle-aged! -- I suddenly thought about this verse. That's the thing with stories and poems you first encounter in schoolbooks; you often think you've forgotten all about them and then they pop into your head unexpectedly for the rest of your life.

There was also a story in the grubby yellow book that I still think about; I almost feel like the title will come to me if I squeeze my head hard enough. It was about a little girl who liked to hang out with the town baker while he was mixing his dough; occasionally he'd give her a piece of raw dough or a cookie to eat. One day, without knowing exactly why she does it, the girl places a tiny doll in the dough. It's baked into a cookie (or maybe a loaf of bread?) and of course a customer ends up breaking a tooth. Sobbing, the girl confesses her crime to the baker, who forgives her, but never again chats with her or gives her a free cookie.

Does anyone know the name/author of this bittersweet story?

Once I started school, you'd think that I'd no longer be as enamored of reading textbooks...yet some of my best grade school moments came from old, discarded texts that were no longer used in class. Sometimes if we got done with our assignments early our teachers would let us read quietly until the bell rang. I always headed for the cabinets along the side wall which contained textbooks from an earlier era. As someone who was often (inwardly) chafed by the structured classroom environment, I loved having the opportunity to read any story I chose in these books -- and without being held back by the slowest faction of the class. If I wanted to skip to the end of the book and read a story, I could. If I liked a story so much that I wanted to read it three times in a row, I could do that as well. Is there anything better than reading something not because you "have to," but because you "want to"? Opening those old textbooks was like being at a short-story cafeteria with an overwhelming number of choices.

Every one of them was, in one way or another, a treat shop.
Posted by Peter D. Sieruta at 8:46 AM

*waves* glad to have jogged your memory! I grew up with Treat Shop too - no idea where it came from, probably a garage sale or something. I never realized it was a reading textbook either!

Once we were past the dull "Dick and Jane" stage, I remember some really great stories in my school readers. One I particularly recall was about a boy who lived in China or India who had a pet red panda. I'd love to find out what that story was called and if it was a chapter from a longer book. (As a kid I always thought red pandas were so cute and couldn't figure out why people were so ga-ga over the black-and-white ones.) We also read the original short stories of "My Friend Flicka" and "Lassie Come Home" in our school readers. Another story I remember particularly was about a pony named Skylark who became an astronaut and went into space. I found out much later, when a friend was cleaning out her books, that it was a chapter from Ponies Plot by C. Northcote Parkinson. She didn't want the book, so I have it now. :-)

Treat shop passed me by, but it excellent that you had the book, and a dad that created your very own sweet shop. Thanks for sharing those memories.

I first read The Phantom Tollbooth -- or at least "The Royal Banquet" -- as a story in my fifth grade Scott, Foresman reader. I snatched up the book when I saw it at a local bookstore a couple of years later. We have two copies in the house, my husband and I each having come into the marriage with one, and I still recommend it as something every child should read. (Although I was just thinking the other day that I don't know any children these days who would "get" the Dreadful Raauw.)

One of my grandmothers was a teacher, and every now and then she'd send me discarded readers from the 50's and 60's. I used to love those books--they were smaller than my own texts and maybe a bit simplistic but at the time I thought the references were quaint rather than racist. Every family had a stay-at-home mom, breadwinner dad, brother, sister, and cute but mischievous family dog.

My very favorite, however, was in my third grade class--she had a set of Childcraft books from the 50's (I had a 70's-80's version at home, which I still have) and it was there that I read the most wonderful stories. My favorite of the set was "People to Know," full of tales of the childhoods of Gandhi, Mozart, Elizabeth Blackwell, Clara Barton, Florence Nightengale, Betsy Ross--all as prose rather than straight-out biography. My own version of "People to Know" came much later as an 'annual,' and not part of the numbered set.

You brought back some memories for me too. There was an old copy of Adventures in Reading at our house -- I think it had belonged to my mother and I just about memorized it. A newer edition was assigned to me at some point in late grade school (late 1960's) but it had lost some of its magic by then though it was much less moralistic. One of my favorites was missing: Inside a Kid's Head which was a play. I had visions of staging it. I may have to find a copy...