Surely, She Needs a Biography

The other day I was wandering through the stacks and came across this fun volume: 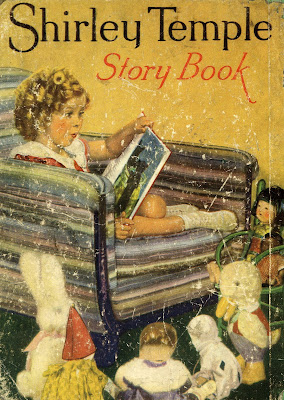 Released by Saalfield Publishing in 1935, this "authorized edition" SHIRLEY TEMPLE STORY BOOK has almost nothing to do with Shirley herself, except for the use of her picture on the cover and frontispiece; otherwise it's a fairly routine anthology of fairy tales, animal stories, and poems, mostly written by Dixie Willson and Dean O'Day. But it's a good example of how the image of this young star -- queen of the box office during the Depression era -- was merchandised to sell not just dolls, clothing, and breakfast bowls, but also children's books. Saalfield went on to publish "auhorized editions" of SHIRLEY TEMPLE'S BOOK OF FAIRY TALES; SHIRLEY TEMPLE THROUGH THE DAY; NOW I AM EIGHT (a faux-autobiography which should have been called NOW I AM NINE since Shirley's birth certificate had been altered to make her appear a year younger than she really was), SHIRLEY TEMPLE PASTIME BOOK and many others. Considering the demand for Temple memorabilia, these books can still be found for fairly reasonable prices, with moderately-used copies at under $15.

Although I'd typically grouse about a celebrity getting rich off so-so children's books, I'm willing to give Shirley a break in this regard.

Mainly because so many Shirley Temple films were based on classic children's books.

There's THE LITTLE COLONEL (1935) based on the series by Anne Fellows Johnston, THE LITTLEST REBEL (1935) from the novel by Edward Peple, CAPTAIN JANUARY (1936) from the book by Laura E. Richards, WEE WILLIE WINKIE (1936) by Rudyard Kipling, HEIDI (1936) by Johanna Spyri, REBECCA OF SUNNYBROOK FARM (1938) by Kate Douglas Wiggin, THE LITTLE PRINCESS (1938) by Frances Hodgson Burnett, and SUSANNAH OF THE MOUNTIES (1939) by Muriel Dennison. Granted, some of these adapations are pretty loose -- particularly REBECCA OF SUNNYBROOK FARM which features a truly insane scene in which Shirley, playing Rebecca as a newbie radio performer, sits down at a piano and sings "here are some of the songs I've had the pleasure of introducing to you" which include Shirley Temple's own greatest hits, such as "On the Good Ship Lollipop" and "Animal Crackers."

When the above films were released, most of their source novels were re-issued in "Shirley Temple Editions" which contained illustrations based on the movies, but also contained the complete text of the original novels -- thereby introducing these stories to a new generation of readers. I suspect that the reason some of these books are still known today is because the Temple movies -- on TV, on video and DVD -- have kept the titles somwhat current in pop culture. 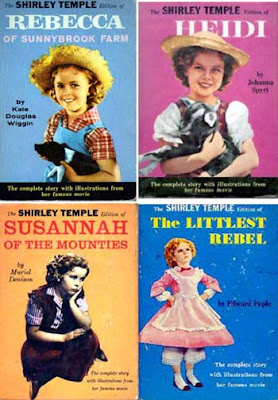 And that's one of the intriguing things about Shirley Temple. Although her reign as box office champ ended when she became a teenager, the public never forgot her. Well into the 1940s, Whitman issued two dime store novels featuring Ms. Temple: 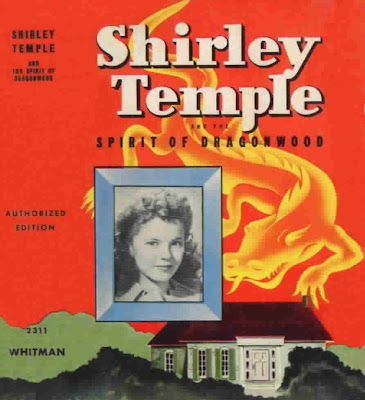 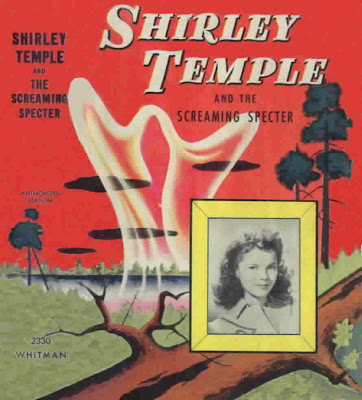 which are even today available from Kessinger Publishing, a company "dedicated toward publishing and digitally preserving important literature for future generations." Are these Shirley Temple books "important literature"? No, but they're obviously well-remembered and well-loved enough to merit re-publication in the twenty-first century.

Although I grew up decades after Shirley Temple's heyday, her films were very much a part of my childhood. One local television station ran her movies, in rotation, every Sunday morning at 11:30 AM from the time I was a little kid until I was out of high school. As old as these films were, they were definitely part of the cultural zeitgeist throughout the sixties and seventies. I'm not sure that they're shown on TV much these days, but I have friends whose children still watch HEIDI and POOR LITTLE RICH GIRL and CURLYTOP today on video.

And Shirley still has a presence in children's books. Tomie DePaola idolizes her in his "Fairmount Avenue" Books. The protagonist of IN THE YEAR OF THE BOAR AND JACKIE ROBINSON is named Shirley Temple Wong. Shirley's mentioned in a number of recent Newbery Honor Books including A LONG WAY FROM CHICAGO by Richard Peck, A CORNER OF THE UNIVERSE by Ann M. Martin and LILY'S CROSSING by Patricia Reilly Giff. Cool YA books such as YOU DON'T KNOW ME (David Klass) and CUT (Patricia McCormick) even make reference to her.

So here's my question: if most kids know about Shirley Temple, how come no one has ever written a good biography about her for children? Scrounging around on the internet and in library catalogs, I can only find one volume currently in print -- a 32-page formula bio called SHIRLEY TEMPLE : CHILD STAR by John Bankston. Going back in time, I see a Yearling paperback biography, as well as a couple books (including one by James Haskins) which focus on her adult career as a public servant and ambassador.

Meanwhile, Amazon.com lists nearly twenty children's biographies for Miley Cyrus, including: MAD FOR MILEY : AN UNAUTHORIZED BIOGRAPHTY by Lauren Alexander, MILEY CYRUS : THIS IS HER LIFE by Brittany Kent, MILEY CYRUS UNAUTHORIZED by Jackie Robb, and many, many more.