And They All Went Home?

Some rhymes have reasons. Many old English nursery rhymes are said to contain coded references to historical figures and events. Take this powerful verse about the making of a rifle:

Some think that “John Ball” refers to a fourteenth-century priest who participated in the Peasants’ Revolt of 1381. Whether or not this rhyme actually had historical significance, I’m fascinated by the fact that Ed and Barbara Emberley later gave it contemporary significance for readers in the sixties. 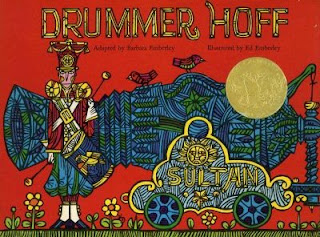 In 1967’s DRUMMER HOFF, Barbara Emberley adapted this traditional rhyme, but changed the focus from a rifle to a cannon:

Utilizing wood cuts and only three colors of ink (red, yellow, and blue -- which through the use of “overprinting” -- would yield thirteen different colors on the printed page), Ed Emberley created radiant, complex images that, in the parlance of the era, might have been called “mod” or even “psychodelic.” Mr. Emberley would later state, “The book’s main theme is a simple one -- a group of happy warriors build a cannon that goes ‘KAHBAHBLOOM.’”

But he also acknowledged that “there is more to find if you ‘read’ the pictures.” He noted that the illustrations “show that men can fall in love with war and <...> go to meet it dressed as if to meet their sweethearts” -- as is evident in this dandified character: 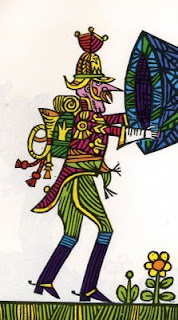 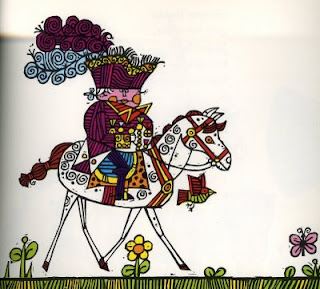 Although the artist doesn’t mention it, I’d be remiss if I didn’t point out the phallic imagery in these men-at-war illustrations. As is evident in this picture: 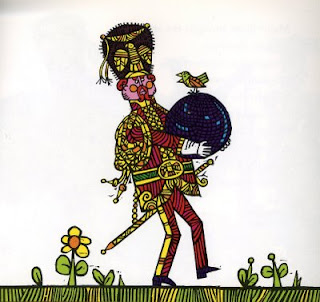 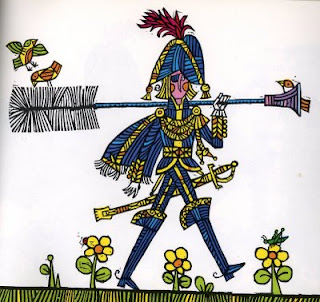 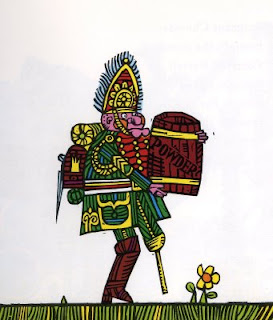 Of course many children will not question this soldier’s leg as they delight in the cumulative rhymes that lead up to the double-page spread in which Drummer Hoff fires off the cannon and everything goes red. But they probably will wonder what happened to the “happy warriors"...who do not appear on the final page of the book.

A few years ago, a group of children wrote Mr. Emberley and said, “We enjoyed reading your books and we want to know what happened after Drummer Hoff fired it off?”

He responded, “How smart you are to think about what happened to Drummer Hoff and all the other soldiers after he ‘fired it off.’ We left it to the reader's imagination to figure out what happened next. Some people thought they all blew up!!!!!! Maybe that's true but I know what I imagine, Here are the words I was going to put on the last page: “and they all went home” — maybe to supper...maybe to bed...maybe they all went to the beach!!!”

Maybe all the soldiers did go home. But when I look at the final page of the book, in which the abandoned cannon has been appropriated by flowers and nature, I find myself humming the Pete Seeger song that asks: 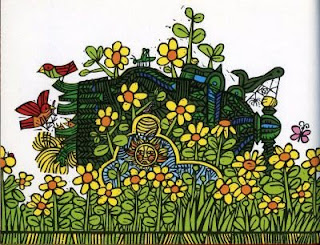 I suspect that different audiences will take different things from DRUMMER HOFF. For many kids, it probably does read as a story of “happy warriors” leading up to that big, shout-it-out-loud “KAHBAHBLOOM.” But many adults may view it as an antiwar tale, leading to a quiet moment of reflection.

DRUMMER HOFF won the 1968 Caldecott Medal -- a very daring selection for its era. The Caldecott rules clearly state that "the award is not for didactic intent” but there is also a lot of wiggle-room in these criteria: “excellence of pictorial interpretation of story, theme, or concept; of appropriateness of style of illustration to the story, theme or concept; of delineation of plot, theme, characters, setting mood or information through the pictures.”

Clearly the book deserved the award for its vivid and innovative illustrations alone...but, whether intended by the committee or not, there is a special significance in the fact that DRUMMER HOFF won the Caldecott in 1968 -- a year in which 16,592 American soldiers did not come home from Vietnam.
Posted by Peter D. Sieruta at 2:30 AM

I'm working on a documentary about Ed and his work and had an opportunity to talk to him about 'Drummer Hoff'. It was interesting to learn that he originally thought the book was too abstract for kids but, of course, it proved to be extremely popular (for all the reasons you mention).

I also had the chance to see the original woodcuts. They are truly phenomenal.

For more info on the film, check out: http://swidinst.org/make-a-world-film/

this was my all time favorite book to check out at the library growing up.just looking at thes pictures bring back so many good memories !!!!

I never picked up this book as a child. But 30 years after it was written, my little boy loved it & insisted I read it to him every night. Now he is learning to be a drummer & Drummer Hoff is one of MY favorites!