Book Review : WHEN YOU REACH ME

Sometimes you have to read them twice.

I first heard about Rebecca Stead’s WHEN YOU REACH ME a few months ago, when two unimpeachable sources in the children’s book world told me this novel was really special. I was fortunate enough to acquire an ARC (advance reading copy) of the book

and, when I finished it, my head was whirling: time travel...a homeless man who sleeps beneath a mailbox...secret messages...and the $20,000 Pyramid? All these disparate elements fit together as neatly as strands in a spiderweb, but I had the feeling that if I read the book a second time, I’d find some holes in the plot and the fragile spiderweb would dissolve under closer examination. Well, I’ve now re-read the book after several months and can report that the plot is so tightly-knit that it easily withstands the test of time. And time is one of the themes of this fully-realized novel. The story concerns Miranda, whose sixth-grade year is altered when her best bud and neighbor, a boy named Sal, suddenly breaks off their friendship. Shortly thereafter, she begins receiving a series of anonymous notes (“I am coming to save your friend’s life, and my own”) that hint at mysteries just out of reach. Although this book might technically be labeled “science fiction,” its New York City setting, circa 1978, keeps the story firmly grounded in the real world. Stead never lets her clever central premise overwhelm the novel, instead presenting a well-rounded story of Miranda also facing the everyday mysteries of growing up -- making new friends, finding a job, and learning that people aren’t always what they seem. In the end it’s astonishing how every element of the plot -- including allusions to Miranda’s favorite book, A WRINKLE IN TIME, and Mom’s appearance on a TV game show -- comes together to reinforce and amplify the mystery at the core of this fascinating novel. Rebecca Stead’s previous book, FIRST LIGHT, marked the arrival of an original talent; WHEN YOU REACH ME confirms it.

Now I need to read the book a third time -- not to look for holes in the plot, but just for the sheer pleasure of the experience. 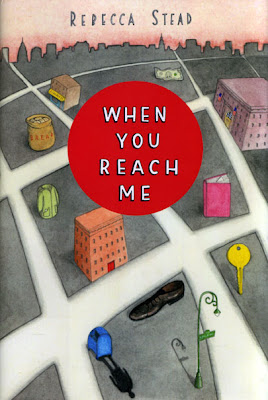 WHEN YOU REACH ME by Rebecca Stead. Published by Wendy Lamb Books/Random House, 2008.

Why the book is collectable: It’s already picked up a peck of starred reviews and is being mentioned in national magazines. A likely award contender. Has the feel of a future classic.

Difficulty in finding first editions: Though just published this week, the book is already in later printings. At this point, you should still be able to track down a first, but as the months goes on, it will be harder and harder...unless you're a time traveler.
Posted by Peter D. Sieruta at 12:20 AM