A Banquet, Not a Brunch

I just read the most fascinating thing.

And to answer a sharp-eyed questioner, yes, there are a couple of changes in the latest printing of The Graveyard Book; I fixed an error in astronomy I'd made, and a misspelled foreign word, and fixed some paragraphs in the acknowledgments that were truncated in the original US edition.

I was amazed to see that even a brilliant and respected writer makes mistakes...and sometimes they aren’t even caught and corrected until the bajillionth printing of his book.

What makes his message especially fun is that he wrote it from Chicago, where he was attending the American Library Association Convention to pick up his 2009 Newbery Medal for THE GRAVEYARD BOOK -- errors, misspellings, and all!

I’m kidding, of course. THE GRAVEYARD BOOK is one of the most acclaimed Newbery winners in years -- hailed by critics and hugely popular with young readers.

Tonight’s the night Mr. Gaiman delivers his acceptance speech at a gala banquet in Chicago. Joining him at the podium will be Beth Krommes, who received the Caldecott for illustrating Susan Marie Swanson’s THE HOUSE IN THE NIGHT, and Ashley Bryan, who has won the Laura Ingalls Wilder Award for his entire body of work.

Today’s blog celebrates these creators and talks a bit about ALA banquets past and present.


SOME TRIVIA ABOUT THIS YEAR’S N/C WINNERS

CLASSICS ILLUSTRATED: Both the Newbery and Caldecott books were inspired by classic works of literature. Over two decades ago, Neil Gaiman watched his young son playing in a graveyard and got the idea of writing a story similar to Rudyard Kipling’s THE JUNGLE BOOK, but set within a cemetery. The title of Gaiman’s volume is a nod to Kipling’s title as well. Author Susan Marie Swanson stated that a classic nursery rhyme inspired the pattern of her HOUSE IN THE NIGHT text. Here is the original rhyme:

Flowers in a basket;
Basket on the bed;
Bed in the chamber;
Chamber in the house;
House in the weedy yard;
Yard in the winding lane;
Lane in the broad street;
Street in the high town;
Town in the city;
City in the kingdom--
This is the key to the kingdom.
Of the kingdom this is the key. 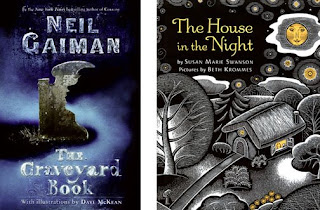 THE REALLY BIG GRAVEYARD BOOK: I was surprised to discover that this year’s Newbery winner is the fifth longest Newbery winner ever. The champ remains the very first winner, THE STORY OF MANKIND by Hendrik Van Loon, which clocks in at 548 pages. The following year’s honoree, THE VOYAGES OF DR. DOLITTLE by Hugh Lofting is 364. Lynn Rae Perkins’ CRISS CROSS is 337 pages and Harold Keith’s RIFLES FOR WATIE is 332. And THE GRAVEYARD BOOK comes in fifth, at 327 pages.

AND A REALLY BIG BESTSELLER: By the time THE GRAVEYARD BOOK won the Newbery in January, it had already sold 71,000 copies retail. Since then it has sold tens of thousands more. Compare that to last year’s winner, GOOD MASTERS! SWEET LADIES! by Amy Laura Schlitz, which has only sold a little over 30,000 retail copies in two years.

BLACK AND WHITE: Because Ms. Krommes’ technique of creating black-and-white scratchboard pictures and later adding color is so time-consuming, her editor promised to someday assign her a manuscript that only required black-and-white illustrations. THE HOUSE IN THE NIGHT was that story, though it did require some additional color -- yellow -- to illuminate the dark night. Although full-color artwork has been standard in picture books for many decades, it’s interesting to note that three of the five most recent Caldecott winners (HOUSE IN THE NIGHT; THE INVENTION OF HUGO CABRET by Brian Selznick, and KITTEN’S FIRST FULL MOON by Kevin Henkes) have essentially been black-and-white volumes.

ANOTHER ILLUSTRATION ODDITY: Although illustrations in middle-grade books seem to have fallen out of favor in recent years, four out of the five most recent Newbery titles (THE GRAVEYARD BOOK; GOOD MASTERS! SWEET LADIES!; THE HIGHER POWER OF LUCKY; CRISS CROSS, and THE TALE OF DESPEREAUX) contain illustrations...but you must then go back fifteen years, to 1989 (JOYFUL NOISE by Paul Fleischman) to find an illustrated book on the Newbery roster.

A GOOD TITLE: It seems that THE HOUSE IN THE NIGHT has an especially winning title. No less than seven previous Caldecott books have “house” in the title and five have the word “night”:

FROM ACROSS THE POND: Neil Gaiman, like previous winners Hugh Lofting and Susan Cooper, was born in England but was eligible for the award because he lives primarily in the United States. (He is also a naturalized citizen of this country.)


NOT FORGETTING THE WILDER WINNER

Tonight’s banquet will also honor Ashley Bryan for his complete body of work as an illustrator, writer, and folklorist. 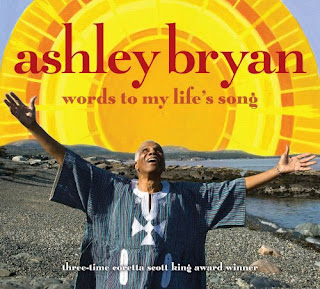 Born in Harlem, he began painting as a child, served in the military during World War II (storing drawing paper in his helmet), and entered the field of children’s books in 1967, illustrating MOON, FOR WHAT DO YOU WANT? by Rabindranath Tagore.

A creator of great talent and integrity, Mr. Bryan will be receiving the Laura Ingalls Wilder Award on the night before his 86th birthday.

I can't say for sure, as I’ve never been. Those who have attended past banquets have described them, by turns, as “thrilling,” “inspiring,” “thought-provoking,” “fun,” and “loooong.”

This year’s event costs $94 and includes dinner, though the “cash bar” is priced separately.

I was hoping to track down a sample menu to share, but couldn’t find that info. The closest I could come was a report from Fuse #8, who attended last year’s banquet, and said it featured “salmon, wine, bread, salad, and a chocolately mousse in truffle-like shell.”

Everyone attending gets a copy of the program and a tape of the speech. I have a number of these in my “Newbery Collection.” Some have been given to me by friends; others I’ve purchased. Here is a program from the 1977 awards that I bought. I especially like it because of the colorful illustration (by that year’s Caldecott winners Leo and Diane Dillon), because it was signed by Margaret Musgrove, who wrote ASHANTI TO ZULU, and because that year’s convention was held in my hometown of Detroit: 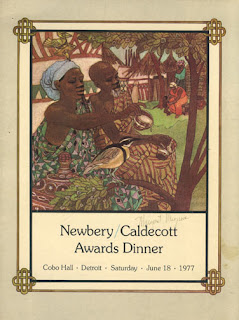 It is difficult to track down older programs like this and they usually cost about $75-125. More recent programs can be found for $25-50.

The tapes are nice too: 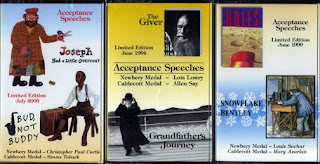 On his blog, Neil Gaiman said that the tape is played if the winner cannot speak for some reason, but I don’t know if that would actually happen. I’m aware of at least one case when an author was not available to speak -- Robert C. O’Brien in 1972 -- and his editor ended up reading the speech in his place.

I’ve heard there have been a couple occasions when a tape might have been preferable to the live performance, cases where creators -- either overly thrilled by their big moment in the spotlight or handicapped by one too many visits to that cash bar -- have begun ad-libbing their speeches before the crowd....

I must say that I’ve dreamed away a number of hours imagining my own Newbery speech. Of course I’d probably be too shy and flustered to actually give the speech in front of a huge crowd and would likely run off stage in full-panic mode about midway through it. (At which point someone could finally yell “Queue the tape!”) But still, it’s nice to imagine being rewarded for one’s work, and standing before a crowd of appreciative conventioneers hanging onto every precious word of wisdom. I can just imagine their eager and interested faces! (Click on the image to enlarge it and read the “thought bubbles.”) 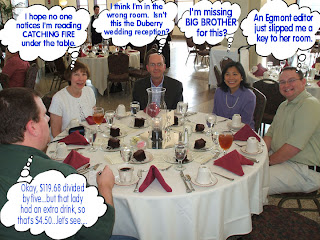 Earlier in this blog, I made a typo. (See, Neil, you’re not the only one.) I was writing “2009 Newbery winner” and accidentally typed “2099 Newbery winner” instead. It gave me pause, realizing there will someday be Newbery winners I won’t know about...Newbery winners I’ll never get to read. But then I thought about how neat it is to have this kind of continuity: awards given year after year...decades before I was born, and then decades after I’m gone. Yes, there are times we don’t like a particular winning book, times we think they got it all wrong -- but even that kind of situation gets us talking about books, and makes us appreciate the good ones even more. I love to see great books recognized and rewarded and hope that this annual tradition really will continue through 2099 and beyond.

Thanks for stopping by.
Posted by Peter D. Sieruta at 4:09 PM

Just for the record, Peter, this year's banquet featured a juicy filet mignon and a piece of whitefish, though everyone else at my table (the SLJ table) opted for the alternative vegetarian plate. There is a palpable excitement in that huge room. Both Newbery and Caldecott speeches were well-delivered and interesting, but Ashley Bryan was the star of the evening. He went off-script several times - not for the reasons you cite - simply because his passion for poetry and language compelled him to involve everyone in the room in call-and-response poems that punctuated his joyful acceptance of the award. Ashley Bryan is a vital force of nature. Experiencing his speech in person is invigorating to the max, even after too much steak and chocolate-thingy dessert.

This was my second banquet and everyone looked as smashingly beautiful as they did the year that Yep, Kadohata and Henkes won :) I REALLY enjoyed Ashley Bryan's speech, and how he got the audience involved in his speech. I also very much enjoyed the chocolate waffly ball that accompanied the less-delicious chocolate cake :)

Thank you for sharing your thoughts!

Those thought bubbles are hilarious!

The CILIP Carnegie and Kate Greenaway awards were announced June 25

Great blog. I hope you get to attend some day. Interestingly I almost never remember what I ate (I get the vegetarian option). I do recall some of the worst speeches but also some of the best. Part of the fun of the N/C dinner is seeing so many wonderful people in one room. As for the recordings, it is tradition to rip them open to check out the length of the speeches. That helps one know whether to head to the bathroom early and to get another drink on the way back.