Hey, I Can Read French!

An eleven or twelve year old boy enters the library and says he needs to read a Newbery book for school.

The librarian says, "This is the current winner."

The boy eyes the cover dubiously. "What's it about?"

"It's about a plucky little doll with a hickory nut for a head having adventures with her many animal friends."

The librarian then holds up another volume. "How about one of this year's Newbery runners-up? It's about a boy helping his uncle build an airplane and trying to catch Nazi spies hiding in the mountains--"

As the boy stands in line to check out the book, he thumbs through the pages and sees: 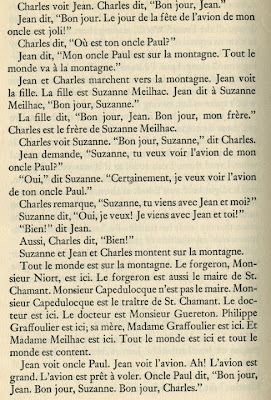 "You will," says the librarian, stamping the date due slip. "By the time you finish the book, you will...."

This type of scenario likely occurred back in 1947 when THE AVION MY UNCLE FLEW was named a Newbery runner-up. (The term "runner-up" was later changed to Honor Book.) Although one of the terms of the Newbery Award states that the book must be "published in English," this offbeat novel by Cyrus Fisher found a way around that rule while simultaneously telling a super-charged tale with lots of kid-appeal.

The story concerns a Wyoming kid who is sent to spend the summer with his uncle in the small village of St. Chamant, France. Johnny is recovering from a serious leg injury and his parents have promised him a new bicycle if he regains the ability to walk and learns the French language. Although he initially resents being separated from his folks, Johnny quickly becomes fond of his "oncle Paul," who is just back from the Second World War and determined to build a new kind of "avion," or airborne glider. Within days John -- now called by the French name "Jean" -- is picking up the language and tossing aside his crutches as he investigates the mystery of a Nazi hiding in the mountains that surround St. Chamant.

We tend to think of children's books from earlier eras as being more conservative and "safer" than modern titles, but I'm not convinced that is true. When published in 1946, just one year after the war ended, THE AVION MY UNCLE FLEW must have seemed startlingly contemporary, considering its MEIN KAMPF-reading villian. And there is real danger in this story. People get killed. A Nazi collaborator is hauled off at the end of the book to "be punished, perhaps beheaded." Although those aspects of the story are serious, Johnny's first-person narration is casual, occasionally humorous, and almost always exciting. The scene in which he escapes captors by flying his uncle's avion off the side of the mountain and over St. Chamant is so thrilling that I can't imagine why this book was never adapted as a motion picture.

Author Cyrus Fisher may not be familiar to many readers. His real name was Darwin L. Teilhet (1904-1964), and he was best known for a series of adult mysteries he wrote under that name, often in partnership with his wife, featuring a detective named Baron Franz Maximilian Karagoz und von Kaz. He also used the pseudonyms William H. Fielding and Theo Durrant. It's too bad that he wrote just a handful of books for children because, from what I've seen, he not only produced exciting and memorable books, but he often employed unusual "twists" in telling his tales. Writing about THE AVION MY UNCLE FLEW, critic Howard Pease said, "over and above the fascinating story, it contains an element new to children's fiction. You will probably say, as I did, 'Why didn't someone think of this before?' Well, no one did -- until now."

Mr. Pease is referring to the page produced above, all printed in French.

In writing the novel, the author gradually and skillfully includes French words throughout the text. At first the words are obvious and unexplained, as when Johnny arrives in France and goes to visit a local "parc." But as the story goes on, more and more phrases are incorporated into the narrative and are either understood through context or unobtrusively explained by Johnny and other characters ("Madame Graffoulier answered, very slowly, 'Ton oncle est avec le forgeron.' I knew every word except that 'avec' and it slipped in like the last piece of a jigsaw puzzle. The only thing could mean was 'with.' My uncle was with the blacksmith.") By the last half of the novel, the pages are liberally dotted with French words and phrases and even the later chapter titles are in French. THE AVION MY UNCLE FLEW concludes with four pages written entirely in French, a victory for Johnny -- I mean Jean -- who has finally mastered the language well enough to write it, but also a huge victory for the reader who, even if he or she had no knowledge of French on page one, has now mastered the language well enough to read it, having learned all those words just from reading the novel!

Back in 1946, Howard Pease said this language-learning technique was new to children's fiction. And in the fifty-plus years since AVION was published, I don't know any other novels that have employed it again...do you? It's one of the factors that made THE AVION MY UNCLE FLEW unique back when it was named a Newbery "runner-up" and keeps it fresh and vital for anyone lucky enough to read it today.

That imaginary kid who checked out the book earlier in this blog ("I don't know how to read French!") was no doubt shocked when he got to the end of the volume and actually could read those pages.

I know I was amazed when I read them just now.

I can read French? 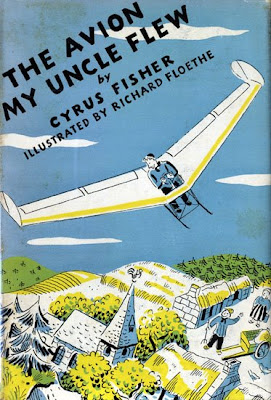 Why the book is collectable: Because it's a Newbery Honor Book. And because of its unusual method of "teaching" French.

How to identify first editions: $2.50 price on dustjacket. There is no date on the title page and the copyright page simply states "COPYRIGHT, 1946, BY DARWIN L. TEILHET. For the longest time I thought there was no other way to identify a first, but recently noted that on the very last page of the book, after the words "LA FIN," there is a number one (1) enclosed in parentheses. When the book went to a second printing, that number changed to a two (2) and I'm assuming it continued to be raised with subsequent printings. So, if seeking a first edition, make sure you copy has that (1) on the last page.

Difficulty in finding first editions: Copies are out there, starting at around $50 and up.
Posted by Peter D. Sieruta at 9:55 AM

I saw a copy of this book last night in my favorite secondhand bookstore. It was the paperback published by Scholastic. I immediately remembered this blogpost, so I bought it. Hopefully I'll have learned some French by the time I've finished it! Thanks, Peter, and more power!