They Killed Him with Kindness. Literally.

Trying to find the stories behind old books can be frustrating.

In today’s world, authors are as close as a click of a mouse. They blog and vlog and Twitter. Some even chart their day-by-day writing progress on the web. But this is a recent development. Authors used to work in near-isolation and the stories of how and why they created their books were often never shared. If you try to track down that information today, you may only find a vague reference in an article...a sentence from a speech...a line from an interview....

Sometimes you only uncover half of a story.

But sometimes half a story is all you need to know.

Joseph Krumgold burst into the field of children’s books with ...AND NOW MIGUEL. This story of a New Mexico boy growing up in a family of sheep herders won the 1954 Newbery Medal. At the time Mr. Krumgold accepted the award he was already working on ONION JOHN -- probably never dreaming that his second effort would also win the Newbery in 1960, making him the first author to ever win that award twice.

These days ONION JOHN is not considered one of the great Newbery choices -- especially since two of that year’s Honor Books, THE GAMMAGE CUP by Carol Kendall and MY SIDE OF THE MOUNTAIN by Jean Craighead George -- have gone on to become classics. 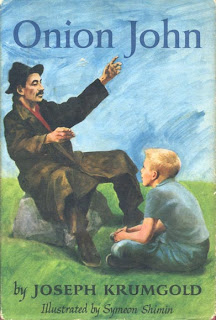 But I loved ONION JOHN as a kid. Today, however, I can see some of its flaws; I am not the first to note that its narrator, twelve-year-old Andy Rusch, serves more as an observer than a participant -- and that it’s actually Andy’s father who changes and grows during the course of the novel. Still, Joseph Krumgold gets a lot right. He knows how boys think and feel and act and his themes of father-son conflict, identity, communication, self-determination, and “good intentions gone wrong” are strong and timeless. The novel is set in the small All-American town of Serenity, New Jersey, where young Andy's father runs the local hardware store. Mr. Rusch has big plans for his son's future (MIT, space travel) while Andy would be satisfied to just take over the hardware store someday. Andy becomes friends with Onion John, an eccentric European immigrant "well along in years" who believes in superstitions and lives in a run-down hut on Hessian Hill. When Mr. Rusch visits this hovel, he decides that his Rotary Club will take on Onion John as their next "project," building him a new house so he can "live like the rest of us." Serenity proclaims "Onion John Day" and, quicker than an episode of television's EXTREME MAKEOVER, the townspeople build and furnish a house for this loner. The very next day, Onion John -- not understanding modern technology -- fills his stove with newspaper to light it, turns on the switch, and ends up burning the house down. When the local citizens decide to rebuild this home, Onion John leaves town rather than accept a life of conformity. He just wants to be left alone.

Critic Carolyn Horovitz could not fully accept the characterization of Onion John, finding him "a personification of an abstraction." With his superstitions, spellcasting, and nonchalant attitude toward work, he does appear to be the archetypal "free spirit" of fiction.

That's why I was surprised to learn that Onion John was a real person and that most of the events in the book actually happened.

In fact, Joseph Krumgold's original manuscript referred to the town by its real name: Belvidere, New Jersey. Amazingly, Krumgold also called all the characters by their real-life names! It wasn't until his publisher expressed a concern about lawsuits that Belvidere became "Serenity" and the names of the characters were fictionalized.

Much of the plot is true as well. Apparently the town of Belvidere really did adopt their local eccentric and he was "treated with loving kindness in a way that [distorted] his values. He [was] destroyed by the love of this town."

You see, in real life Onion John did not escape injury when his new house caught on fire. Instead, his misuse of the electric stove caused an explosion that cost him his life.

The people of Belvidere took up a collection to bury him.

On Christmas Day in the morning, I got a phone call from a very fine gentleman who runs the furniture store. He said, "I've been reading that book you wrote. We never bought him a headstone." I thought, The story starts all over. We're going to raise enough money and buy him a headstone, and we're going to have an "Onion John Day." By God, that's what they did as soon as the frost was off the ground! I was an honored guest at the ceremony....

When I read that anecdote, I immediately set about doing more research. Who was this "Onion John" that Joseph Krumgold wrote about? Are there stories in old New Jersey newspapers about the Rotary Club building his house? Are there stories about his accidental death? Was the headstone ceremony covered in the media? I began looking for interviews with the author and then scouring the internet for details. The only thing I found was a brief comment from a man whose mother and aunt knew the real Onion John and once showed him the remains of Onion John's ill-fated house. I pictured myself someday taking a trip to Belvidere, New Jersey and looking for those remains myself. I pictured myself wandering through the local cemetery and coming across a fancy tombstone, perhaps ornamented with a sculpted onion on top, commemorating "John Claiblin, AKA Onion John." I wondered if the headstone would contain any words about the man or the role that the townspeople -- with only the best of intentions -- played in his death.

But then I began thinking...if Joseph Krumgold changed the names of the people involved in this story, it's quite possible that "Onion John" is a made-up name as well. Perhaps he was really called "Onion Jack" or "Onion Bill." Maybe it wasn't an onion at all. Maybe he was known as "Pumpkin Paul" or "Lettuce Tom," in which case I could wander Belvidere's cemeteries for days, walking right past headstones with carved pumpkins or heads of lettuce on top.

This is why I say that finding the stories behind old books is frustrating. If the book ONION JOHN was published today, we'd most likely know a lot about the true story that inspired it. But since it was published back in 1959, all we really know today is that Onion John -- if that was his real name -- actually lived in a place called Belvidere, New Jersey and that Joseph Krumgold memorialized him in a book. We only know half the story.

But maybe that's just as well. The character in the book just wanted to be left alone by do-gooders and nosy-parkers and concerned citizens. And I suspect his real-life counterpart wouldn't want a children's book blogger rushing into Belvidere, unspooling microfilms of old newspapers and tramping through muddy cemeteries looking for ornate onions and polished pewter pumpkins affixed to tombstones. He's probably buried under a modest stone that simply says "Rest in Peace." And I suspect that's the way he would have wanted it.

Bound in red cloth with black printing on spine.

The dustjacket has a price of $3.00 on the front flap.

The backpanel of the dustjacket contains reviews of ...AND NOW MIGUEL.

The book is not as difficult to find as many other Newbery winners, perhaps it had a larger-than-normal print-run due to the success of ...AND NOW MIGUEL. It is also not a hugely-popular novel. Nice first editions can often be found for as low as $50 to $75.
Posted by Peter D. Sieruta at 9:58 AM

Thank you thank you for the trip down memory lane. I adored Onion John as a kid and haven't thought of it in so many years!

I actually live in Belvidere NJ. I knew of references to Onion John but never knew he actually existed. I am going to do additional research on him and seek out the headstone in one of the two cemetary's in town

Cool Post! Very informative dude. I saw this site while browsing and think it may be relevant http://www.qualitymarkers.com . Keep up the good work!

My grandfather used to work alongside Onion John in the fields as a young man. He and my grandmother handed me the book as a child and told me his memories about this man. Thank you for writing this blog article and bringing back a wonderful childhood memory.