Are you wearing green today?

No, I don’t go through life viewing the world like a black-and-white movie the way Jonas does in Lois Lowry’s THE GIVER. I can see every color, but occasionally -- depending on the lighting and the particular shade of color involved -- I have trouble with reds and greens. Especially greens. This can be a problem when you’re involved with children’s books. Look at all the greens I tangle with on a daily basis:

There’s Mr. Toad and the Green Knight and Shrek.

There’s John Green and Bette Greene and Eloise Greenfield and the publisher Greenwillow. 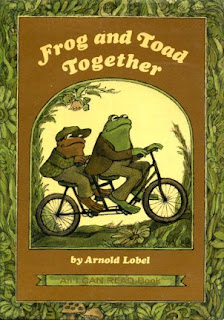 DAYS WITH FROG AND TOAD (1979.) Now comes word that a new, never-before-published volume, THE FROGS AND TOADS ALL SANG, is slated for publication this spring. These books were inspired by a summer vacation in Vermont during which Mr. Lobel spent much of his time observing the frogs and toads at a nearby pond -- amphibians which sometimes found their way into the house as “pets” for his children. Written in simple “I Can Read” style, these wise and funny tales about two best friends create, in the words of critic George Shannon, “a world of friendship and comedy, obsession and gentleness, foolishness and thoughtfulness, in which story, song, and laughter were the greatest gifts.” Rarely has their been such a seamless combination of prose and pictures, a synergy which resulted in one volume -- FROG AND TOAD ARE FRIENDS -- receiving a Newbery Honor for its distinguished writing, while another -- FROG AND TOAD TOGETHER -- received a Caldecott Honor for its excellence in illustration.

Now about those illustrations...

Well, of course Frog and Toad are green. Frogs and toads are, by nature, green. But everything else pictured in these books is green as well: the walls of their houses, the books they read, the clothes they wear, even the cookies they eat -- green, green, green, green!

Yet somehow Lobel makes it all work, using a wide spectrum of shades, tints, and hues to create an amazingly variegated pastoral setting.

Arnold Lobel was only fifty-four years old when he died in 1987. At his memorial service, his friend and colleague James Marshall stated “Arnold had one of the most exuberant and original palettes in books.”

He added, “There is a particular green. If God created one truly hideous color, it is this green, somewhere between bile and phlegm. Most artists wouldn’t touch it. But Arnold used this green all the time - and he made it beautiful, amusing, interesting.”

I’ve just spent the past hour looking at some of the Frog and Toad books, trying to find the “particular green” Mr. Marshall is referencing. It may have been “hideous” or bilious or phlegmatic in the paintbox, but every shade of green on the page really is beautiful, amusing, and interesting.

I have to admit that my eyes occasionally strayed to the text, finding equal enjoyment in the gently-comic tales of Frog and Toad planting seeds, taking long walks, flying kites, and dreaming. These are the kind of stories that never grow old; future generations will enjoy them just as much as kids do today. They are classic works of children’s literature that have become a permanent part of our culture. I may not be able to identify every shade of color Mr. Lobel used in the illustrations, but I can tell you that it’s indubitably and indisputably an indelible green.
Posted by Peter D. Sieruta at 2:23 AM

Oh I do love Frog and Toad.

My friend's agent told her that green books don't sell. What do we think about that? (that is we as in you, not as in royal we which would be me).

Aww, Frog and Toad. I wonder if they are part of why I love all the ugly greens.

Oh I LOVED the Frog and Toad books as a kid. It was one of the first things I learned how to read!