Her Mother Once Sat on Hans Christian Andersen's Knee

Looking for a first edition of Madeleine L'Engle's A WRINKLE IN TIME?

Published in 1962, the book's small first printing mostly ended up in schools and libraries. A few non-library copies still exist, of course, but on the rare occasion that one comes on the market, it usually sells for thousands of dollars. That's why I was shocked when an old book-collecting friend told me that he'd purchased a first edition for only $45.

"How in the world did you swing that?" I gasped.

It happened about fifteen years ago, when the internet was still relatively new. One day while surfing the web, this man -- a teacher who didn't have a lot of money to support his habit -- happened upon a message board devoted to the subject of book collecting. I'm not sure whether it was hubris or naïveté that motivated him to post a message stating that A WRINKLE IN TIME was his favorite childhood book and asking if anyone knew where he could buy an "inexpensive first edition"...a question somewhat akin to asking if anyone had the Hope diamond for sale -- cheap! Instead of being laughed right off the internet, he got a response from a bookseller offering the book for only $45! When it arrived, he was surprised to discover that it was also signed by the author.

A SIGNED COPY of the Holy Grail of children's books...for only $45? I was stunned.

He went on to tell me that he thought the book was once owned by Ursula LeGuin, as Madeleine L'Engle had inscribed it to "Miss LeG."

Yes, that would have been pretty amazing. But the truth was even more amazing. Knowing a little bit about theatre, I was able to tell him that "Miss LeG" was the nickname of the great stage actress Eva Le Gallienne. Madeleine L'Engle had started her career as an actress and worked with Eva Le Gallienne on stage; when A WRINKLE IN TIME was published, a quote from her old friend "Miss LeG" appeared on the back cover: "I read A WRINKLE IN TIME with great interest and found myself completely absorbed in it, but I was particularly impressed by the way it continued to haunt me. I couldn't get it out of my mind -- it has a curious magic, it casts a spell over one. It is a most exciting and original work -- but, apart from the actual story, it has things to say that are immensely valuable, stimulating and provocative."

So not only did this book collector stumble upon a first edition of A WRINKLE IN TIME (rare!), it was also inscribed (rarer still!!) to someone who was quoted on the back of the book (that rarest thing of all -- an association copy!!!)

Nowadays the name Eva Le Gallienne is not well-known. She devoted her career to that most ephemeral, yet indelible, of the arts: live theatre. (Ephemeral because a stage performance exists only in the present moment; indelible because a great performance burns in the memory forever.) Though she appeared on stage for nearly seventy years, very little of Miss LeG's work was recorded for posterity. She did a few live dramas during "television's golden age", got an Oscar nomination at age 82 for one of her rare film roles (in RESURRECTION), and did an episode of ST. ELSEWHERE a few years after that.

One of the things I find most fascinating about Eva Le Gallienne, however, is her lifelong connection with children's books. In retrospect, it almost seems predestined. When Eva's mother was growing up in Denmark, the elderly Hans Christian Andersen visited her school. Noticing that Eva's mother was the smallest child in the class, he placed her on his knee and shared sips of barley water with her while he spent an hour reciting fairy 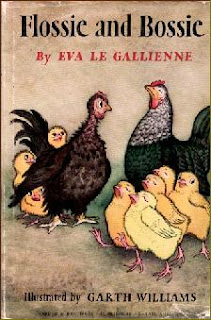 tales to the room full of students. Eva would later say, "Brief as it was, this meeting with Hans Christian Andersen, and the sense of comforting closeness that seems to have been a part of it, gave my mother, as she grew older, a feeling of having known the man; and this feeling she has passed down to me." Although Ms. LeG's stage work ranged from performing in Pulitzer prize winning plays (ALISON'S HOUSE) to the classics (ROMEO AND JULIET; THE CHERRY ORCHARD), she also starred in and directed adaptations of two children's books, PETER PAN and ALICE IN WONDERLAND. She also tried her hand at writing for children with an animal tale called FLOSSIE AND BOSSIE in 1949 and a collection of Andersen stories, SEVEN TALES, in 1959. 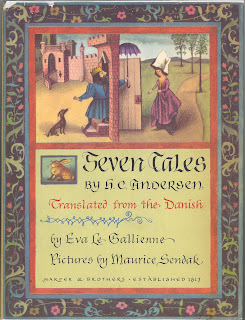 It's important to remember that this was well before the trend of "celebrity children's book authors." It's quite clear that Miss LeG's books were written not because she had a famous name, but because she had something she wanted to SAY. Ursula Norstrom published both of these books and the fact that she used two of her own favorite artists -- Garth Williams and Maurice Sendak -- to illustrate them shows how much she regarded the author's writing. Decades later, Miss LeG read Barbara Wersba's outstanding 1968 young adult novel, THE DREAM WATCHER, and asked to meet the author. Ms. Wersba, herself a former actress, was rendered almost mute in the presence of this great stage star, who eventually asked her, "Why don't you write me a play?" When Ms. Wersba said, "I don't know how to write a play," Miss LeG responded: "Learn." A few years later, Barbara Wersba's adaptation of THE DREAM WATCHER opened in Connecticut, starring Eva Le Gallienne. The brand-new playwright recalled opening night: "At the evening's end, as the curtain calls began, and as Miss LeG was led onto the stage by the young actor who played opposite her, a kind of thunderstorm broke. People cheered, and wept, and applauded, and stamped their feet, as she took curtain call after curtain call. As the applause continued, I ran into the lobby where refreshments were being served, grabbed a glass of champagne, and, without spilling a drop, ran up the back stairs of the theatre and handed the glass to Miss LeG when she came offstage. It was one of the happiest moments of my life."

That production of THE DREAM WALKER never made it to Broadway, as initially planned. It would have been nice if it had. I'll always wish I'd seen it. And a stage triumph based on a young adult novel would have been a fitting capstone to the career of an actress who always had an interest in children's books. She died in 1991 at age 92. I wonder what ever happened to her library of books, which Barbara Wersba described as "one of the finest I'd ever seen."

Well, we know where ONE of the books ended up.

I think Eva Le Gallienne -- Miss LeG -- would have been pleased that it now resides with a young teacher who didn't have thousands of dollars to spend...but just wanted to own it because it was his favorite childhood book. She understood about children's books.
Posted by Peter D. Sieruta at 11:36 AM

Aw! What a wonderful story! A Wrinkle in Time is one of my favorite children's books as well :)

I have a question since you seem to know more about older books than most people, have you ever heard of Jack Stoneley? He wrote a small story called Scruffy that the ABC made into a cartoon (and it is REALLY hard to find). I love this book and have read it many times in my life. In the back of the book it says that its based on a true story but I can't seem to find any mention of it.