I have worked at my present job for nineteen years. Last week a co-worker and I were discussing all the changes that have occurred in our workplace over those nearly-two-decades.

She said, "I remember when we had a card catalog."

I said, "I remember when we had so few computer terminals that we had to take turns sharing them."

She said, "I remember when you used to be young."

I'm sure she meant no malice. She just meant that when I first came to this library I was young, and now...well, I'm not.

Of course this wasn't exactly news to me. I've noticed a couple gray hairs. I "play trombone" when reading the newspaper -- pulling it closer and then pushing it back till my eyes adjust to the size of the print. But most of all, I notice it when nobody understands my cultural references. Going into a music store and cheerfully asking, "Hi, have there been any new 5th Dimension records lately?" and getting the response, "What's the 5th Dimension? And what's a record?" Hearing someone mention Coldplay and thinking it's a new cough syrup. Realizing that there are people in their forties who don't remember the Kennedy assassination or the Apollo moon landing.

The other day I made a reference to "Jackie O" and someone asked if she was related to that actress on GREY'S ANATOMY, Sandra Oh.

But surely most people still know her by her full name "Jacqueline Kennedy Onassis," even if they don't recall her husband Aristotle and his daughter, the tragic Christina. Growing up in the sixties and seventies, I remember a time when these names and faces were splashed across the newspapers nearly every day. Jackie was the widow of American president John F. Kennedy who, after his assassination in 1963, moved to New York with their two children, Caroline and John. 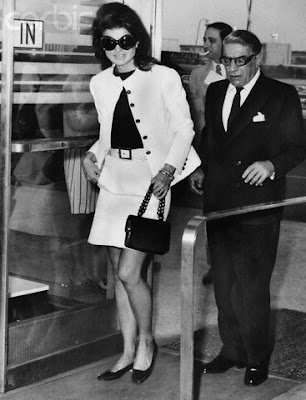 Aristotle -- "Ari" -- Onassis was always referred to in the press as a "Greek shipping magnate." When Jackie and Ari got married in 1968, the world let out a collective gasp. It seemed an odd match. The former First Lady was known for her elegance and class while Ari, despite being one of the richest men in the world, was generally considered coarse and crude. Jackie was a style maven; Ari wore the same suit every day. Jackie was tall and glamorous, while Ari was short and, in the words of Jaqueline's mother, "He looks like a toad." (Afflicted with myasthenia gravis, he suffered from droopy eyes and occasionally even Scotch-taped his eyelids open!) People have always wondered what brought Ari and Jackie together.

Some called it a marriage of convenience. Others thought it was a business deal motivated by money. Still others felt that Onassis provided a sense of security for Jackie, who worried about the safety of her children in the wake of her husband's and brother-in-law Robert's assassinations. It's true that Ari and Jackie seemed to have almost nothing in common. ...Except maybe Madeline. Yeah, that Madeline: the children's book character created by Ludwig Bemelmans.

Jackie was married to John F. Kennedy for ten years and, for the entirety of their marriage, the president owned a large suite on the 34th floor of New York's Hotel Carlyle. Some say that this was where the president spent the last night of his life in November 1963. After his assassination, Jacqueline Kennedy returned to New York and lived at the Hotel Carlyle for two years with her children. One of the most talked-about features of this hotel is the "Bemelman's Bar," an upscale art deco pub decorated with murals created by Ludwig Bemelmans, who did the work in exchange for a free year's stay at the hotel. 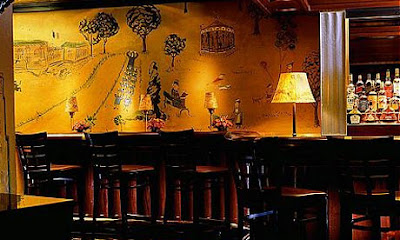 Titled "Central Park," the mural features whimsical scenes of elephants on skates and rabbits enjoying picnics -- and if you look closely, you might even recognize a familiar face from children's books: 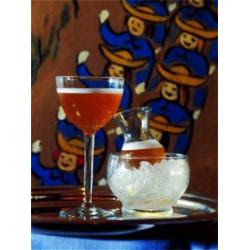 After Jackie married Ari, she spent much of her time aboard his famous yacht, The Christina, which was named after Onassis's doted-upon daughter. Onassis considered the yacht his "floating home" and spared no expense in designing it. In 1953, the shipping magnate reportedly said "I shall ask Ludwig Bemelmans to decorate the nurseries!" and then commissioned the illutrator to paint murals for the yacht's "children's room." The artwork was based on illustrations that appeared in MADELINE, MADELINE'S RESCUE, and MADELINE AND THE BAD HAT.

By the time Jackie and Ari married, Christina was nearly grown -- and reportedly not a fan of her new stepmother. And it wasn't long before Jackie and Ari drifted apart. Ari liked wild parties full of globetrotting pals; Jackie preferred going to bed early with a book. I wonder how many times Jackie slipped away from one of those big yacht parties and sought refuge in the children's quarters, quietly admiring the work of Bemelmans and recalling happier days at the Hotel Carlyle. Surely she had an appreciation for illustrated children's books since she went on to edit several -- including Peter Sis's THE THREE GOLDEN KEYS -- when she later returned to New York and worked as a book editor. I wonder if she ever dropped into the Bemelman's Bar for a drink.

Everyone connected with this story is now deceased. Ari died in 1975. Christina -- depressed and insecure -- did not even live till forty. Jackie has been gone for almost fifteen years now. The murals from the Onassis yacht (which is now a luxury charter ship called the Christina O) were sold at Southeby's some years back. The only Bemelmans' murals still available for public viewing remain at the Hotel Carlyle. Though the names Ari, Christina, and even "Jackie O" may fade from memory and disappear as cultural references, Bemelmans' artwork lives on.
Posted by Peter D. Sieruta at 10:05 AM

Thanks for that, Peter. Now I have another off-the-beaten-path place to visit next time I go to New York!

What a great story! Thanks for sharing. I'm proud to say I knew every name in your story. I've had several "ouch" moments myself lately. However since I'm a middle aged woman I tend to just become invisable!

You must come to New York. We shall go to this pub of which you speak, drink, and indulge in great conversation. My shame is that I have never been. This must be corrected. Come!