I was a teenager myself when I came across this volume at a used bookstore: 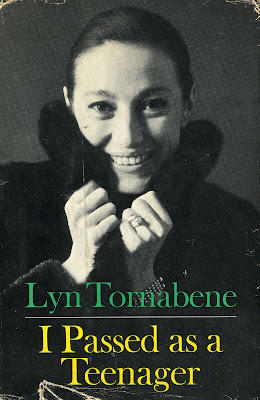 I wasn't sure what the title meant. Being a high school student -- and not the sharpest knife in the drawer, to boot -- I mainly equated "passing" with the idea of passing or failing a geometry quiz or some subject in school. I guess I assumed that the author, Lyn Tornabene, was writing about how she successfully negotiated her way through her teen years: she wasn't a failure as a teenager...she passed with flying colors! That kind of thing. The 1960s and 1970s were big on self-help books aimed at teenagers and I figured this was one of them.

As it turns out, I had it all wrong.

Instead, it turned out to be the author's autobiographical account of infiltrating a large metropolitan high school in the guise of a teenage student. Lyn Tornabene was a married thirty-three year old journalist when she was asked to contribute an article on teenage life to a major magazine. After doing some preliminary research, she dropped the idea -- only to awaken one morning

...mouthing cartoon phrases like Eureka! and Holy Cow! and [...] That's It! and Why Didn't I Think of It Before? Suppose I could be a teenager. Suppose I put on some teenage clothes and wore a wig and mixed in without their knowing I was an adult? [...} 'Passing' was a time-honored way to get a story. A man had passed for a Negro and written an important book about his experience. A girl had passed for a Playboy Bunny for a now defunct magazine and set the world on fire. Newspaper reporters had passed for inmates of jails and sanatoriums, hospital patients and unwed mothers. [...] Had anyone ever tired to pass for a child?

As soon as I learned the fascinating premise of this book, I knew I had to read it. So I bought the volume for seventy-cents (the price is still written inside the front cover) and read it that afternoon. Over the next few years, I read it many more times.

What motivated this particular reading obsession? On the one hand, the book works as a good spy story. Ms. Tornabene went to great lengths to hide her identity, moving to a distant city and living with a family friend while attending "Urban High." She wore a disguise of "typical" sixties teenage clothing, dying her graying hair and wearing glasses to hide her crows' feet. (At the time I didn't question these particulars -- after all, she was AN OLD LADY. Now, of course, thirty-three sounds pretty darn young to me.) Yet, despite her elaborte disguise, this high school spy is frequently questioned by peers. On her very first day of school, one student mistakes Lyn for a teacher and another says, "Your clothes are like a teenager, but your face is old." One reads the book continually wondering when her ruse will be discovered. And if it is, will she be sent to the principal's office -- or the police station?

The other thing I loved about I PASSED AS A TEENAGER is that it was written by someone who WANTED to observe and know young people. Any teenage reader would find that an appealing element. (As Ms. Tornabene notes in her book, "I know that when you're a teenager, nobody looks at your face. I registered in a high school and attended classes disguised as an adolescent, and not one adult -- from Dean of Girls to school doctor -- noticed. I got away with it. And I came home knowing that though teenagers may be running the economy, controlling the airwaves, taking over the highways, and turning 25,000,000 households inside out, nobody is looking them in the eye.") Although the things Ms. Tornabene observed at Urban High may not have exactly matched by own school experiences, there was enough similarity -- particularly in her portraits of the teachers (by turns mean, difficult, uncommitted, and inspiring) to keep me nodding my head in agreement as I turned the pages. Finally, as a teenaged reader, I enjoyed the this-too-shall-pass portrait of adolescence presented by the author. At the end of the volume, Ms. Tornabene asks herself, "Be young again? Not me." and lists some of the advantages of adult life:

I am potent. I can make myself felt. I can hold up my hand and say, "Wait a minute!" I can say No, I won't and Yes, I can. I can say This is me. I am this woman in this house with this man in this small sphere of this large world. This is mine. This small thing. And this. Not much, but mine. See me. I am a person. These are my limitations. These are my potentialities. You may not like me, but that doesn't mean I have to change. I don't have to submit. I don't have to repress. I can pack and go. Or, better yet, I can suggest that you can pack and go.

I found the promise inherent in those words very empowering as a kid.

Published in 1967, I PASSED AS A TEENAGER depicts the Beatles era, a time just before the counter-culture movement of the late sixties. Since then, other writers have followed in Ms. Tornabene's footsteps, "going back to school" as adults disguised as kids. David Owen did it with HIGH SCHOOL : UNDERCOVER WITH THE CLASS OF 1980. Cameron Crowe's experiences are recorded in FAST TIMES AT RIDGEMONT HIGH. And there's even been a movie, NEVER BEEN KISSED starring Drew Barrymore, that plays off this premise.

It wasn't until today, though, that it struck me how many of us have tried "passing as teenagers."

True, most of us have never donned contemporary styles and run down to register at the local high school. But every time one of us writes a short story or novel from the perspective of a young person, we're clearly trying to "pass as a teenager." We're trying to get the words, thoughts, and feelings so true to the real experiences of a young person that we can "pass" without detection.

And even if we don't write for young people, aren't we spying in a foreign land every time we pick up a YA novel and experience the world from a teenage pespective? While the age range on the dustjacket may say 12+ or 14+, I know there are plenty of adults reading and enjoying these books as well. Maybe we read them to appreciate the universal, unchanging aspects of adolescence. Or maybe it's to observe a brave new world, totally unlike the one we experienced as kids. I'm sure I felt just as disoriented trying to read Lauren Myracle's "instant message novels" TTFN and TTYL as a modern kid would feel reading the scene in I PASSED FOR A TEENAGER where teenage partygoers strum guitars and sing "If I Had a Hammer" and "Where Have All the Flowers Gone?"

At heart, every reader is something of spy -- covertly observing the experiences of others -- not by going "undercover," but by going "between the covers" of a book.
Posted by Peter D. Sieruta at 9:57 AM

When I first saw the title, I thought 'passed' in the 'died' sense and that it was an old teen vampire book.

I read this book in 1969, the summer before I was to start my freshman year. I bought the book in order to 'get a handle' on being a high school student. It was an entertaining read. Lyn Tornabene later went on to write a definitive biography of Clark Gable, which I am now reading in 2010.