Yeah, I Made a Misteak

If you dropped by for brunch last Sunday you may recall seeing this little gem: 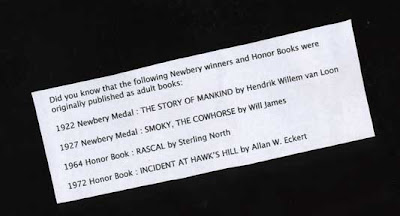 Notice the confident prose? The authorial assurance? The cocky (some might even say “know-it-all”) tone?

Man, when you visit the Collecting Children’s Books blog, you can always count on that guy Peter knowing his stuff!

A couple hours later, though, I received this comment from Wendy:

Seriously, what is this about The Story of Mankind being originally published for adults? The author addresses children quite clearly in his text. No matter the imprint that published it, can you convince me that it was actually considered an "adult" book at the time?

I immediately thought, “But...but everyone knows that book was originally published for adults...”

Suddenly I wasn’t so sure.

Today I did a little library research on the matter. Checking the 1921 volume of BOOK REVIEW DIGEST, I discovered that nearly all the contemporary reviews of THE STORY OF MANKIND referred to it as a book for children. Still, I thought it would be a good idea to “go right to the source,” so when I got home from the library, I got out my own copy of the 1922 Newbery winner.

Unfortunately, the book is on my tallest bookshelf and the only way I could retrieve it was by standing on my tiptoes and then gently nudging the volume to the edge of the shelf with a coat hanger. (Don’t worry, it’s a plastic coat hanger.) Looking at THE STORY OF MANKIND, I realized why most used bookstores place this volume in their adult history section; I could also understand why so many people (including, yes, me) have thought it was originally published for adults. It has the look and feel of an adult book (I suspect that publisher Boni and Liveright did not have a separate children’s division at the time) and nowhere on the dustjacket is there an indication that it's a book for young readers -- except buried within two quotes that refer to the author’s previous volume, ANCIENT MAN. Even the text of the book, though lively and readable, doesn’t make too many concessions to the juvenile audience. Nevertheless, if you read closely, you will recognize THE STORY OF MANKIND really is written for kids, with passages such as “It is very difficult to understand the people of bygone ages. Your own grandfather, whom you see every day, is a mysterious being who lives in a different world of ideas and clothes and manners. I am now telling you the story of some of your grandfathers who are twenty-five generations removed....” The book also concludes with “An Historical Reading List for Children.”

So...I must concede that I made a big error when I said that MANKIND was published as an adult book in last Sunday’s blog.

Still, it was almost worth being wrong to have this opportunity to spend an hour or two today with my copy of THE STORY OF MANKIND. It’s one of the most valuable books in my collection. Every time I talk about how much a book is worth, I feel like I have to add that I’m actually as poor as a church mouse. But occasionally a very special book turns up that I feel the need to rescue, so I charge it on a wing and a prayer (the prayer: “Please don’t let me lose my job until I get this book paid off!”) and then torture myself for weeks thinking, “Did I do the right thing? Am I going to regret this?”

I’ve owned my copy of THE STORY OF MANKIND for about ten years now (in other words, I think I just finished paying it off) and have never regretted this purchase. First editions of this book aren’t impossible to find (remember, check out the ADULT history section at your favorite used bookstore!) but copies with dustjackets almost never turn up. My copy has a dustjacket, though it’s in fragments and most of the dj’s spine is missing: 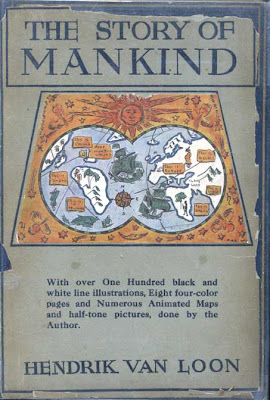 But what makes this one extra special are the extras inside. They include a photograph of author Hendrik Willem Van Loon, which was used to promote the book: 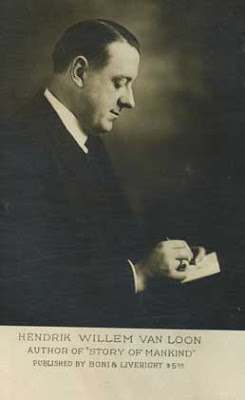 Also “laid in” is an invitation to a Van Loon exhibition that was held many years later, in 1942, as a benefit for refugees from the Netherlands East Indies: 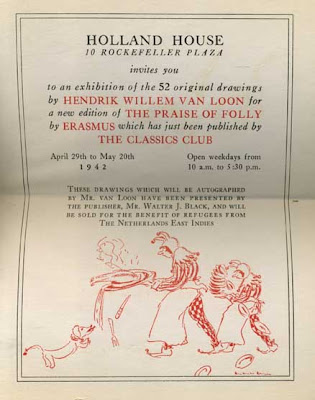 Even better is a TLS from Mr. Van Loon. When I first heard the book included a “TLS,” I thought it was a clipping from the Times Literary Supplement. Turns out that, in the world of bookselling, a TLS is a “typed letter, signed.” This one is on stationery from Antioch College in Yellow Springs, Ohio, where Hendrik Van Loon was a professor of Social Sciences. I have no idea why the stationery says “Office of the President” or who Van Loon is addressing as “Lin.” He seems to indicate Lin is his best friend. If you click on the image below, you should be able to read the letter, which reveals a lot of the author’s humor and personality. And get a load of the dated contractions and the flying caps: 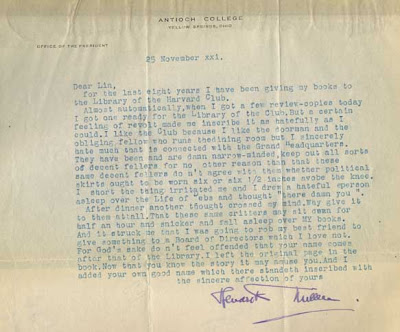 And here is a copy of the inscribed page that Van Loon references in his letter, along with a sketch of one of the “critters” falling asleep over one of HIS books: 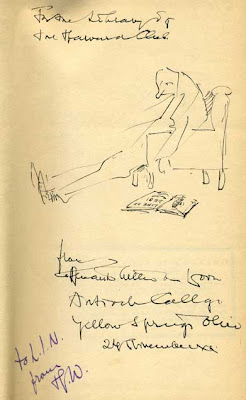 Incidentally, the inscription is dated “24 November xxi,” just five months after Van Loon completed the manuscript (a note at the end of the book says Van Loon finished the book on “Saturday, June 26, xxi.”) and several months before THE STORY OF MANKIND won the very first Newbery Medal as the “most distinguished contribution to American literature for children” in 1922.

Yes, it is a children’s book.

And, yes, I made a mistake. 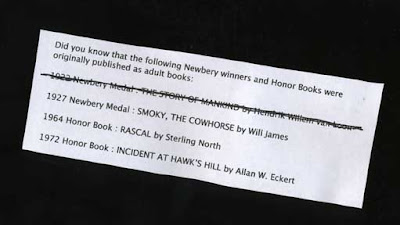 Not my first, won’t be my last. Some would say my whole life has been nothing but one mistake after another.

...But adding this special copy of THE STORY OF MANKIND to my collection was definitely not one of them.
Posted by Peter D. Sieruta at 2:29 AM

I feel your pain. I made a small grammar mistake on an exam I was giving to my Native English class and a student discovered it and rapped me sharply on the knuckles with a note next to the offending item. You made a good defense; it could have happened to anyone. Your loyal readers got a really good blog post out of it.

The writing (and its length) is so beyond what children are expected to read today, I really wonder what age it was aimed at. Or maybe it was assumed that some adult would read a chapter to their kid(s) every night, epoch after epoch?

I love that grandfather quote. But the illustrations are one of my favorite parts of the book.

This reminds me of the classic, A Child's History of the World by Hillyer, the one time headmaster of the Calvert School. It was one of my mother's favorite books so I read it as a child and loved it almost as much as she did. The dust jacket, alas, did not survive.

I do recommend it for all history buffs.

Peter, thanks for the fascinating post and for the research you did; in your defense, I'm going to wager that I read the book more recently than you had, and also--since I wasn't very entrenched in the world of children's literature before I read the Newbery books--I knew nothing about what "everyone knows", which put me at an advantage.

Interesting post. The great think about the human brain is how easily we adapt, usually we read what we expect, so little errors go unnoticed. Although once noticed it can annoy for eternity.

my Native English class and a student discovered it and rapped me sharply on the knuckles with a note next to the offending item.

We are one of leading online gift shop for last 7 years for delivery of flowers, gift hampers and cakes to Trivandrum, Kochi, Kottayam and almost all over Kerala. We do same day delivery for most of the perishable items like cakes, flowers. We are specialized in delivery to non-regular towns and cities in Kerala. http://www.keralaflowerplaza.com

We are one of leading online gift shop for last 7 years for delivery of flowers, gift hampers and cakes to Trivandrum, Kochi, Kottayam and almost all over Kerala. We do same day delivery for most of the perishable items like cakes, flowers. We are specialized in delivery to non-regular towns and cities in Kerala. http://www.keralaflowerplaza.com

The visit was useful. Content was really very informative.