Everyone's had their eyes tested, right?

You look at a chart across the room and then read back the random series of letters on the big top line or the tiny bottom line.

But what if you're too young to know the alphabet?

Then, instead of letters, you view a chart containing pictures of dogs, cats, chairs, and mice. After all, everyone can identify pictures, right? Wrong. When I had my pre-kindergarten medical exam, the doctor asked me to tell him what I saw on the chart and I was going great blazes -- clown, foot, baseball, fish -- until I came to an item I didn't know: 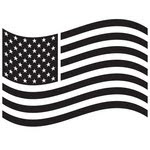 I had no clue. "Is it a box?" The doctor said no. Actually, the black-and-white squarish-looking item seemed to be tipped sideways. "A tin can?" No. At the age of four I don't think I'd ever seen a flag before. I ended up passing the vision test but it's probably a good thing I couldn't read because I no doubt would have seen my doctor writing on the form: "Patient deemed unintelligent. And unpatriotic."

Pictographs or pictograms -- images used to represent an object or idea instead of words -- have a history dating back to the first cave paintings and are still used today in all kinds of signage. Who doesn't know the universal "no" sign: 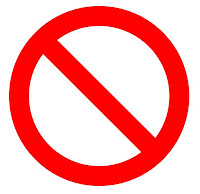 It transcends language differences and can even be understood by people who are unable to read, or children who have not yet learned how to read (er...most children...glad that one wasn't on my vision test.)

It's not surprising that, throughout history, many children's books have used rebuses -- the device of substituting pictures for words or sounds -- as a learning technique for pre-readers. 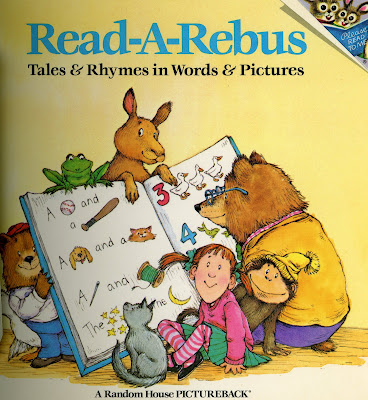 A note to parents explains, "Pictured animals and objects appear throughout the stories in place of words, and your child can participate right away in 'reading' these rebuses as you read the printed words aloud. While you read the story, move your finger under the words you are saying. This will help your child understand that we read each line from left to right and the page from top to bottom. The child will also begin to see that the little black squiggles called letters represent 'talk written down.' Such learning is new to the young child and basic to his or her later reading success."

Here is an sample page from that book: 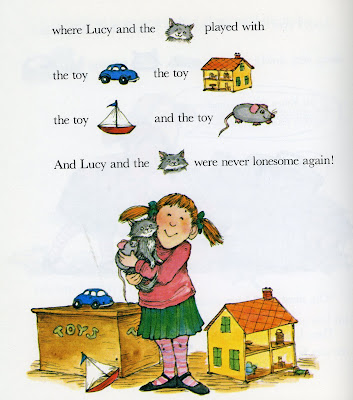 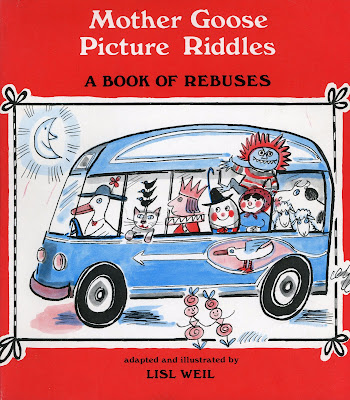 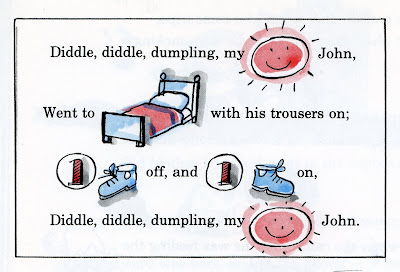 Incidentally, I always think it's a bit of a cheat when one of the pictures -- like the bread loaf that ends the second verse -- actually has a word written on it...but I suppose that's another way of teaching as well. Who knows how many kids learned to spell B-R-E-A-D from looking at the picture in this book?

Lisl Weil was not the first to give the rebus treatment to nursery rhymes. Back in 1953, Joseph Low ("with help from Ruth Low") published MOTHER GOOSE RIDDLE RHYMES, 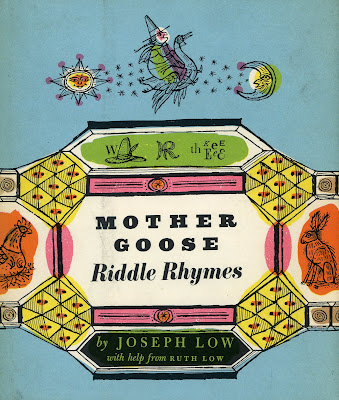 a collection that contains twenty traditional verses, including this take on "Ladybug, Ladybug": 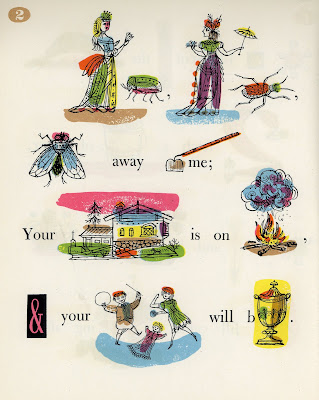 In comparing the two Mother Goose volumes, I notice that the earlier volume contains more difficult rebuses -- urn, tar, sow, butt (depicted as a ram butting into a boy) -- and even conveys some prepositions such as "in," "up," and "around" through images.

I've often thought that the farther we go back in time, the more challenging children's books are in terms of language and expected reader comprehension. REBUS, ABC, published by McLoughlin Brothers in 1898 as a simple paper pamphlet with stitched binding, contains some of the hardest rebuses of all. 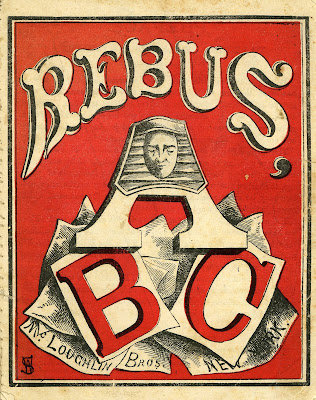 Do you think many pre-readers/early readers today would be able to figure out the following adages: 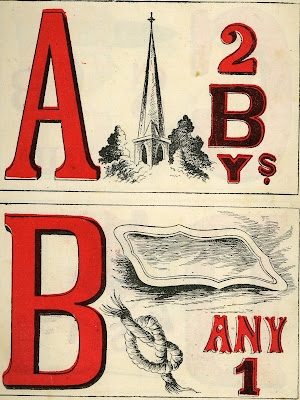 They represent the phrases "Aspire to be wise" and "Betray not anyone." Too easy? Well, what about these: 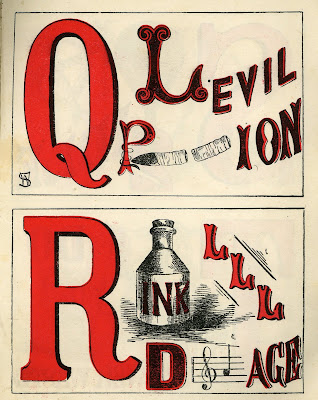 Even if kids could figure them out, would they be familiar with the words in the aphorisms?

I'm not saying that young people were necessarily any smarter back in the day, but I do think that more was often expected of them. All you have to do is compare those entries from REBUS, ABC to the very simple examples in READ-A-REBUS nearly ninety years later.

Incidentally, the reason I'm thinking about rebuses today is that I just saw one employed in an advertisement for a new TV show: 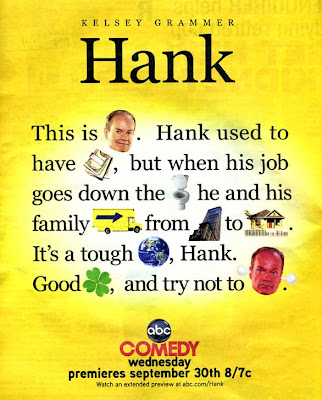 I had never seen a rebus ad before and wondered what motivated it. Was it just a way to be eye-catching or different, or have we become such a nation of lazy readers/text-messagers (CMIIW...NO, DF! LOL!) that the advertisers now think we're better at reading pictures than those "little black squiggles" called letters?
Posted by Peter D. Sieruta at 8:49 AM

OK, I got the last one, but what on earth is the picture in the one right before it? A finger? A carrot?

I'm not sure I would have figured it out either, except the answers are at the front of the booklet.

Hmany kids today would even know the word "quell"?

Thanks for reading Collecting Children's Books!

Wow, I would never have guessed that it was an ash. Thanks for the explanation!

We are one of leading online gift shop for delivery of flowers and cakes to Mumbai, Pune, Nagpur and all major cities of Maharashtra, We do same day delivery for perishable items like cakes, flowers. You will find a wide range of gifts for all kind of Occasions.

We do same day delivery for perishable items like cakes, flowers. You will find a wide range of gifts for all kind of Occasions.