When you live to be 93 years old, you've celebrated a lot of Christmases.

But for Clyde Robert Bulla, Christmas 1931 was the holiday he remembered best.

Growing up on a small Missouri farm, he developed an early interest in writing -- despite his father's firm insistence that he could never become an author because "you have nothing to say." During his teenage years, Clyde also got interested in music. When he learned the Metropolitan Opera House was going to broadcast a Christmas Day radio performance of HANSEL AND GRETEL, he skipped out of a family party, citing a recent wood-chopping injury. He later recalled:

It was a raw, blustery day, but there was wood to burn. I had a Christmas dinner of my own -- a dish of cranberries and a can of pork and beans. All this, and HANSEL AND GRETEL! I closed my eyes and I was in an orchestra seat, hearing my first opera. That may well have been my best Christmas.

Ten years later, Clyde Robert Bulla published his first book -- a novel for adults. A friend would later introduce him to author-illustrator Lois Lenski, who encouraged him to try his hand at children's books. In the coming decades he'd write dozens of middle-grade novels (THE DONKEY CART, 1946; GHOST TOWN TREASURE, 1957; SHOESHINE GIRL, 1975) and, while most are no longer read, they earned him enough money to travel the globe seeking story material and seeing opera.

In his early books, Bulla had the strange habit of plunking songs right into the middle of his narratives. 1950's SURPRISE FOR A COWBOY concerns city-kid Danny Hopper spending the summer at his uncle's ranch. Halfway through the book, you turn the page and see: 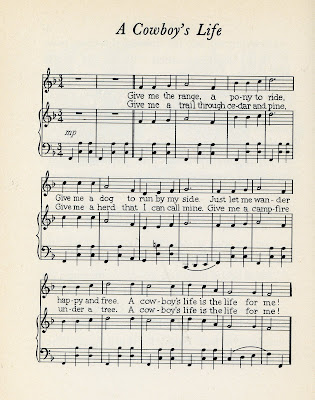 While it's not unusual for novels to include poems or song lyrics, it is rare to find a tune with musical notations right in the middle of a story. Eventually a critic referred to the songs in Mr. Bulla's books as "interruptions" and he stopped including them.

But then they starting popping up in books by his old friend Lois Lenski! At the time, Ms. Lenski was traveling the country and writing stories about often-disadvantaged children from different regions, including BAYOU SUZETTE (1943), BLUE RIDGE BILLY (1946) and the Newbery-winning STRAWBERRY GIRL (1945.) Each volume would begin with a foreword in which the author described how she came to write the story; most would also include a song about the region with words by Lenski and music by Bulla. 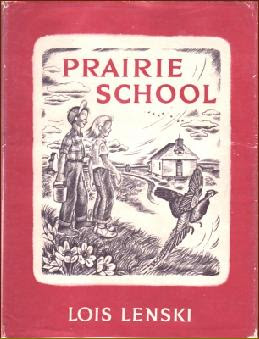 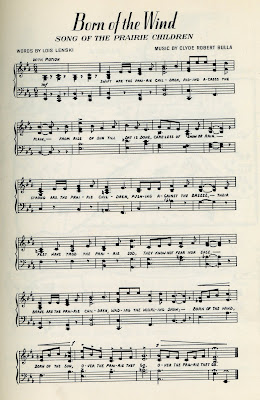 Truthfully, the songs seemed unnecessary intrusions in these books as well -- and I don't quite buy Ms. Lenski's justification that she created "regional songs for the inarticulate children I wrote about, who could not do it themselves." I mean, don't the fields of folk music, bluegrass, country, and the blues exist because those children could do it themselves?

A few years later, Bulla and Lenski would collaborate on several music books aimed at preschoolers. Inspired by hearing a little boy sing the words to a story that had been read to him many times, Ms. Lenski said, "That gave me an idea. Why can't children learn to sing their books as well as read them? I remembered all the controversy over 'why Johnny can't read,' and the thought crossed my mind that maybe if he could sing his book -- the words in the book -- it might help him to learn to read the words." Together, Lenski and Bulla wrote I WENT FOR A WALK (1958), AT OUR HOUSE (1959), and WHEN I GROW UP (1960.) I'm sort of touched that a child went through our library copy of WHEN I GROW UP and laboriously printed out each note on the page: 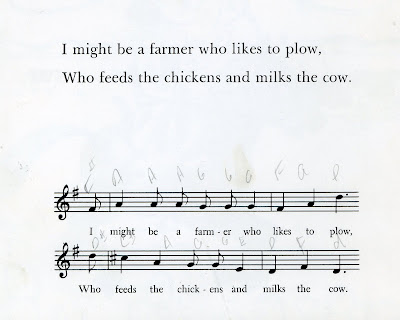 even as I'm appalled by the content of the book's two songs. "Song for a Boy" lists all the things a boy may become when he grows up -- a pilot, a doctor, a fireman -- while "Song for a Girl" includes such career options as typist, nurse, and librarian..."but oh, a mother is best of all." (Needless to say, "Song for a Boy" makes no mention of becoming a father.)

Incidentally, it was during the time Mr. Bulla was writing these books that he actually had the opportunity to perform at the Metropolitan Opera himself. A friend from publishing worked with the Met's supernumeraries and finagled to get Bulla onstage as a townsperson during a performance of DIE MEISTERSINGER. It was a dream that Bulla probably had from the first time he heard that radio opera in 1931...but it was not to be. The day before the performance, as he sat eating lunch with friends at a restaurant a report, came over the radio saying that President Kennedy had been shot. The next evening, instead of stepping onto the stage of the Met, Clyde Robert Bulla sat alone in his hotel room, looking "down at the people in the street as they drifted up and down, gathering in little knots, and drifting on again. Now and then I heard wailing."

Although never a stellar figure in children's books, Mr. Bulla left his mark with a wide variety of middle-grade novels as well as those opera guides for young people. Regarding his collaborations with Lois Lenski, he said, "I like to think that here and there, now and then, someone may be singing our songs."

After all, someone went to the trouble of assigning letters to the musical notes in our library copies of those books. Perhaps one of these days I'll pass someone on the street singing,

If I ever do hear someone singing that song...I hope she has a good voice.
Posted by Peter D. Sieruta at 9:58 AM

I remember seeing a song at the end of a book I read once...don't remember the name, but it was about a family who went out to California so the father could participate in the Gold Rush, and there was a kitten/cat named Nugget in the story. The father was having difficulty finding gold, but he helped someone with money in some way and was rewarded with a pouch full of either gold nuggets or gold dust. The last page of the book had a song called "There's Gold In California". Now that I've read this post of yours, I bet it was a Bulla composition.

Set in today’s day and time, Me and My Best Friend is about a young boy, his faithful companion and their exciting adventures.

Henry and Liam are the best of friends and they do everything together. They can run and play all day long. But when Henry the puppy gets tired and tries to take a nap, three-year-old Liam keeps waking him, wanting him to play some more. Will Henry get any rest?

Get your children involved with this beautifully illustrated book. Your child will love to match up words and pictures, and find Liam, who keeps hiding in his bedroom. Perfect for the young reader!

When I was a child I loved the Little House books by Laura Ingalls Wilder. In the later books, there was a song Laura loved, In the Twilight. I made up a tune for it, but since I wasn't a very musical child (or adult) it was rather monotonous. I think of that song frequently and I still wish she had included the music.

I'm proud to say that I knew dear Clyde Robt. Bulla. In fact, my 'bibliobabe' friends, Joanie, Naomi, Vicki, & I once rode in the back of a pickup truck w/ CRB, in Central MO State's homecoming parade. He was the dearest, most soft-spoken gentleman, fond of margaritas, much-loved by his many friends, a swellegant letter-writer, and downright glorious at the ivories, once seated at his grand piano. bless him forever