I am reading a book from 1970 called A STAR TO THE NORTH.

It's about a teenage brother and sister chafing at the upwardly-mobile lifestyle imposed by their business-exec father. Most of the year Nathaniel and Kimberly attend boarding schools, but now that summer's arrived, Dad has a supermarket job lined up for Nathaniel and plans to send Kimberly ("she'll turn out to be some blasted hippie if she doesn't fall into line") off to camp.

But Nathaniel has a secret in his pocket: a cashier's check for $500 and a letter from his grandmother urging him to use the money any way he wishes. ("I want you to follow your own star, and though I can't buy you a star with five hundred dollars, it might help with the first step.")

Nathaniel and Kimberly follow their star to the wilds of Canada, running away from their father to spend the summer with their live-off-the-land outdoorsman uncle Seth.

In one way or another, most young adult novels seem to be about kids finding and following their own particular stars. It’s a rite of passage for every teenager -- whether fictional or real.

So for now, let’s leave fictional characters Nathaniel and Kimberly tromping around the Far North and instead focus on three real-life teenagers growing up in Beverly, Massachusetts, and see where their stars took them.

It was the late 1920s and Barbara, Brad, and Fred were all classmates at Beverly High School.

The three were good friends, but I know almost nothing about their friendship. Did they trade homework assignments? Maybe. Did they hang out at the soda shop after school? Could be. Were there any romantic entanglements between them? I don’t know. All I know is that they were friends.

One thing that Barbara and Brad clearly had in common was a love of writing. At Beverly High, Barbara was class poet. She wrote stories for a magazine called THE TURRET while Brad sold some some of his work to BOY’S LIFE. Was Fred interested in writing too? I don’t know.

After graduating, the three went off in different directions, each following his or her own star.

Barbara went to Wellesley, then worked in the theatre as a prop girl and stage manager. Next came war work with the Navy. There were jobs in advertising and Civil Service positions. Eight years with a celebrity news service in Hollywood and a job in the story department at CBS television. During this time she got a master’s degree and began teaching -- in California, Kentucky, Colorado, and ultimately Montana. And all along she was writing, selling stories to REDBOOK and other slick magazines of the day. She wrote her first novel, SAM, for adults and was surprised when it was published as a children’s book. But soon she was a full-fledged, full-time writer of children’s books, publishing dozens and dozens over the next three decades.

You don't hear the phrase "midlist author" much these days, but back in the seventies and eighties, Barbara Corcoran perfectly fit the profile. While other authors wrote big splashy books, won literary prizes, and hit the bestseller lists, Ms. Corcoran quietly and dependably published solid, well-crafted novels that earned money and were enjoyed by readers, yet never got a huge amount of attention from reviewers or award juries. Ms. Corcoran once said, "I think I'm a competent writer. I know the tricks of the trade." I think she's being modest. In books such as THIS IS A RECORDING (1971), A DANCE TO STILL MUSIC (1974), ME AND YOU AND A DOG NAMED BLUE (1979), and many others, she revealed a real gift for creating multidimensional characters and compelling storylines. It's a shame that she never had that one big bestseller or book award that would have propelled her to the front rank of novelists. What she did have was a long list of titles impressive in terms of both variety and overall quantity. Capable of writing as many as five books a year, Barbara Corcoran occasionally had to employ pseudonyms such as Paige Dixon (MAY I CROSS YOUR GOLDEN RIVER?) and Gail Hamilton (TITANIA’S LODESTONE), so that her books would not compete with each other for sales.

Barbara Corcoran led the kind of life that many aspiring writers dream about, continuously publishing books while traveling the world (Russia, Europe, a year in Hawaii) and enjoying the fruits of her labors, which included a Mercedes Benz purchased in Germany and shipped home to Montana.

Barbara’s high school pal Brad led a much more modest life. After attending Bates College, he began working as a reporter for his hometown newspaper. A lifelong fan of Thoreau, Brad eventually gave up that job -- and the rat race -- moving with his wife to rural British Columbia where they rebuilt a cabin, lived off the land, and became early advocates for organic living. Beginning with AT HOME IN THE WOODS : LIVING THE LIFE OF THOREAU TODAY, Bradford Angier wrote more than three dozen books about wilderness survival, including LIVING OFF THE COUNTRY and FREE FOR THE EATING.

And what of Barbara and Brad’s high school friend Fred? He never wrote a book, nor did he travel far from home. But his star took him in a somewhat unusual direction as well. After graduating from Boston College, he attended St. John Seminary and became a Roman Catholic priest. Reverend Frederick Minigan served in a variety of Massachusetts parishes until he was in his eighties.

I can’t remember where I saw it, but I once came across the expression “Old friends are gold.”

Okay, I do remember where I saw it.

It was on a Hallmark card.

But still, it’s a valid sentiment. No matter which direction we go in life, we often feel a deep connection with our oldest friends. This must have been true for Barbara Corcoran, Bradford Angier, and Fred Minigan because, over forty years after graduating Beverly High School, their lives -- so very different from outside appearances -- continued to intersect.

In 1970, Barbara and Brad joined forces and wrote a book together -- A STAR TO THE NORTH: 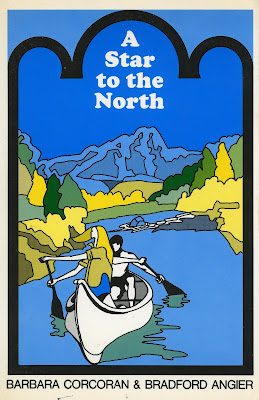 It’s an excellent collaboration, combining Ms. Corcoran’s sure-footed plotting, believable characterizations, and natural dialogue with Mr. Angier’s detailed knowledge of how to survive in the woods.

And look who they dedicated the book to: 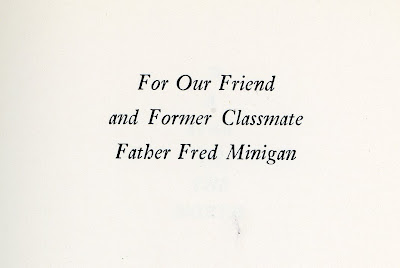 The reason this is all so intriguing to me is because A STAR TO THE NORTH is one of a handful of Bradford Angier and Barbara Corcoran books in my collection that were once actually owned by Fred Minigan. Throughout the years, these two authors -- one eking out an existence in Northern Canada, the other tooling around town in her Mercedes -- continued to remember their old high school bud and send him copies of their published books, each personally inscribed. Here is the endpaper of my copy of A STAR TO THE NORTH: 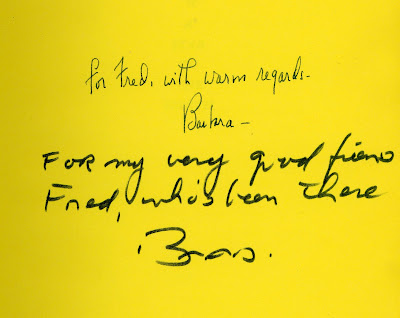 Very late in life, Barbara sat down and wrote her autobiography. She recalled, “I wrote at full speed, not stopping to re-read. It was fascinating to come upon experiences and people in my life that I had virtually forgotten, and to find myself giving a different perspective to past events.” Unfortunately this memoir was never published and today, with nearly all her books out of print, she is no longer widely remembered by readers. I doubt that autobiography will ever be published now.

Such is the fate of midlist authors.

And that’s really too bad, as I’d like to know more about her life, her amazing ability to write four or five books a year, her “tricks of the trade.”

And of course I’d like to learn about the friendship of these old friends -- Barbara Corcoran (1911-2003), Bradford Angier (1910-1997), and Fred (1912-1997) -- whose "stars" took them in such different directions, yet obviously stayed in touch all their lives. What adventures did they share in high school? How close were they as adults? How in the world did Barbara and Brad come to write a book together when they were nearly sixty years old and how did Fred react when he learned that book was dedicated to him?

Maybe we’ll never know the answers to these questions, but I think about them every time I see my copy of A STAR TO THE NORTH on the bookshelf.
Posted by Peter D. Sieruta at 3:00 AM

This was an intriguing story. Halfway through I couldn't wait to find out what happened to Fred. The book dedication made a satisfying ending, and was so much better for being true.

Wow what a great post. This is why I come back here again and again- I learn something new, find out something interesting and am inspired to check out a new author. Thanks for this.
Chris in NY

May I Cross Your Golden River is a favorite of mine; I had no idea Paige Dixon was a pseudonym and there were other books out there by the author. I will go looking. Thank you so much!

I have also long loved May I Cross Your Golden River, and have read several others of Barbara's works.

I agree that it's shocking how someone who published so much has virtually dropped off the face of the earth. I just Googled her name and all I find are things about two other people, one in real estate and another from reality tv.

Sad! But glad that you (and your readers) remember!

I didn't realize that Sam was written for adult readers, but I remember feeling a little challenged by it when I read it in 6th or 7th grade.

Now I am sad because my library system does not have A Star to the North. But I did get a lot of Angier books.

Stumbled upon this entry after reading some reviews from the Newbery Project and then wondering whatever became of this author. A Star to the North was my first read from BC and was good enough that I continued on to read several of her books (though this book continued as my favorite). Thank you for posting the story behind your volume. Fascinating how those connections are made.