You never know what to expect when you read a book for the second time.

Quite often re-reading an old favorite is like meeting up with an old friend; you fall right back into the relationship as if no time has passed at all.

Sometimes you "grow into" a book and like it even better the second time around. Other times you grow out of a book and end up liking it less.

And sometimes it just leaves you asking questions.

I was left with some questions after re-reading Farley Mowat's OWLS IN THE FAMILY this past week. Published in 1961, the story concerns Billy, a 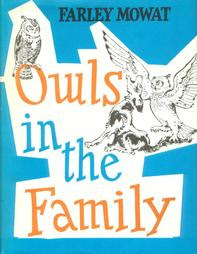 Saskatchewan boy who adopts a pair of great horned owls. In a series of sitcomlike episodes, Wol and Weeps turn a town pet parade upside-down, tease Billy's pet dog, and scare off the local minister and postman. It's all great fun, and the fact that forty customers have submitted online reviews about this book to Amazon.com shows that OWLS IN THE FAMILY still has kid-appeal nearly fifty years after publication. I first read this novel in the mid-sixties and remember enjoying the antics of the owls -- and even sort of wishing I had a Wol or Weeps of my my own. Reading the book again in 2009 -- as an adult, in a new century -- what struck me most was the many casual references to guns and shooting. Early in the story, Billy and his friend Bruce go exploring the Canadian prairie. When they come across a small lake filled with mallards, Bruce exclaims, "Wish I had my dad's gun!" Later, Billy obtains Weeps from a boy who "had found an owl's nest in a bluff near Sutherland, and had shot the old owl and all but one of the young ones with his .22 rifle. He only brought the last young one home as a sort of joke he was going to play on his dog." 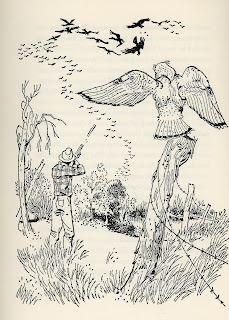 Toward the end of the novel, a group of crows attack Billy's family and Wol in a boat. Billy tells us, "Next morning Dad got out his shotgun and swore he was going to even up the score," which is followed by a shooting scene that ends with "a lot fewer crows around Dundurn." It's not until the end of the book that we realize this story is autobiographical (the family's name is even revealed to be "Mowat") and I guess that's what got me asking questions. Back when I first read OWLS IN THE FAMILY in the sixties, I was unfamiliar with the name "Farley Mowat." Today I know this author is also internationally recognized as a naturalist and conservationist. His 1963 book (later a movie) NEVER CRY WOLF is often credited with changing public opinion on the once widely-feared wolf. This got me wondering: if most of his friends and family were big sport hunters during the years that Farley Mowat was growing up in Saskatchewan, did he participate as well? If so, when he did he change from hunter to naturalist? To find the answers, I had to do a little hunting myself...hunting in the pages of some of Mr. Mowat's other books.

I finally found the answer in his 1993 memoir BORN NAKED.

Farley Mowat's father had worked as a clerk and bee-keeper before stumbling into a job as a librarian. For the next few years the family moved about Canada, as his father held library positions in several towns. At one point they even resided in the library where his father worked. In 1933, they settled in Saskatchewan for a few years. This is where Farley adopted his pet owls Wol and Weep, along with a dog, rats, gophers, and pigeons. It was also where his father became deeply interested in hunting. At first Farley would accompany him, though he began to realize "killing was making me uncomfortable." When his father bought him a twenty-gauge shotgun, he said, "I was grateful but would have been more so had he instead chosen to buy me a decent pair of binoculars." His father then planned a goose-hunting trip, hoping to "recapture the mutual excitement and camaraderie of our first hunting trips."

Farley Mowat would later recount that trip in BORN NAKED:

The windy silence was soon pierced by the sonorous cries of seemingly endless flocks of geese that drifted, wraith-like, overhead. They were flying low and we could see them clearly. Snow geese, startlingly white of breast but with jet-black wing tips, beat past while flocks of piebald wavies seemed to keep station on their flanks. An immense V of Canadas came close behind.

As the rush of air through their great pinions sounded in our ears, we jumped up and, in what was more of a conditioned reflex than a conscious act, raised our guns. The honkers veered directly over us and we both fired. The sound of the shots seemed puny, lost in the immensity of wind and singing wings.

It had to have been pure mischance that one of the great geese was hit for, as we later admitted to each other, neither of us had aimed. Nevertheless, one fell, appearing gigantic in the tenuous light as it spiralled sharply downward. It struck the water a hundred feet from shore and I saw with sick dismay that it had been winged. It swam off into the growing storm, its neck outstretched, calling...calling...calling after the vanished flock.

That was the last time Farley Mowat hunted for sport.

It may not have been the last time he ever shot a gun though.

In doing research today, I came across another anecdote from the author's childhood in which he shot a boy with a BB gun in order to prevent that boy from shooting a bird. Farley Mowat concluded, "He received a bruised posterior and the bird lived. I was happy with that."
Posted by Peter D. Sieruta at 9:58 AM

It reminded me of: Logbook for Grace. (Not a children's book, but a fascinating read.) Which also has a disturbing blend of a fascination with animals and a willingness to kill them.

I'm glad you were able to find out about Mowat's true feelings.

This is rapidly becoming my favorite blog.

Thanks for this -- I knew that the protagonist of Owls in the Family also wrote Never Cry Wolf, but never knew the story of how it happened. Curiosity satisfied!

Although I stumbled across your blog looking for something completely different, I read quite a bit and particularly enjoyed this post. Thanks, and you're bookmarked.

Just finished reading OITF to my sons - we loved it as much as I did as a kid. I am trying to find out what happened to Wol and Weeps - any luck with that one?