When I was a kid, I used to love looking at Norman Rockwell's paintings. They seemed to be everywhere back then...on calendars...on magazine covers...we even had a quartet of jigsaw puzzles based on his famous "Four Freedoms" posters. But I learned early-on never to refer to Rockwell as an artist. Every time I did, someone (usually an art teacher) would sneer, "He's not an artist...he's an illustrator."

I wasn't sure what the difference was, though someone once explained: "An illustrator's work is on the cover of SATURDAY EVENING POST. An artist's work is in a museum."

So I've been chuckling every night this week as I pass a billboard on the side of the expressway announcing a major Norman Rockwell exhibition at our city's museum, the Detroit Institute of the Arts.

I guess he was an artist after all!

One day during my lunch hour, I'll have to walk across the street and see this exhibit for myself. I wonder if it will include any of the illustrations he created for children's books. He only did a handful.

In 1935, the Heritage Press asked Norman Rockwell to illustrate new editions of Mark Twain's THE ADVENTURES OF TOM SAWYER and THE ADVENTURES OF HUCKLEBERRY FINN. The artist studied the novels, traveled to Hannibal, Missouri to soak up local atmosphere, and produced artwork that wonderfully captured the youthful exuberance and Americana of Twain's texts. TOM SAWYER was published to great acclaim in 1936: 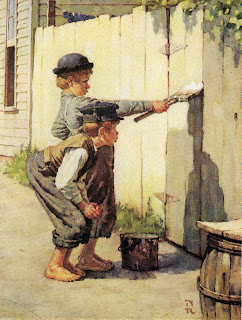 However, Rockwell dragged his feet on HUCK FINN to the point where he began getting letters from his publisher saying things like, "I have tried to be pleasant.... I like you and Mrs. Rockwell too much to want to do anything nasty; besides, legal action would not bring beautiful pictures from you, and I do want to get beautiful pictures from you.... But do you not think that I have the right to conclude that you are taking advantage of my good nature?" The book was finally published in 1940 with penciled chapter headers and eight oil illustrations: 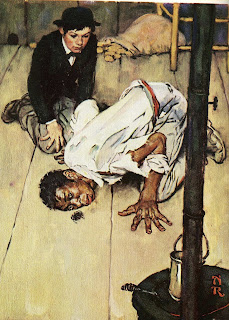 In the late 1960s, the psychiatrist Robert Coles approached Norman Rockwell about illustrating a children's book concerning the then-controversial topic of desegragation. The two men traveled together, with Coles interviewing urban families about educational issues, while Rockwell sketched portraits of their children. Though written in the form of a novel, DEAD END SCHOOL is clearly a polemic with a strong social agenda -- and is even classified as nonfiction in some libraries. But Rockwell's relaxed black-and-white illustrations help to make this 1968 book more accessible and inviting to young readers.

The most unusual Rockwell work for children may be THE NORMAN ROCKWELL STORYBOOK. In this oversized 1969 volume, Jan Wahl (of PLEASANT FIELDMOUSE fame) contributes twenty very short stories inspired by some of Rockwell's best-known paintings. 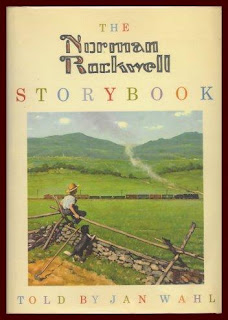 In looking through our library's copy, I noticed that, instead of full-color artwork, a few of the pages contain muddy black-and-white reproductions. This confused me until I looked closer and realized that someone had torn the original color illustrations right out of the book! Obviously a conscientious library worker then tracked down another copy of THE NORMAN ROCKWELL STORYBOOK, photocopied the missing pages, and glued them into our edition. If you know anyone who has these two pictures on their wall 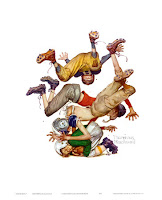 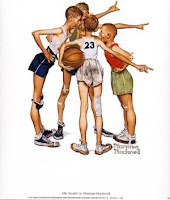 take them out of their frames and see if they have jagged edges, as if they've been torn out of a book...a library book. Then give me their name and number. I wanna have a little talk with them....

Actually, Norman Rockwell's biggest contribution to children's books probably doesn't come from any illustrations he produced, but rather from a child he produced. The artist's middle son, Thomas Rockwell, grew up to become a writer of children's books, most famous for the irresistibly-titled novel HOW TO EAT FRIED WORMS. Published in 1973, this crude and comic story is hugely popular among young readers (if not among critics), has won many "kids' choice" book awards, and has been filmed for both television and the big screen.

Although future Caldecott winner Emily McCully did a fine job with the illustrations for HOW TO EAT FRIED WORMS, I'd love to have seen what Norman would have done with the material.

Yeah, yeah, I know...it's the editor, not the writer, who picks the illustrator of a book...but do you really think any editor would have turned down the opportunity to work with Norman Rockwell?

And just think, if Norman had illustrated this book, the Detroit Insitute of Arts might right now be exhibiting a painting of Rockwell's distinctive, comically all-American boys contemplating a plate of squriming worms.
Posted by Peter D. Sieruta at 9:58 AM

I have seen several Norman Rockwell exhibits and find them delightful! My mother had posters hanging in our den of the Four Freedoms.

According to the MAZZA Museum in Findlay, those who draw pictures for children's books are artists not illustrators. They are quite emphatic about it.

Always great to read your thoughts. Thanks.

Don't forget his book, "Willie was Different." Unless you are excluding that for some reason?

We saw a wonderful Rockwell exhibit a few years ago. You'll enjoy it!

It's funny the ridiculous arguments people will make to prevent Rockwell and Wyeth from being considered artists.

Thus the Treasure Island paintings aren't art, but a landscape Wyeth knocked out while on vacation is.

Fascinating. Thanks for sharing!

I just saw a Norman Rockwell ABC book which got donated for the library sale last week.
Jeanne K.

Actually, I got that wrong. It is a counting book, not an alphabet book!
Jeanne K.

I can see that Norman Rockwell of the fried worms dilemma in my head right now...