The other day I was in line at the bagel shop and thought I saw a girl I went to high school with. She had the same stringy blonde hair, the same wire-rimmed glasses, the same nervous, typically-teenage self-conciousness. She looked about seventeen or eighteen years old.

Then I remembered...oh yeah...I graduated from high school over thirty years ago. It couldn't be the same girl. The classmate I remembered would now be about fifty!

Later that week I saw an obituary for my junior high math teacher. I was stunned to learn she was 87 years old. In my mind she was still middle-aged, still standing in front of a classroom full of kids, holding the same battered blue algebra book and dodging spitballs.

Although I'm quite aware that I am growing older every day, I somehow expect everyone else to remain the same. I don't know if this is a particular quirk of mine, or if other people feel this way as well. Does anyone else ever imagine visiting their old schools and finding the same teachers still waiting "right where you left them"? Or returning to a former neighborhood and finding the same old friends still playing baseball in the street?

Of course the only place where people can remain "forever young" is in books. Readers have been fascinated by Peter Pan, the boy who won't grow up, for over a century. And Natalie Babbitt's 1975 novel TUCK EVERLASTING is regarded by many as one of the greatest children's books of the twentieth century. 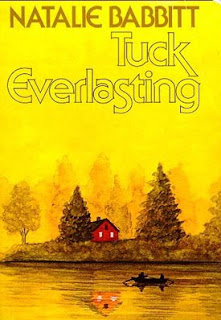 For decades readers have debated the choice Winnie makes at the end of this novel -- to drink from the spring that will grant her everlasting youth and immortality -- or to continue with the impermanent life we have all been given. Ms. Babbitt has said that many young readers are upset that Winnie chooses to remain mortal although "most of them do change their minds about it later on." The author recalls, "A young girl wrote to tell me that she was so very disappointed with the ending and I wrote back to her to say that that was okay -- there is no right or wrong way to feel. Seven years later, the same girl wrote to me and said that she had changed her mind, and that she realized the book had ended the way it was supposed to. I always tell kids about that because that’s beautiful." Beautiful? I think it's downright amazing that this girl was still pondering the novel's central dilemma seven years after first reading the book -- and felt so strongly about it that she was compelled to write the author again. If that's not a sign of a good book, I don't know what is.

Lois Duncan also tackled the subject of immortality in the guise of a suspense novel. Set in steamy Louisiana plantation country, LOCKED IN TIME (1985) concerns a teenage girl who realizes her new stepfamily is cursed (cursed, not blessed) with eternal youth. Ms. Duncan said, 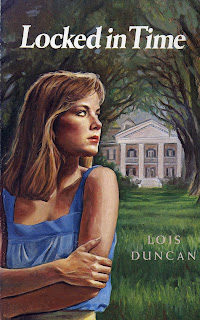 "The idea for LOCKED IN TIME...originated when the youngest of my five children turned thirteen. Overnight my darling Kait changed from an adorable cherub who thought her mother was perfect into a hostile teenager who thought everything about Mother, from her hairstyle to her 'dumb jokes' was 'utterly gross.' My husband tried to comfort me by saying, 'It's just a phase all adolescents go through. Our other kids outgrew it and so will Kait.' The Mother part of me knew that he was right. The Writer part of me whispered 'What if she doesn't?' What if a mother and her adolescent daughter were locked in time? What would it be like to live for all eternity with a hostile, rebellious thirteen-year-old who never outgrew her training bra, who never got rid of her acne...? Once I'd gotten that far in my thinking, I was racing for the typewriter." The author concluded that the idea of being "stuck forever...unable to change and grow" was a "horrible concept."

I suppose it is. Who'd want to be thirteen forever? Or fifteen? Or eighteen? And though I like to picture my former teachers eternally erasing blackboards at my old schools, isn't being trapped in a junior high classroom ducking spitballs for all eternity truly a fate worse than death?

...Actually, when I think about it, there is one place we can revisit where the people never age and never change -- and that's in old children's books. And I'm not just talking about the immortal kids in TUCK EVERLASTING or LOCKED IN TIME. I'm talking about every children's book. No matter how old we get, Claudia and Jamie Kincaid are still going to be twelve and nine. Junior Brown will always be three hundred pounds. Chester Cricket will never get zapped by Raid. Of course all these characters do grow and change within the parameters of their storylines. And our reactions to them may differ when we read these books at different times in our lives. But there is a certain comfort in knowing that, no matter how many years pass, and no matter how much we ourselves grow and change, these characters will be waiting for our return, forever young.
Posted by Peter D. Sieruta at 1:32 PM

I never read that Lois Duncan book, but you're so right about Tuck Everlasting. That book is just wonderful. Everyone should read it at least once!

Believe it or not, if I returned to my school, I would find my fourth, fifth, and sixth grade teachers along with several high school teachers still plugging away. I graduated almost 25 years ago.

Refreshing to hear about books written about non-vampiric immortality...

...but I agree. No matter what age I am, I still get the same images from Laura Ingalls Wilder or Natalie Savage Carlson. Curious how my own characters in my own (non-published) fiction have changed in the intervening years since I created them. They don't stay static with time--perhaps because their creator changes as well. =)

Peter; No matter what age I am my children still think I'm 40, or should be, forgetting they are in their forties...love your blog.