Lemony Snicket's words for "Beatrice" at the beginning of "A Series of Unfortunate Events" comprise one of the most startling book dedications in recent memory.

And it didn't end there.

Subsequent volumes contained the following provocative/scary/funny dedications to the lovely but ill-fated Beatrice:

For Beatrice. My love for you shall live forever. You, however, did not.

For Beatrice. I would much prefer it if you were alive and well.

To Beatrice. My love flew like a butterfly / Until death swooped down like a bat / As the poet Emma Montana said: / "That's the end of that."

For Beatrice. You will always be in my heart, in my mind, and in your grave.

For Beatrice. When we met, my life began. Soon after, yours ended.

For Beatrice. When we were together I felt breathless. Now you are.

For Beatrice. Our love broke my heart, and stopped yours.

For Beatrice. When we first met, I was lonely, and you were pretty. Now I am pretty lonely.

For Beatrice. Dead women tell no tales. Sad men write them down.

For Beatrice. No one could extinguish my love. Or your house.

For Beatrice. I cherished, you perished. The world's been nightmarished.

The story of Beatrice is intertwined with the tale of the Baudelaire children in the Snicket books but, to be perfectly honest, I'm not exactly sure how she's related to the kids or how it's all resolved. Tired of reading about all that misfortune, I gave up on the series well before it reached the double-digits and moved on to lighter, more uplifting fare such as BEFORE I DIE (leukemia), WINTERGIRLS (anorexia, bulimia, cutting) and OLD YELLER (yes, the dog dies, but it doesn't take him thirteen volumes to do so.) But I do love those Lemony Snicket dedications.

And they got me thinking about other intriguing dedications from children's books. Here is a sampling of amusing, perplexing, touching, and sad ones I've discovered. 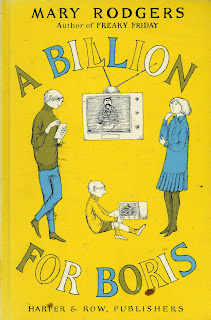 Mary Rodgers' hilarious A BILLION FOR BORIS begins: This book is dedicated to my small sons, Adam and Alec, without whom I was finally able to finish it. (One of those sons, Adam Guettel, grew up to become a theatre composer who wrote one of my favorites, FLOYD COLLINS, and won a Tony for A LIGHT IN THE PIAZZA. It must be in the genes. Mary Rodgers wrote the music for ONCE UPON A MATTRESS and her father was Richard Rodgers of Rogers and Hammerstein.)

David Shannon dedicated his picture book NO, DAVID! To Martha, my mother, who kept in line then, and to Heidi, my wife, who keeps in line now. 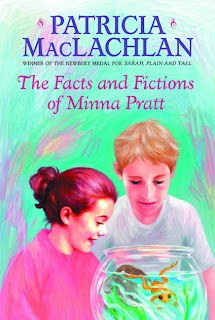 Patricia MacLachlan pays tribute to a friend and fellow children's book writer in this dedication for THE FACTS AND FICTIONS OF MINNA PRATT: Once I told a class of Natalie Babbitt's
that she had inspired and encouraged me as a writer, as a friend. "Why, then," said Natalie crisply (joking, of course) "haven't you ever dedicated a book to me?" Well, this is it, with deep affection. To Nat from Pat.

The dedications of Kathleen Jeffrie Johnson's young adult novels often leave me scratching my head. They are as mysterious and eccentric as her books. THE PARALLEL UNIVERSE OF LIARS is dedicated:

How can we light our way into the dark
If not by human love?

For those who have helped me light my way

DUMB LOVE is dedicated for lu-u-uvers

and her shape-shifting story A FAST AND BRUTAL WING carries this dedication:

seedcake for my rainbow actor,
my handed crow.
always. 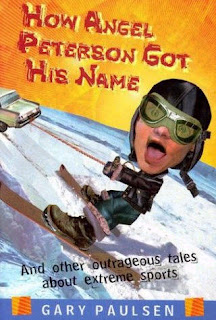 In HOW ANGEL PETERSON GOT HIS NAME, Gary Paulsen describes some of the more foolhardy adventures he and his friends experienced as kids. Like trying to set a speed record on waxed skates. Like going over a waterfall in a barrel. Like...well, I'm not even going to say what they did with the electric fence...except to say it caused them to "walk funny." No wonder the first page says This book is dedicated to all boys in their thirteenth year; the miracle is that we live through it.

Robb White dedicated his 1979 adventure novel FIRE STORM to his son with these words: I have dedicated books to aunts, wives, in-laws, friends, and lovers; to one dog and two myths; so this book is for ROBB WHITE III.

...If I were III, I'd be wondering what took II so long to get around to it.

My admiration for Louis Sachar's HOLES has no bounds, but I can't say I'm a fan of his earlier work. The dedication of this 1983 book reads SOMEDAY ANGELINE, a good story with lots of funny jokes, is dedicated to everyone who can tell whether a book is any good -- by smelling it. (I guess that doesn't include me. I sniffed this book and it actually smelled just fine. ...Then I read it.)

Daniel Pinkwater can usually be counted on for providing some funny book dedications:

ALVIN MENDELSOHN, THE BOY FROM MARS is dedicated For Jill Miriam, my Martian sweetie.

THE LAST GURU : To my brothers and sisters -- They know who they are.

BAD BEARS IN THE BIG CITY : For Larry. Where are you??? 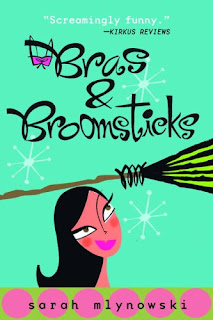 In the dedication of her young-adult novel BRAS & BROOMSTICKS, Sarah Mlynowski shows that good-natured sibling rivalry still exists in her family: For Aviva, my baby sister. And yes, she'll always be my baby sister, even when she's seventy-two and I'm seventy-nine. (Fine, Aviva, seventy-eight and a half.)

I've always been touched by WINNIE-THE-POOH's dedication from A.A. Milne to his wife Daphne: 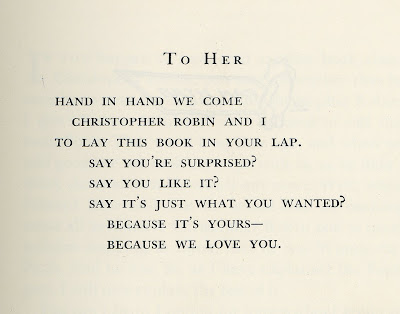 And the saddest dedication I've ever seen is in COWBOY DREAMS by Dayal Kaur Khalsa, the author-illustrator's reminiscence of growing up as a cowboy-lovin' little girl who called her bicycle "Old Paint" and wanted to convert the family garage into a stable=. At the time she wrote the book, Ms. Khalsa was dying of cancer. 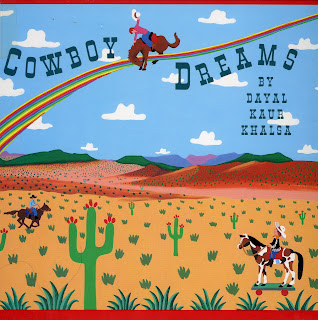 Published posthumously, it carries this dedication:

To All My Old, Old Saddle Pals,
There's hardly a trail we didn't roam,
But the sun is setting in the West,
And it's time for me to head on home.

Finally, there's Henry Gregor Felsen, who wrote some odd-but-interesting dedications throughout the years. TO MY SON IN UNIFORM is dedicated To the United States Marine Corps which was always treating me better or worse than I deserved. 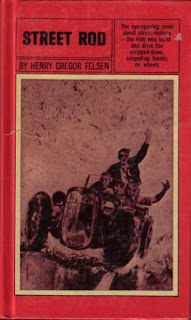 Actually, he was probably glad to get his son "in uniform", as eight years earlier he dedicated his novel CRASH CLUB with this somewhat worried dedication: To my teen-age son and his teen-age friends. Black leather books, blue denims, turned-up jacket collars, and all... He dedicates HOT ROD To my fellow members of the Iowa Timing Association but can't resist adding a cautionary note saying that he's mailing in his manuscript on Friday afternoon, January 16, 1953, but by the time it arrives in New York on Monday morning "a grim percentage calls for two teenagers to die in auto accidents in Iowa, for half a dozen to be injured, and a score to be arrested." He adds that by the time the galley proofs are mailed back in three months "another fifty-one boys and girls under twenty-one are scheduled to die by the automobile in Iowa, 150 to be injured, and several hundred to be arrested." He goes on...and the numbers keep getting higher...but what's the point of me repeating them. All I can think about are all the teenagers who picked up this book back in the fifties hoping for an exciting, engine-roaring, tire-squealing hot rod story only to learn that some of them are "scheduled" to die. What a killjoy.

Does anyone else have some favorite dedications to add to this list?
Posted by Peter D. Sieruta at 10:39 AM

Just spent waaaay too long at your blog! What absolute fun. Many of the books you mention are still on the shelves in my middle school library. If you ever want to know about teen (girl) fiction from the 1950s and 60s, let me know. That's what I collect, along with etiquette manuals from the same time period. Thanks for a fun start to my morning.

One of the best and most memorable dedications I've come across in recent years is from John Green's An Abundance of Katherines. The protagonist of that novel is obsessed with anagrams, and so for the dedication Green created a poem that includes some dozen or more anagrams of his wife's name, all listing her various virtues. I wish I had a copy so I could type it up here; go find it if you can, it's really clever!

I've always been partial to the dedication in Russell Hoban's Bread and Jam for Frances:
"for Julia, who likes to practice with a string bean when she can."

Funny, I was asked a question about dedications, did a little research, and ended up here -- a place I often begin!

I remember Johanna Hurwitz dedicated a book (and no, I can't remember which): "To Robert Redford, he knows why."

Love your Blog!I copied this dedication many years ago & can no longer remember which book it came from.Hoping you, or one of your avid followers,can help...
The child's world is a world of symbols,shapes & sizes until that dismal day when it is taught to put a label on each & every thing it has felt,touched & smelt & forced to shrink it by name.
The child's world is the poet's world,where dimensions differ only according to feeling,not fact;that place of the 4th dimension that eludes all but painters,poets, lunatics & the players of musical instruments,& it even eludes those at times.That is why they remain children,eternally committed to chasing after it,clinging to the tatters of those clouds of glory with which we are all born & which only rationalization can rip off.
Definitions are dull & delineations even duller - Blake's Tiger would never have burnt bright in the forests of an ADULT'S night,but simply have gone out like a light,while the adult died of fright.
But beautiful things are not fearful in the innocent world, because there, one has curiosity instead of terror & a suppleness of mind that adjusts itself to the wonder of the unexpected as easily as the pupil of the eye to the fluctuations of light & dark.
Here then is a little book that is the right way up.A glimpse of a world wherein there is so much time & limitless space that no one has to confine or categorize out of meanness of heart,for fear that there won't be enough beauty or enough truth to go around unless you frighten others away.