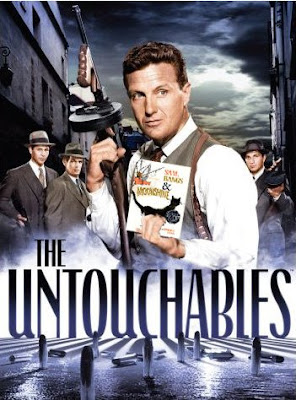 Yeah, it was the age of illegal moonshine. Rum running. Bootlegging. Gunfire in the streets. They called it Prohibition.

His name was Eliot Ness and he worked for Uncle Sam. As a member of Chicago's Bureau of Prohibition, he assembled a crack team of T-Men who smashed stills and seized speakeasies all across the Windy City. Immune to corruption, they were known far and wide as "The Untouchables." 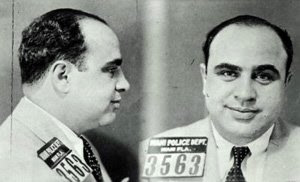 Their biggest success? Bringing down Alphonse Gabriel Capone. Yeah, Scarface himself. Al Capone -- orchestrator of the St. Valentine's Day Massacre and Public Enemy Number One. A not-so-nice guy. Destroying Capone's criminal empire made Eliot Ness a legendary figure. He was featured in books and magazines. Robert Stack played him on THE UNTOUCHABLES television series back in the late fifties, early sixties. Kevin Costner portrayed him on the silver screen. But here at Collecting Children's Books we celebrate Mr. Ness for the round-about role he had in changing the life and career of an aspiring illustrator.

You might even say that Eliot Ness had something to do with a certain book winning the Caldecott Medal.

The story begins a few years after the end of Prohibition. By then Capone had a cozy new home at Alcatraz and Eliot was sittin' pretty as the Director for Public Safety in Cleveland, Ohio. Then he met a dame named Evaline, though almost everyone called her "Eve." Born in Ohio, raised in Michigan, it seemed like Eve was always running away from something. First she trained to become a librarian in Chautauqua, New York. Didn't work out. Next came a year at Ball State Teachers College in Muncie, Indiana. Didn't work out. What she really wanted to do was become an artist, so she attended the Chicago Art Institute and found work drawing fashion advertisements. When her long-time beau, away at med school for many years, finally showed up with plans for a new life in a small Dakota mining town, Eve ran away again -- impulsively marrying a Scottish artist, though she soon realized, "Mac should have been my brother...not my husband."

One fateful day in June, Eve boarded a train for Canada to visit friends and that's when she met Eliot Ness. She later recalled, "Eliot and I talked a lot...looked at each other at the same time a lot...laughed a lot and kissed a lot when I got off the train. He was married. So was I. I thought that I would never see him again. I was wrong. Eliot had many talents but his 'detective' skill was the one I liked best. Two years later he 'tracked' me down in New York City."

And soon they were married, living first in Cleveland and then, after the war began, moving to Washington, D.C. where Eliot Ness was charged with trying to prevent 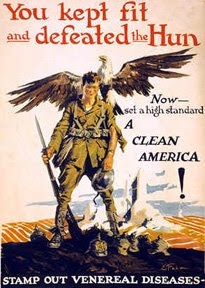 the spread of venereal disease in the military. It was an ugly job, but someone had to do it. Meanwhile Eve joined the American Women's Volunteer Services and, wearing a cute blue uniform with a matching hat, chauffeured military brass around the nation's capital. But when Eliot learned that most of Eve's work involved driving generals to cocktail parties and then sitting outside in the car waiting to drive them home again, he strongly suggested she quit. "Go to art school," he urged. "If Renoir could paint through two wars, you are allowed to paint through one." She was soon enrolled in classes at the Corcoran Gallery of Art where, under the tutelage of a special teacher, "The Walls of Jericho came down...the Red Sea parted...manna fell from Heaven!" Over the next two years, Eve won many prizes for her artwork and "my passion for painting replaced everything in my life. I found everything dull except working in front of my easel or looking at paintings in the Corcoran Gallery or the National Museum or the Frick Collection. And Eliot found me dull. He said I was no longer the woman he married. He was right. I wasn't -- and what's more, I never wanted to be that woman again."

Many years later, Eve described that period in her life in one succinct sentence: "The End...end of World War II...end of Eliot and me together."

But of course it wasn't the end. In fact, it was just the beginning. After divorcing Eliot, Mrs. Ness moved to New York where she began doing magazine illustrations...which lead to book illustrations -- first for books by other authors (THE BRIDGE by Charlton Ogburn, THE SHERWOOD RING by Elizabeth Marie Pope, as well as titles by Sorche Nic Leodhas, Julia Cunningham and Lloyd Alexander) and eventually to books she both wrote and illustrated herself, including A GIFT FOR SULA SULA, EXACTLY ALIKE, and her most famous book, SAM, BANGS & MOONSHINE. 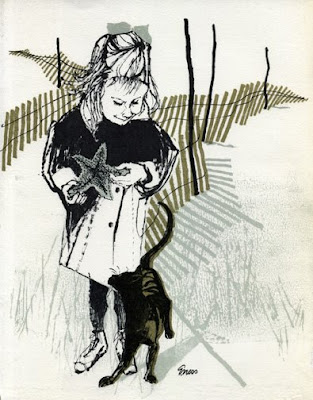 To most of the public, the name Eliot Ness conjures up images of a machine-gun toting uncorruptable -- and "untouchable" -- law enforcement powerhouse, but he was also the man who, by encouraging his wife to attend art school, jumpstarted the career of well-regarded children's book creator Evaline Ness and, one might say, ultimately led to the creation of 1967's Caldecott winner SAM, BANGS & MOONSHINE.
Posted by Peter D. Sieruta at 9:59 AM

Okay. That was brilliant. From the title to the text to the conclusion. I will now set about poking at you mercilessly until you collect such posts as these into a scholarly book about the lives and times of various children's authors, illustrators, editors, and advocates. I am not kidding about this. Write book.

I agree with, Fuse. Hopefully there is still a publisher out there though. They are dropping like flies.

you DO need to get these published. how about as a hardbound comic book? i could see this story told in panels. you could have different children's book authors or grpahic novelists illustrate each biography, in different styles depending on the subject's era and adventures.

I'm glad Fuse #8 posted a link to this. It's fantastic! Great work revealing the story at a perfect pace. It's amazing the things most of us don't know about supposedly well known people.

I havent any word to understand this post.....Really i'm impressed from this post....the person who create this put up it was an excellent human..thanks for shared this with us.

Hey!, Very interesting angle, we had been talking about the identical factor at work and located your site very stimulating. So simply needed to com-ment a huge thanks for all of your effort. Please keep up the great work your doing!

how to lower high cholesterol said...

I was wondering what is up with that weird gravatar??? I know 5am is early and I’m not looking my best at that hour, but I hope I don’t appear to be this! I might however make that face if I’m asked to do a hundred pushups. lol