Looking Over the President's Shoulder 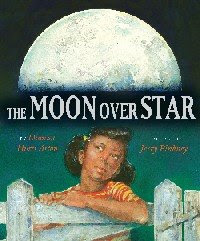 According to reports, the president's pick sparked public interest and libraries soon noted an increased demand for THE MOON OVER STAR. I have to admit I pored over the photographs of President and Mrs. Obama at the library, seeing if I could identify any of the children's books from the spines on the shelves behind them. I think I saw Funke, I think I saw Gantos. I'm pretty sure I saw Scott O'Dell's SING DOWN THE MOON and ISLAND OF THE BLUE DOLPHINS side-by-side. Oh, and right over the president's shoulder, the only book facing out, I definitely saw THE CROSSROADS by Chris Grabenstein. 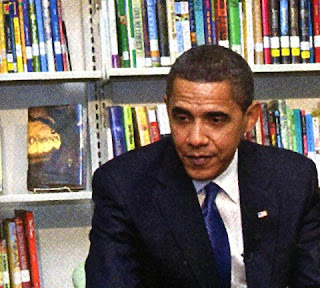 I found this both historically symbolic, since Obama is now leading a country which seems to be at a crossroads, as well as, just personally way cool because, hey, I read that book! 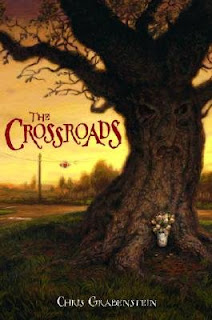 A few days after her trip to the Capital City Charter School, Michelle Obama visited Mary's Center, a Washington community health organization, where she read aloud Bill Martin's BROWN BEAR, BROWN BEAR, WHAT DO YOU SEE?

Saying that she'd shared this book "a million times" with her own daughters, Mrs. Obama proceeded to recite the story before an audience of preschoolers -- often without having to consult the text. Reading is important to the Obama family ("Harry Potter is huge in our house," Mrs. Obama once said, adding that her husband had read the entire series aloud to their daughters) and it's great to see the new first family continuing the presidential tradition of supporting children's books.

Lynda Johnson Robb, former chairman of Reading is Fundamental and president of the National Home Library Foundation, used to solicit signed children's books for the White House Library during the presidency of her father Lyndon Johnson.

President Jimmy Carter's daughter, Amy, often sat reading a book at official state dinners. In a 1978 interview, she listed ALVIN FERNALD, SUPERWEASEL by Clifford B. Hicks as her favorite, though when the White House hosted a "Reading is Fun Day" event the following year, she released a balloon with a tag containing her name, address, and the title of her favorite book, TREASURE ISLAND.

The children's title most associated with the recent Bush presidency will probably always, tragically, be "My Pet Goat," although it's not a stand-alone children's book but, instead, a story -- actually titled "THE Pet Goat" -- in a grade school primer. On a happier note, Laura Bush, a former children's librarian, invited several authors of books for young people -- including Christopher Paul Curtis, Susan Jeffers, and Angela Shelf Medearis -- to an inauguration event in 2001, and even presented a copy of our 1929 Newbery winner, THE TRUMPETER OF KRAKOW by Eric P. Kelly, to Polish first lady Jolanta Kwaśniewska during a state visit. Reportedly, Mrs. Kwasniewska opened the book and then gave Mrs. Bush a kiss. I could have kissed her too, for bringing this great, but often-neglected, novel back into the media spotlight.

Granted, not everyone is quite as obsessive about the topic of children's books as I am. Not everyone cheers when they hear that two presidents' wives from two different countries appreciate THE TRUMPETER OF KRAKOW. Not everyone gets out a magnifying glass to see what books are on the shelf behind President Obama's right shoulder. But even the most casual news-watcher sees the president and first lady in libraries, surrounded by books -- and that's a good thing. Some have heard the titles THE MOON OVER STAR or BROWN BEAR, BROWN BEAR, WHAT DO YOU SEE? for the first time and may now go to the library or bookstore and get these stories for themselves. That's good too. When images of famous people enjoying children's books are floated around out there, like ballons in the air, who knows what kind of influence they may eventually have? 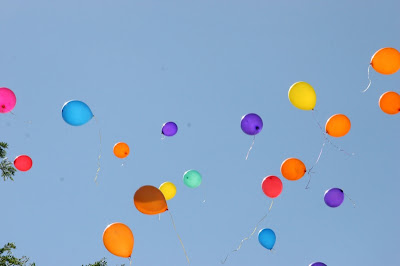 And speaking of balloons...I'd like to think that, by some quirk of fate, thirty years ago a balloon went up into the air, caught a particularly ascendant jet stream, and has been floating around in the stratosphere for decades...over Atlantic and Pacific, over the Alps and Himalayas. Maybe someday it will finally touch down in a backyard where a kid will puzzle over the faded writing on the tag, ride his bike over to the library for the first time to borrow a copy of TREASURE ISLAND, and then write back to a girl named AMY C. at -- what's that address? 1600 what? -- to tell her it's now his favorite book too.
Posted by Peter D. Sieruta at 9:58 AM

I had my face up against the screen when I saw the Obamas reading a picture book on the news. I couldn't see the title, and figured that was the end of the story. It's great to find that there were others out there who were as interested as I was. Thanks for the post.