Welcome to Sunday Brunch at Collecting Children’s Books. Today’s random assortment of fact and opinion talks about books that were written as Valentine presents, reviews the new Jennifer L. Holm novel, and notes an increase in reading among young people.

Forget about hearts and flowers. The best thing about Valentine’s Day is the candy.

In honor of the day, here are some timely dustjackets from a few recent young adult novels. 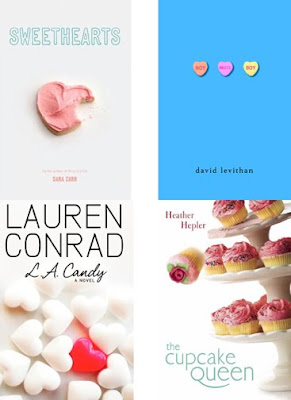 
EVEN BETTER THAN A BOX OF CANDY?

One of the novels above, BOY MEETS BOY, began as a Valentine’s gift. Actually, several of the author’s books started off as Valentine’s presents.

Back when he was in high school, David Levithan spent a boring class period looking for love...in a physics textbook. He gave the resulting short story, “A Romantic Inclination,” to several friends as a Valentine’s present, beginning an annual tradition that continues to this day.

BOY MEETS BOY grew out of a Valentine’s story, as did several of the tales in HOW THEY MET AND OTHER STORIES.

Coming in April is a collaboration between Mr. Levithan and John Green, author WAITING FOR ALASKA and PAPER TOWNS. 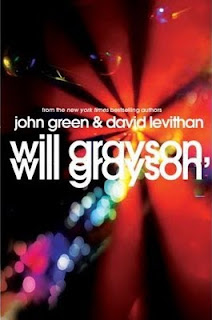 I may be the only person out there who buys advance reading copies of forthcoming books because:

Actually, I did get the following book free -- and I’m so glad I did. A friend gave me an ARC a couple weeks ago and this past Wednesday, off work for a snow day, I spent the morning “in Florida” with this novel.

In TURTLE IN PARADISE, Jennifer L. Holm again creates a story based on her own family history (after OUR OWN AMELIA JANE and PENNY FROM HEAVEN), this time inspired by a great-grandmother who grew up in the Florida Keys at the end of the nineteenth century. Holm transfers her story to the Depression era, as prickly eleven-year-old Turtle is sent to live with relatives in 1935 Key West. As she adjusts to her new surroundings, Turtle hangs out with an all-boy gang of babysitters called the Diaper Gang, meets relatives she never knew existed, such as her stroke-afflicted grandmother, and searches for pirate treasure during the Keys’ perilous Labor Day Hurricane. 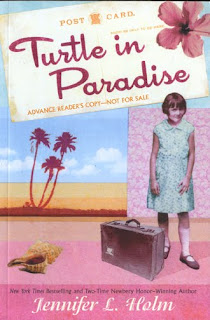 The treasure-hunting plot strains credibility, but Holm caps it with a realistic twist that results in a conclusion that Turtle admits “may not be a Hollywood ending,” yet still satisfies. Written in smooth, fast-paced prose, TURTLE IN PARADISE is especially strong in capturing an exotic location -- complete with sponge-fishing, conch-chowder, and “Papa” Hemingway down at the local cafe -- and a long-ago time of Terry and the Pirates in the funnies and Shirley Temple on the movie screen. An Author’s Note sets event in perspective and a bibliography and list of websites provide sources of additional information for readers captivated by this extremely likable novel.

The protagonist of TURTLE IN PARADISE got her name due to her “hard shell,” but she’s not the first girl named Turtle in fiction. There’s also the heroine of Ellen Raskin’s Newbery-winning THE WESTING GAME, as well as a character in Barbara Kingsolver’s novel THE BEAN TREES, which was published for adults, but appears frequently on high school reading lists.

In last week’s blog I mentioned that popular teen marriage book of the seventies, MR. AND MRS. BO JO JONES by Ann Head, and several people wrote to comment, making me even more anxious to read this novel. Wendy calls it “a truly beautiful book.” Another correspondent told the following tale. (I’m changing the names to protect the innocent. Especially the kid with the reactionary mother.)

I took our copy from the shelf at the library but, unfortunately, it didn’t fall open to any particular page.

Guess I’ll have to read the whole thing.


WHEN YOU REACH ME...BRING A FLASHLIGHT

I got another fun note from a bookseller this week. She talked about attending a recent bookstore signing for Rebecca Stead and said:

She showed up at the signing to a darkened bookstore. The store had lost its electricity about 30 minutes earlier. The electricity was out for 90 minutes. A bookseller held a flashlight up while she read to the audience. The store had a few lights that worked on a generator and she could see someone when their hand went up to ask a question. The electricity came back on around the time that it was time to sign the books.

About 50-75 people showed up during a storm forecast for that night and with no electricity. Rebecca Stead said that at least it made it an interesting signing. The store and Rebecca Stead were joking that it was like a sleep over.

What was really interesting was the audience. There were many librarians which made sense but there were also quite a few mothers and daughters and it was delightful to see them enjoy a book and an author together.

Great, but where were the fathers and sons? WHEN YOU REACH ME seems to be one of those books which, despite its female narrator, appeals equally to boys.

Wish I’d been there -- with candles and a flashlight!

A new study from the Kaiser Family Foundation reports that reading is on the increase among young people.

According to the report, “average daily media use” by kids between eight an eighteen was “seven hour and 38 minutes in 2009, up from six hours and 21 minutes in 2004.”

I’m glad the number of minutes is going up.

I’m glad kids are reading books at all!

....Though if the number is only increasing by two minutes a day every five years, we’ll be well into the twenty-second century before kids read books an hour a day.

Oh well, we can only dream.

Thanks for visiting Collecting Children’s Books. Hope you’ll be back. Have a Happy Valentine’s Day. ...Oh, and speaking of sweet treats AND turtles, my current favorite treat is called a Turtle Sundae. It contains vanilla ice cream with both hot fudge and hot caramel drizzled on top, along with a sprinkling of pecans. They call it a Turtle Sundae because the flavor is reminiscent of the candy known as “Turtles.” I’ve noticed recently that some ice cream shops have changed the name from “Turtle Sundae” to “Pecan Cluster Sundae.” I thought maybe the Turtle candy company had complained about trademark infringement, but I asked the counter girl and she said they changed the name because it "confused people."

Oh come on, did anyone REALLY think they were ordering a sundae made from actual turtles? 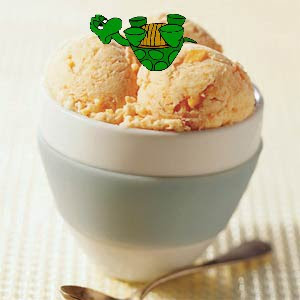 Though, come to think of it, both pecans and turtles do come in shells....
Posted by Peter D. Sieruta at 3:43 PM

Turtle In Paradise piqued my interest.

I saw you have acquired a copy of The Wishing Star by Norma Johnston, which is hard to find. Doubtless you noticed she dedicated it to Maud Hart Lovelace. Norma had written to Maud when she was aspiring. This novel, her first, is about a girl whose mother has drinking problems, so was hard to get published at that time. Norma remembered the encouragement Maud provided to her, and I recall being thrilled when I found The Wishing Star at the same library where I read all of Betsy-Tacy.

I understand, sort of, the temptation to keep up by buying ARCs, but I couldn't bear to pay someone for what they got for free. The only place I've seen ARCs for sale is on eBay and at Half-Price Books (the one in my neighborhood has a LOT of ARCs in the kids/teen books). My husband has published one book, and he was amused, but I was annoyed, when a friend reported finding an ARC for sale at Half-Price Books.