She was a fascinating person.

Due to her job, she had lived all over the world. She was intellectually curious -- teaching herself to read several foreign languages and to play intricate classical pieces on the piano. All her friends and family would attest that she was generous to a fault.

Then, a few years ago, she suddenly began to hear voices.

First she claimed they were sending her messages through the television and radio, but later said "the voices" were transmitted directly into her head. They also tormented her by shooting painful "electronic rays" all over her body, twenty-four hours a day, seven days a week. She said she was a victim of a government "mind control" experiment.

Her behavior became increasingly aberrant. At one point she fled the country without telling anyone, in hopes that she'd leave "the voices" behind. She returned home several days later, sadly admitting that the voices had followed her. She took to visiting lawyers' offices, trying to enlist their help in fighting the government; they'd usher her out, barely suppressing their smiles. It was especially bad for those of us who knew her. She would talk for hours about her plight. She was so convincing that, after a while, you'd think, "Well...she did work for the government all her life...could it possibly be true...?" But then you'd shake your head and say, "Of course it's not true!" When she saw your disbelief, she'd say in disgust, "Someday you'll find out the truth. It may not be in my lifetime, but someday the truth will come out -- and then you'll be sorry you never believed me!"

After she died, we found hundreds of legal pads containing rough drafts of demented letters she'd written to every member of the House of Representatives, the Senate, and even the President of the United States, demanding that they look into the "mind control experiments" that had made the last two decades of her life a living nightmare.

Of course she wasn't the only one who suffered from this delusion. I've come to realize it's common. Someone once came into the library where I worked and asked for information on cathode ray tubes. As I led him to the science stacks, I stuttered-stepped as he added, "The government is using cathode rays to monitor my behavior." If you listen to late night radio, you'll often hear people phone in and say they're being persecuted by the government, or under the control of the CIA, or hearing voices in their heads. These calls are usually quickly scuttled by the host.

I've been thinking about my old acquaintance -- as well as all the other people like her -- this week, after hearing about a woman named Candy Jones.

Candy Jones (1925-1990) was a well-known model throughout the forties and fifties. In 1972, she married a New York radio host named Long John Nebel. Long John's overnight show focused on the paranormal and conspiracy theories, much like his latter-day counterparts Art Bell and George Noory do today. Upon getting married, Candy joined Long John's show as a co-host and began to enthrall his audience with her own story of being a "mind control" victim. Her tale -- patched together from both partial memories and hypnotic regressions -- is full of intrigue, torture, and mystery. Some called it a hoax, but author Donald Bain took it seriously enough to write a book about it (THE CONTROL OF CANDY JONES, 1976) and Carla Emery's 1998 volume, SECRET, DON'T TELL : THE ENCYCLOPEDIA OF HYPNOTISM, devotes many pages to Candy's story.

Of course when I learned about Candy Jones, I immediately thought of the Cathode Ray Guy in the Library and my tormented acquaintance who wasted her last years writing hundreds of letters to the government about "the voices."

You're probably wondering what any of this has to do with children's books.

Well, when I was researching Candy Jones this week, I discovered that during the sixties, she 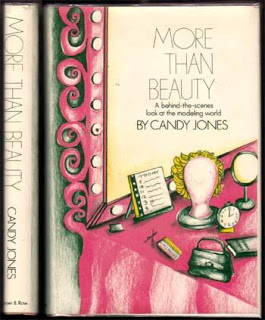 wrote several young adult books about modeling and fashion. Published by Harper, her YA titles included LET'S MAKE FACES, JUST FOR TEENS, and MORE THAN BEAUTY. I've never seen any of these books, but I'm especially intrigued by her 1962 volume TIME TO GROW UP : AN AFFECTIONATE GUIDE FOR YOUNG LADIES FROM TEN TO SIXTEEN, which contains advice on etiquette and comportment for girls.

I guess I'd like to read these books just to see if any of her later "strangeness" lurks subtly within the sentences or creeps around the edge of the pages.

One thing I learned from having a personal relationship with someone who had a very similar delusion is that it eventually colors all your thoughts and memories of that person. I remember the years before my acquaintance became strange and obsessed. I remember her sending letters from exotic places such as Turkey and the Philippines. I remember books that she shared with me. I remember things she'd say and do. But now when I remember those things, I am looking for signs of incipient strangeness in her words and actions. Surely it had to be there all along.

Because I hate to think of the alternative: that smart, kind people like my personal acquaintance or worldly authors such as Candy Jones could live productive, fulfilling lives for many years and then -- snap! -- suddenly become obsessed with a batty belief that torments them for the rest of their years.

I don't want to believe that could happen.

The reported incidences of stalking, by government or other groups, has been increasing exponentially with the technological advancement of surveillance equipment.
Unless you've seen it in action, yes, it's hard to believe. But when you're a first-hand witness or "victim", it's imperative to develop the mind-set to fight the intimidation.
There are Yahoo groups which have good links and information for those who are, actually, experiencing the stalking phenomenon. It's so close to the mind-control phenomenon, that whether that's true or false, it's nice to know that support groups exist.

Sounds like Brice Taylor (Sue Ford), but at least she was smart enough to write publishers instead of Congress, turning her ramblings into a cash cow