I used to know this girl who had an October birthday, just like me.

Starting around October first, she’d begin attending a series of parties, dinners, and other special events -- all celebrating her upcoming birthday. Every morning she’d arrive at the office with tales of the previous evening’s festivities -- a bowling party with former co-workers, drinks with an old college chum, a spaghetti dinner with her parents and sister -- and show off the gifts she’d received. Her birthday fell in the middle of the month, just like mine, but she didn’t stop celebrating then. The fun continued with midnight hayrides, an evening at a dance club, and a surprise birthday party given by neighbors. Around Halloween I finally said to her, “You had another party last night? I thought your birthday was WEEKS ago?”

“It was,” she responded. “But I like to keep the celebration going for the whole month.”

Back then, I probably rolled my eyes. But now I can empathize. Since I was kind of cheated out of my “Big Birthday” (you know, the kind where you change BOTH digits) last week due to car problems, I’ve been trying to continue the celebration all week long. In fact, because I spent last Monday -- my real birthday -- getting up at dawn, having my car towed, and negotiating the purchase of a new vehicle, I’ve decided to take tomorrow off work and pretend that I’m getting an extra birthday this year.

Not that October 13 didn’t have its fun moments. It was nice to get a brand new car (a Ford Focus -- gold because it was my golden annivesary of being alive), but I’m not sure one can call it a “present” since I’m going to being making payments on it for the next how-many birthdays. But the rest of the day was nice and included cards and e-mails from friends, lunch at my favorite Chinese restaurant with family, and some great presents. (I’ll share the book-related gifts later in this blog.) And of course I still had that wonderful birthday cake (FIVE layers!) featured in last Sunday’s blog entry. Unfortunately, only the crumbs remain.

I only wish AARP didn’t keep bugging me.

Ever since my birthday they have contacted me not once, not twice, but THREE TIMES, just to remind me how old I’m getting.

I’m just going to ignore them and keep on blogging. Today’s blog contains the usual mix of random facts and opinions on children’s books old and new.

This fall’s hottest title for young people has to be THE HUNGER GAMES by Suzanne Collins, a compulsively-readable futuristic novel about a ritualistic sporting event that has higher than normal stakes. (Only the winner comes out alive.) According to my friends at the bookstore, every kid who reads this book immediately begins clamoring for the next volume in the trilogy -- and volume two isn’t due out for at least a year. Suzanne Collins was recently here in Michigan. When I heard that she had agreed to “sign stock” for my favorite bookstore, Bookbeat, I dropped off my copies of THE HUNGER GAMES in hopes they’d be signed. Long-time readers of this blog may remember that some months ago I bartered for a spiral-bound “second draft” of this manuscript. I was thrilled that Ms. Collins signed that copy, plus my hardcover first edition, last week. What a treasure! 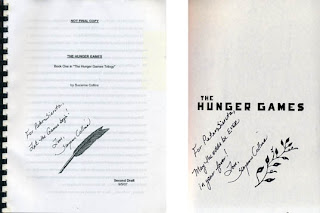 IF KIDS COULD VOTE

The presidential election is only a couple weeks away. I was wondering how our candidates were faring in the world of children’s books, so visited Amazon.com where I learned there are 54 current or forthcoming kids’ titles that cite the name Barack Obama and 91 that reference John McCain.

The current sales ranking for the Obama title is #714, with McCain ranked #984.

I wonder how these “poll numbers” will compare to the general election numbers.

A couple weeks ago I heard Heather Henson and David Small talk about their fine new picture book, THAT BOOK WOMAN. Ms. Henson mentioned a customer review on Amazon.com in which someone said, “Caldecott winner David Small's illustrations are...well, Caldecott worthy as usual. (But I'm wondering where them tow-headed twins come from with Mama, Pap, Cal and Lark all with hair black as night.)”

Henson then showed a picture of her own family -- all with hair black as night...except for her own tow-headed twins.

WHAT CHILDREN’S BOOKS DO AUTHORS READ?

I’m always curious to hear authors talk about their own favorite books. I was once at an author event where a kid asked Lois Lowry if she reads children’s books and she said, “I’m an adult and I read adult books.” As an adult who reads all kinds of books, I was sorry to hear that. (But if reading mainly adult books causes her to write such brilliant chidren’s books as THE GIVER and the “Anastasia Krupnik” series, who am I to say she is wrong?)

I was tickled to learn that my favorite writer, M.E. Kerr, is a big fan of AL CAPONE DOES MY SHIRTS by Gennifer Choldenko.

who didn’t like much of anything. In an introduction to the 1970 paperback edition of THE SPIRIT OF JEM by P.H. Newby, Wojciechowska begins, “Recently someone asked me to speak on the subject of children’s books and I said, ‘Fine, but I’ll have to blast them because I think most of them dreadful. I’ve enjoyed only three recently published books, A WRINKLE IN TIME, HARRIET THE SPY and JAZZ COUNTRY.’ So they said, ‘Thank you anyway’ and of course I didn’t give my speech.” (She then goes on to say that she’d just read THE SPIRIT OF JEM and would add it to her list of good books.)

THE GREATEST LOVE OF ALL

Frankly, I’m surprised Maia didn’t include a few of her OWN titles on her list of good books. She was never shy about promoting them. In her novel THE ROTTEN YEARS (talk about dreadful books! Though I’ll be the first to admit this book is both dreadful and dreadfully fascinating), she has a teacher (who serves mainly as a mouthpiece for Wojciechowska’s own idiosyncratic beliefs) give a reading list of “great books” to her students...and it includes the Maia Wojciechowska novel DON’T PLAY DEAD BEFORE YOU HAVE TO front and center!

But Maia’s got nothing on Bette Greene in the “I Love Me” Sweepstakes. In her novel THE DROWNING OF STEPHAN JONES, Ms. Greene has her protagonist writing an essay for school about the book SUMMER OF MY GERMAN SOLDIER...writtten by none other than Bette Greene!

And Clement Hurd includes a graphic reference to THE RUNAWAY BUNNY in GOODNIGHT MOON.

Can you think of any more self-referential (some might even say “self-reverential”) moments in children’s books?

CHAINS WILL BE ADDING ANOTHER LINK

CHAINS by Laurie Halse Anderson was nominated for a National Book Award this week. I’ve heard nothing but great things about this title and can’t wait to read it. But one thing I haven’t heard mentioned too often is that CHAINS is the first of a series. Maybe early reviewers were not aware of this because that information wasn’t included in the advance reading copies that went out to critics. But in the hardcover edition, the last page tells us that the next volume will be called FORGE: 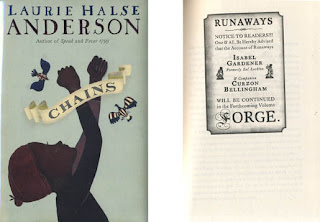 I wonder if Anderson originally wrote her manuscript as one gi-normous book which the editors decided to divide into two volumes, or if she first wrote CHAINS and then later began writing a sequel. It will be interesting to learn more about this.

Earlier I spoke of receiving lots of books for my birthday, so I thought I’d share them with you in today’s blog. Here’s a must for any children’s book enthusiast -- MORROW JUNIOR BOOKS : THE FIRST FIFTY YEARS by Leonard S. Marcus, which covers the history of the publisher who brought us Beverly Cleary, Carolyn Haywood, and so many others. If you can track down a copy of this softbound volume, make sure it includes the pull-out poster by Stephen Kellogg: 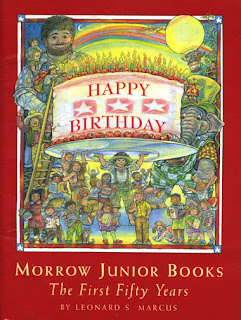 I also received a program for this year’s Newbery-Caldecott Awards dinner. I was thrilled to add it to my shelves, right beside the winning books from 2008: 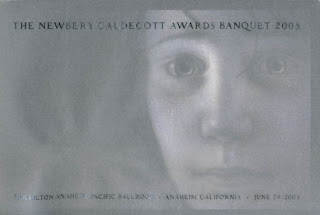 I love the old Scholastic paperbacks from the 1950s and 1960s. A book-buddy sent me this edition of TROUBLE AFTER SCHOOL by Jerrold Beim. I’m not familiar with this title at all, but am anxious to read this good-kid-gone-bad story from 1957: 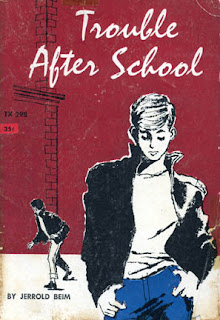 The back pages of the book have an order form listing many more Scholastic titles, such as MiSS PICKERELL GOES TO MARS by Ellen MacGregor, YOURS TILL NIAGARA FALLS by Lillian Morrison, and REVOLT ON ALPHA C by Robert Silverberg -- all for 25¢ a piece, plus 5¢ shipping and handling. Oh how tempted I am to send in this order form from so many years ago...just to see what kind of response I’d get!

Incidentally, the same book-buddy who got me into “trouble after school” sent me a huge box of ARCs (advance reading copies) of children’s and young adult books...some of which won’t be published till next summer. How cool is that? These are only SOME of them: 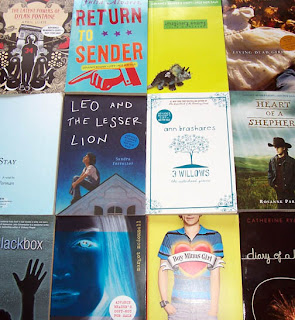 And my parents gave me this big volume which isn’t, specifically, a children’s book, but will evoke childhood memories, as it contains news items, ephemera, hilarious advertisements, and assorted facts about sports and entertainment from the year 1958. 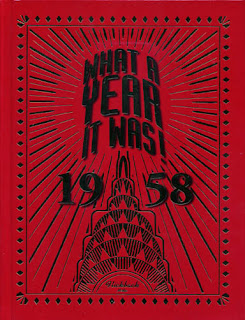 The publisher, Flickback Media, has issued volumes like this for most years and they make great birthday gifts. I know I thought it was a great birthday gift. Though I’m confused. Why did my parents give me this volume for 1958 when I was actually born in 1978? 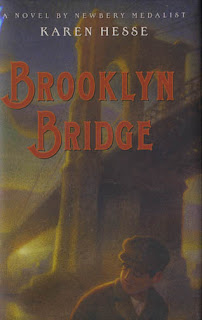 Thanks, as always, for visiting my blog!
Posted by Peter D. Sieruta at 4:26 PM

I don't know if CHAINS was originally envisioned as a series, but I do know that it wasn't all written in on ginormous lump -- Laurie's currently working on the second installment.

Happy birthday, Peter, and may you have many more!

About Lois Lowry, I wonder if she meant that as an adult, whatever she read could be an adult book? I know some children's book authors who feel like the age-separation between books is unnecessary. Have to say I agree with that last, as some adults still express dismay that I read children's books, and then follow that with, "Well, you're a librarian, you probably have to... "

Too bad they don't know the fun they're missing.

Ah, Miss Pickerell! I haven't thought about her in years. Thanks for jogging my memory.

Happy belated birthday wishes! What great presents. Enjoy them all!