He Does Have a Name After All

A young white boy, growing up in 1920s Virginia, was tutored by an elderly African American man who taught at the local “Negro school.” One evening this teacher shared the myth of Odysseus and his dog Argus and then, in a rare personal moment, related a story from his own childhood about a coon dog named Sounder.

The boy grew up and became a teacher himself. Fifty years later, strolling beside a Connecticut river one autumn evening, he heard -- or imagined he heard -- the baying of a dog and the story of Sounder came flooding back to him. This farmboy-turned-teacher, William H. Armstrong, spent that winter writing a novel inspired by the life of his childhood tutor.

The book was finished by spring, but Mr. Armstrong was unsure about its quality. One day he saw a neighbor outside chopping wood and asked him to read the manuscript. When I first heard this story, I was a bit taken aback. Why in the world would William Armstrong trust the literary opinion of a neighbor? It wasn’t until I did a little more research that I discovered his neighbor was the book review editor for THE WALL STREET JOURNAL! Oh. That makes more sense. His neighbor liked the book, but felt it was much too lengthy and suggested dividing it into three separate volumes. The author complied and sent the first section to Harper and Row, which had published some of his academic books and a memoir he’d written many years earlier.

A simple story, powerfully told, SOUNDER went on to win the Newbery Medal, be made into a major motion picture, and become a classroom favorite. Many regard it as a modern classic.

Not that the book was without critics. Some felt it was presumptuous for a white author to write a story about a black family. Others complained about the narrative voice. The characters in SOUNDER are not given names. The protagonist is called “the boy.” His parents are “the man” or “the boy’s father” and “the woman” or “the boy’s mother.” Only the dog is named. Many readers feel that this stylistic choice gives Armstrong's elemental tale the stark power of a myth. Others claim that leaving the characters unnamed diminishes or even dehumanizes them. In an article about the book, critic Albert Schwartz stated, “Within the white world, deep-seated prejudice has long denied human individualization to the Black person.”

Reading SOUNDER as a child, I found the lack of character names to be distancing. Today, as an adult, I very much admire the book, although I’m still not sure I can say I love it. I just don’t feel the emotional attachment. Would I like it better if the characters had been named? I don’t know.... I will admit that whenever I read this novel, I do wonder what “the boy” was really named.

Little did I know that the answer has been out there -- for nearly forty years! 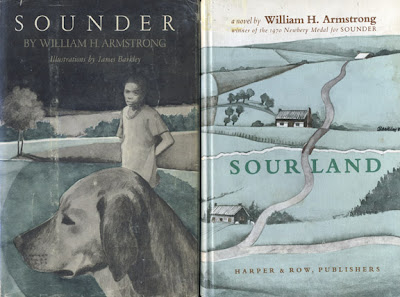 As mentioned earlier, William H. Armstrong originally constructed his story in the form of a lengthy novel. On the advice of his neighbor, he published the first portion of the book as SOUNDER, a slim volume of only 116 pages. I was unaware that Armstrong’s two subsequent novels, SOUR LAND (1971) and THE MACLEOD PLACE (1973) comprised the final two sections of his original manuscript.

I well remember when SOUR LAND arrived on the “New Book” table at my public library. Having enjoyed SOUNDER, I was looking forward to reading the author’s latest...but I just couldn’t get into it. The pace was slow, the perspective was adult, the dialogue affected. I didn’t get past the first couple chapters. I recently picked up the book again and now I recognize its problem. It’s not a story for kids at all; it’s clearly an adult novel disguised as a children’s book. This is not surprising since William Armstrong himself never planned on writing for young people...“didn’t know SOUNDER was a children’s book until it was published”...and had never even heard of the Newbery Medal until he won it. SOUR LAND is related mainly from the perspective of a widowed man raising three children and focuses on that family’s relationship with Moses Waters, a sixty-two-year-old African American man who teaches at the local “colored school” and does farm work in the summertime. A wise, sensitive, and ultimately tragic figure, Moses is a larger-than-life character in a book that is long out of print and now mostly forgotten.

As I said, I never could get past the first couple chapters of SOUR LAND when I was a kid, but I was able to push through it this week, nearly forty years after it was published. Imagine my surprise when I reached the end of the penultimate chapter and came across this scene in which Moses brings a flower to the grave of a newly-deceased pet:

“What was his name?” Jonathan asked.

“Sounder,” Moses answered, and added, “he was a hunting dog and had a beautiful voice.”

So there you have it.

All these years of wondering about the name of “the boy” in SOUNDER -- a book that almost everyone has read.

And the answer was there all along in SOUR LAND -- a book that almost no one has read.
Posted by Peter D. Sieruta at 2:47 AM

I loved the writing in Sounder, but found the book so sad. It's an Oprah book for kids.

I doubt I would have ever read Sour Land, so I'm happy to know about "the boy" and William H. Armstrong - thank you! (And I linked to this on "The Newbery Project").

I can name another school you wouldn't want to go to--It's in a book I loved as a youngin' called "The Wolves of Willoughby Chase". The two main characters are sent to a 'school' where they eat gruel and do laundry and sewing (in the age of washboards and mangles), and tattletales are rewarded with chunks of cheese. The only time they have 'school' is when the crooked superintendent drops by, and everyone lines up and yells the alphabet. It ends well, though. =)

Another I can think of is in "Words by Heart," a heartbreaker of a book but a very good read--it was even made into a PBS movie, which co-starred the actress who played Mrs. Garrett on 'Facts of Life.' The protagonist's (a young African-American girl) mother is a teacher, and when the kids go to school, the littlest brother asks his teacher for a new book because the one she gave him is worn out and dirty. The teacher and the boy battle it out until the mom comes in and glues a piece of paper over the inside cover, hiding the notations on the condition of the book based on the race of the student it was issued to.

And who could forget Eliza Jane Wilder losing control of her class in DeSmet, South Dakota, and sending Laura and Carrie Ingalls (her future in-laws!) home for bad behavior?

I love reading your blog because it brings back all of those wonderful memories of things I've read and only thought I've forgotten. =)

I just love your posts! I read Sounder as a kid and still have my little paperback copy but I wasn't aware of Sour Land at all. Thank you for bringing it to my attention!

Interesting post as for me. I'd like to read something more concerning that theme. Thanks for sharing that material.
Joan Stepsen
Cyprus call girls

Nice story as for me. I'd like to read a bit more concerning that matter.
Thanks for giving that material.
Marina
female Kiev escort

I was very pleased to find this site.I wanted to thank you for this great read!! I definitely enjoying every little bit of it and I have you bookmarked to check out new stuff you post.