Tonight a sudden, fierce snowstorm turned my usual half-hour commute into a two-hour white knuckle nightmare. As I inched my way home I began to think of all the snowy, wintertime books that have received the Caldecott Medal, starting with those back-to-back winners WHITE SNOW, BRIGHT SNOW and THE BIG SNOW, and including THE SNOWY DAY by Ezra Jack Keats, THE POLAR EXPRESS, OWL MOON, and SNOWFLAKE BENTLEY. Intermediate and young adult novels with snowy settings are usually much darker in tone than those pleasant picture book idylls. Harry Mazer's SNOWBOUND features two teenagers trying to survive a winter car wreck. Emma Smith's NO WAY OF TELLING has a girl and her grandmother facing-off with a menacing stranger during a snowstorm. In the long out-of-print but still memorable GAME OF TRUTH by Edith Maxell, a group of blizzard-bound young adults play a dangerous psychological game.

Two wintry books especially linger in my memory, perhaps because I started off not liking them, then later changed my mind. 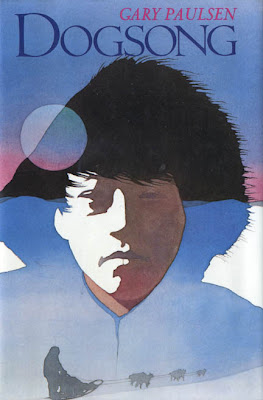 I'll admit that the first time I read Gary Paulsen’s novel DOGSONG I was not impressed.

Even though it came with great credentials (it was a 1986 Newbery Honor Book), I did not feel particularly involved with this story of a modern Eskimo boy who makes a journey of self-discovery while preparing for and competing in a sled dog race. The novel seemed too introspective, too laden with native spirituality. I remember setting the book aside and walking outside. I looked down at the snow piled up against the fence and then folded my arms across my chest to fend off the cold.

Then I realized that I wasn’t looking at snow -- I was looking at a bed of white flowers. And it wasn’t cold outside -- it was a hot afternoon in June.

Even though I thought I wasn’t enjoying DOGSONG, Paulsen’s atmospheric writing had cast such a strong spell that, even as I stepped into an eighty-degree afternoon, I somehow remained on that frozen tundra with young Russel Suskitt and his dogs. That moment made me reevaluate both DOGSONG and the power of Paulsen’s prose -- and I came away realizing this author really was something special. 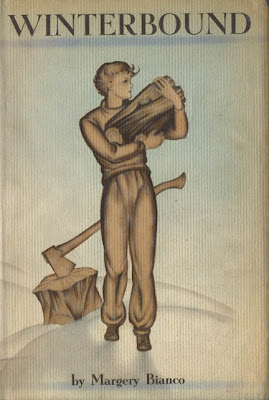 I had a very similar experience a year or two later when I read WINTERBOUND by Margery Bianco. Like DOGSONG, this is another snowy story which was named a Newbery Honor Book. Published in 1936 and illustrated by Kate Seredy, who obviously had a lot of free time on her hands after writing THE GOOD MASTER and designing her model of a Hungarian ranch (see earlier blog entry “The Good Master! Sweet Ladies!”), this story of four siblings fending for themselves in rural Connecticut also didn’t grab me. The characters seemed distant, the focus diffuse. One evening I was reading the book and came across a scene in which the youngest son goes fox-hunting at night and becomes moonstruck. I had never heard of this phenomenon before. I always assumed that “moonstruck” was just an expression like “lovestruck” -- not a real physical sensation which makes one feel “dizzy and strange” as Martin does in the novel. A few minutes after reading about this incident, I went out to mail a letter. As I walked to the post office, I happened to glance up at the clouds traversing the moon...then stood transfixed. The next thing I knew, I was grabbing for the nearby iron fence feeling so “dizzy and strange” that I didn’t think my legs could hold me up. Once again, the subtle influence of this novel -- a book I thought I didn't like -- had gotten under my skin and taken me someplace unexpected. And I had to reappraise Bianco's novel and realize it was much more effective and powerful than I originally thought. Incidentally, when I took the book off my shelves tonight to look up this scene, I initially began searching for the “chapter” about Martin becoming moonstruck and was surprised the incident didn’t fill an entire chapter...didn’t even fill an entire page...but was related in just a few lines. Yet Bianco had described this event so eloquently it seemed in my memory to have lasted pages and pages.

Reading both DOGSONG and WINTERBOUND taught me not to make snap literary judgments. Sometimes a book can cast a quiet, stealthy spell you won’t discover until you find yourself trembling with cold on a June afternoon or staring into the sky, hypnotized by the moon.

It was Paulsen’s breakthrough book, which was followed by HATCHET and dozens of other major novels.

Will be sought by those who collect books on Eskimos, sled dog racing, and native traditions.

Fairly difficult to find. In fact, none are currently listed for sale on ABEbooks. I would imagine a first edition in very good condition could run $75-$150 or more, but that’s just a guess.

Will be sought by those who collect books by Bianco or the illustrated works of Kate Seredy.

Might be considered an early feminist book, especially with regard to sister Garry who, like many of the older girls and women in Bianco’s young adult novels, does not represent typically female stereotypes of the era.

Bound in blue cloth with evocatively illustrated endpaper. My copy is price clipped but the number 1215 is at the bottom of the front flap. The date MCMXXXVI is on the title page with “First published October 1936” on the verso.

Though nearly fifty years older than DOGSONG, this novel remains a fairly easy and inexpensive “find,” with copies available for $20-$50.
Posted by Peter D. Sieruta at 1:07 AM

Peter You should publish your blog it is a must read daily. Keep your phone current you never know when you may find yourself in another snow storm! I went immediately to find my copy of Hitty Her First Hundred Years which I purchased in 1980 for $4.75 which I thought a fortune for an old USED book! It began my passion for childrens books.
Marilyn

Peter,
I really enjoy reading your entries as you have such an eloquent way with words. Thank you. While I can relate to your white knuckle experience of 2 hour drive home in the snow, I am impressed by your ability to practice alchemy....transforming this stress into beauty. Cheers!
CK of BB turned me onto your blog and I am grateful.
Kim