A Season for Sharing

This past weekend, I asked readers to share what books they planned to read on Christmas Eve.

Laura C. said that she likes to share "Twas the Night Before Christmas" with her son every year.

Wendy said her favorite is "CHRISTMAS ALL YEAR 'ROUND (1952), edited by Marjorie Vetter, which contains 25 Christmas stories from American Girl magazine--it used to be the official magazine of the Girl Scouts, but was similar to YM or Seventeen, and published excellent fiction. Most of the authors aren't anyone people have heard of anymore unless you're me; the most famous is probably Lenora Mattingly Weber, who wrote the cult-favorite Beany Malone books."

I want to read this book too, but it's almost impossible to find these days. And our library's copy is missing!

Linda revealed, "I usually don't have any time on Christmas Eve to read anything, but four books I must re-read before Christmas are THE TUCKERS: THE COTTAGE HOLIDAY, Kathryn Lasky's CHRISTMAS AFTER ALL, and Frances Frost's SLEIGH BELLS FOR WINDY FOOT, as well as A CHRISTMAS CAROL. If I can, I do like to read the last FEW chapters of Kate Seredy's THE OPEN GATE (starting with the Pearl Harbor chapter.)

Well, that got me excited. I'm a fan of the Tuckers books too, but have not read THE COTTAGE HOLIDAY and, in fact, did not even know it was a holiday story. Now it's going on my "find and read" list, along with the other books Linda suggested!

Brer is a fantasy fan: "I like to read "A Christmas Carol" of course, but also THE BOX OF DELIGHTS by John Masefield, THE DARK IS RISING by Susan Cooper, HOGFATHER by Terry Pratchett, and THE LION, THE WITCH, AND THE WARDROBE by C. S. Lewis."

An anonymous reader contributed this: "I found my all time favorite Christmas read on a sale table in the front entry way at Schulers bookstore in Grand Rapids, Michigan years ago. The FOUR MIDWESTERN SISTERS CHRISTMAS BOOK is a treat to read especially for those of us who were born in the 50's. It is a wonderful collection of recipes, holiday craft projects, stories, and traditions."

I've got the same book, Anonymous! And I found mine on the sale table at Borders in Ann Arbor, Michigan, one New Year's Eve many years ago. I love it too!

And bookseller P.J. Grath said, "I'm happily all set with reading, as a friend has sent me two children's stories she's written. She's written others but is starting me with these two. What a gift! Now I feel like a kid with a big, mysterious, exciting wrapped box under the tree!"

P.J.'s comments actually have a connection with a note I got from blog-friend Mary. She wasn't able to post in the comments section, but she wrote me to say, "I will be reading two books of short stories by Katherine Paterson, one story each day, throughout the month of December. They are titled ANGELS AND OTHER STRANGERS : FAMILY CHRISTMAS STORIES and A MIDNIGHT CLEAR."

A few weeks ago this blog posed a question about Christmas books: since they are presumably read only for a month or so each year, are they "money makers" for publishers? Do they sell enough copies in November and December to justify remaining in print all year long? I guess they must, as Ms. Paterson's two collections have been in print continuously since they were published in 1979 and 1995. In some ways, these volumes are quite different from the author's usual books. Instead of concerning children, the stories frequently focus on old men, married women, fathers and mothers. Though Christianity has quietly informed much of Paterson's work, it is most evident in these Christmas collections. Though enjoyable to read (and read aloud) the tales sometimes seem a bit purposeful and lack the nuance of the author's very best work.

ANGELS AND OTHER STRANGERS was released just after Katherine Paterson's career skyrocketed with a National Book Award (THE MASTER PUPPETEER) followed by a Newbery Medal (BRIDGE TO TERABITHIA) and another NBA win (THE GREAT GILLY HOPKINS.) By the time A MIDNIGHT CLEAR was published, she'd won a second Newbery (JACOB HAVE I LOVED) and was acknowledged as one of the world's most important writers for children. Yet it's possible that none of those award-winning novels would have been written if it hadn't been for the humble Christmas stories collected in ANGELS AND OTHER STRANGERS.... 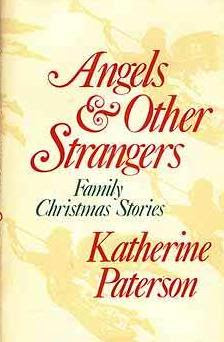 It all began in 1967, years before Katherine Paterson had ever published a word of fiction. In fact, she'd only written two short stories in her life. Neither had been published. But that year, the author's minister husband decided that, rather than deliver a sermon at his church's Christmas Eve service, he wanted to read a short story. Katherine went to the library in search of yuletide stories, found none that pleased her ("I can do better than this!" she remembers thinking) and decided to write one of her own.

That Christmas Eve her story was read at the Takoma Park Presbyterian Church, beginning an annual tradition of original Katherine Paterson stories being shared every December twenty-fourth -- first in Maryland, and later in Virginia and Vermont, as the family moved to different church assignments.

The author said, "In those early years, propelled perhaps by my loving congregations' responses to my Christmas stories, I began to write fiction seriously."

In other words, if Katherine Paterson had not shared that first story forty-four Christmases ago, we might not have Jess and Leslie, Sarah Louise and Caroline Bradshaw, Gilly, Lyddie, Jip, Jimmy Jo, and so many others...so many stories.

Katherine's husband, John, is now retired from the ministry. Today he occasionally collaborates with his wife in writing children's books -- most recently THE FLINT HEART. I don't know if Ms. Paterson still writes a new Christmas story each year, but I do know that the stories from ANGELS AND OTHER STRANGERS and A MIDNIGHT CLEAR continue to be shared from other pulpits in other churches each and every Christmas. And of course they are always waiting for any of us to read within the covers of ANGELS AND OTHER STRANGERS, that offbeat children's book, so different from most of the author's work yet containing heartfelt stories -- some written during the apprentice phase of her career -- that continue to delight and inspire readers.

...And speaking of apprentice writers, wouldn't it be fun to sit around P.J. Grath's Christmas tree this weekend, hearing those two brand-new Christmas stories written by her friend? Who knows -- Perhaps that friend will go on to have the kind of success Katherine Paterson has had.

Whether you're reading aloud a tale from one of Paterson's Christmas books...or an unpublished story written by a friend...or maybe even a holiday tale you've written yourself, what better way to celebrate the season than sharing a story with someone this Christmas Eve?
Posted by Peter D. Sieruta at 8:36 PM

Our family favorite for Christmas sharing is a little gem written and illustrated by Trina Schart Hyman early in her career - HOW SIX FOUND CHRISTMAS. It has some of Trina's best art ever (I've been collecting her books for 40 years), and tells of a little girl and five animals she meets along the way to discover Christmas. They find a solitary green bottle lying in the Great Snow Forest which she takes home and fills with pine boughs and holly ... "and, lo! it was a Christmas, because Christmas is not only where you find it, it's what you make of it." I've told the story with hand puppets in schools and libraries over the years - and this year in my grandson's PreK class, where the teacher had the kids each decorate "a Christmas" to take home. Originally published by Little, Brown in 1969, it was later reissued by Holiday House, but now, sadly, seems to be OP.

Another favorite, also illus. by Trina and written by Louise Moeri, is THE STAR MOTHER'S YOUNGEST CHILD. Both of these gems fall into the category of "little" picture books - small trim size, but so perfect for sharing one to one.

Two wonderful collections of Christmas stories by Ruth Sawyer - THE LONG CHRISTMAS and THIS WAY TO CHRISTMAS - have enriched my holidays over the years. Sawyer (a Newbery winner for the semi-autobiographical ROLLER SKATES) knew how to take an old tale and retell it in the most beautiful language. Her stories are heartwarming, poignant, and vibrant (especially "A Candle for St. Bridget" in THE LONG CHRISTMAS.)

But for Christmas Eve itself, I love reading aloud from Dylan Thomas's A CHILD'S CHRISTMAS IN WALES - the edition illustrated, naturally, by Trina Schart Hyman.

Big Susan by Elizabeth Orton Jones is a favorite of ours.

I'm having trouble remembering The Cottage Holiday, although I love the Tuckers. Is it the one in which Penny gets the idea that they should have their Christmas celebration at the lake?

Hi, can i ask you something? I'm looking for children books with "scary" illustrations like wolf (or fox) eating pigs (or seven kids or Red Riding hood or birds in Chicken Little) or being pictured with a fat stomach. Have you seen any book of this sort? Any sort of help is appreciated. Thanks in advance. Great blog, by the way! And merry Xmas!

I like to read "The Children of Green Knowe" every Christmas. I hope you had a wonderful holiday, Peter. Thank you for sharing your blog with us!

Bybee--yes, yes, that is the one! And they find a baby in an abandoned trailer, and a cougar is stalking their friends' farm animals, and they play in the snow and have a skating party...it's all too lovely! Peter, you must find a copy!

SMALL MIRACLE, by Peter Collington--it's a wordless book, but you can spend considerable time with it, reading every picture. It's a masterpiece. And Elizabeth Goudge's THE DEAN'S WATCH. And THE STORY OF HOLLY AND IVY, by Rumer Godden, and Eva Ibbotson's THE STAR OF KAZAN.

I couldn't comment on your original post, Peter, because I was frantically trying to get some holiday stuff done. And I didn't even have a blog to write!

One of my favorite Christmas stories is called 'A Green Christmas' by Theodora Kroeber (an anthropologist best known for writing about "Ishi" the last Yana Indian in California; and being the mother of Ursula LeGuin) It's about two pioneer children recently relocated from Colorado to California, and wondering how Santa will find them and if it can be Christmas without snow. It is wonderfully place-driven, and although the language is a little stilted, I find it utterly charming.

Thanks for the background on the Paterson stories. It's always fascinating to find 'behind the scenes'.

On Christmas Eve, we always read the newspaper column written by Leonard Wibberley on what Christmas was like in "Baghdad by the Hudson" in the 20s'/30s. It was published December 24th in the Los Angeles Times and I still use the old and faded clipping.

Nothing gives more satisfaction then the comments of readers for an author. I would appreciate if you take some time to read my novel "The Lords Of Kumaon" I would love to hear from you about my first work. I sincerely hope you would encourage my book. Please visit http://thelordsofkumaon.blogspot.com Thank you.