Most book collectors are pretty persnickety about the volumes they add to their shelves.

The books must be first editions. The dustjackets must be crisp, with no chips or tearing. The pages must be unmarked with no stains, spots, or smudges.

But I know at least one volume which collectors want to find smudged.

The book is A WIZARD OF EARTHSEA, written by Ursula K. Le Guin and published by the Parnassus Press in 1967. Founded by Herman Schein in 1957, this small, Berkeley-based children's book publisher had a hit almost right out of the box when BABOUSHKA AND THE THREE KINGS, written by Ruth Robbins (AKA Mrs. Herman Schein) and illustrated by Nicolas Sidjakov, won the 1961 Caldecott Medal. Although perhaps best known for picture books, 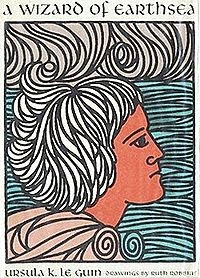 Paranassus also published works for older readers, including novels by Edward Ormondroyd (TIME AT THE TOP, 1963) and the biographical account ISHI, LAST OF HIS TRIBE (1964) by Theodora Kroeber. Ms. Kroeber was the mother of Ursula K. Le Guin who, during the 1960s, was making her mark as a poet, short story writer, and author of several paperback science fiction novels. In 1967, Herman Schein invited Ursula Le Guin to write a novel for young adult readers. A WIZARD OF EARTHSEA was the result. This coming-of-age story concerns Ged, a boy growing up on one of the islands of Earthsea. When he discovers he has a talent for magic, he is apprenticed to a "mage," then sent to a school for wizards. (No Quidditch at this school.) Ultimately, he must battle an evil spirit which he has recklessly summoned into the world. Met with great critical acclaim, A WIZARD OF EARTHSEA won the 1968 Boston Globe-Horn Book Award and, though originally conceived as a stand-alone novel, was followed by several more "Earthsea" books including the 1972 Newbery Honor THE TOMBS OF ATUAN and the 1973 National Book Award winner THE FARTHEST SHORE. With millions of copies sold, the "Earthsea series" is considered a landmark achievement in twentieth century fantasy writing.

Needless to say, A WIZARD OF EARTHSEA has become one of most collectable fantasy novels of all-time. Over the years, dozens of editions have been printed in both hardcover and paperback, but readers seeking the true first printing always want a copy of that 1968 edition published by the now-defunct Parnassus Press. Unfortunately, they're as hard to find as dragon's teeth. The original first printing was only 6800 copies, most of which went to libraries. There would later be two more Parnassus printings totally 16,200 copies. Unlike most publishers, which utilize copyright page statements or other measures to distinguish between various printings/editions, Parnassus did nothing to indicate the difference between a book from the 6800 first printing and the 16,200 copies that followed.

Or at least they did nothing intentionally.

But as L.W. Currey noted in SCIENCE FICTION AND FANTASY AUTHORS : A BIBLIOGRAPHY OF FIRST PRINTINGS OF THEIR FICTION AND SELECTED NONFICTION (1969), a minor printing error helps collectors learn if their copy is one of those precious 6800 books from the original run. Currey states, "All examined copies have a faint vertical line or smudge from the top to the base of the title page, generally running through the r or d of Wizard to the p or s of Press."

In other words: If you find a copy of A WIZARD OF EARTHSEA published by Parnassus and it does not include the smudge on the title page, it is one of the 16,200 later printings and is worth a nothing-to-sneeze-at $150 to $200.

However, if you run across one of the rare copies with a title page smudge, you've found a true first printing, valued at $1000 to $3000.

I mentioned before that book collectors are notoriously persnikety.

Right now I'm imagining one of those finicky folks coming across an extremely underpriced Parnassus Press edition of A WIZARD OF EARTHSEA in a used bookstore and taking out their monocle or lorgnette (AKA glasses-on-a-stick) or jewelers loupe (note: the more persnickety you are, the more likely you are to use a monocle, loupe or lorgnette) in order to slowly examine the volume page-by-page. After much page-turning and sighing, they'd cast the book aside, declaring in a snooty voice, "Oh this copy won't do. It won't do at all! The title page is smudged! I refuse to pay $20 for any book that is less than PRISTINE! I will wait for an unsoiled copy of A WIZARD OF EARTHSEA to turn up...even if it does cost a few dollars more!"
Posted by Peter D. Sieruta at 9:15 AM

That's the undeniable side of classic books collectors. Patience is a virtue, and we know that it's truly worth it. Perhaps, that's the process of creating treasures.

The visit was useful. Content was really very informative. From www.smartflowersdelhi.com

Gifts have the magical power to change any atmosphere or any mood. Imagine someone missing you, and a simple gift can melt the distance between two hearts within seconds. Sweet memories are the ones we always cherish, and gifts reinforce the cherishing further. Visit www.hongkongfloristshop.com for more details.

The visit was useful. Content was really very informative. From www.gifts-to-india.com

Keep up the good work. Best of luck. From www.singaporeflowershop.com

The visit was useful. Content was really very informative. From www.expressgiftsdelhi.com

I don't think I'll ever be that kind of collector. I'm not detail-oriented enough.

The visit was useful. Content was really very informative. From www.expressflowersbarcelona.com.

The visit was useful. Content was really very informative. From www.quickflowersberlin.com.