Brunch for a Snowy Sunday

Today's brief Sunday Brunch identifies three valuable books for collectors, uses reverse psychology on a popular Mock Newbery contest, and includes a list of all the celebrities who have promoted children's books on the American Library Association's READ posters.

HERE IN THE MIDWEST... 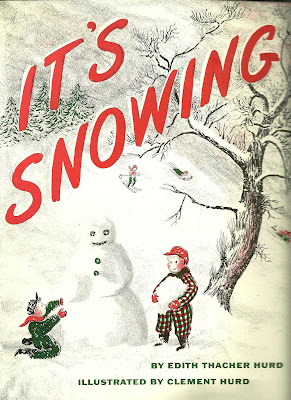 The roof of the Metrodome has collapsed in Minnesota.

Parts of Illinois and Indiana are under a winter storm warning.

Where I live, just north of Detroit, they are predicting four to eight inches of snow later this afternoon.

Here's what it looked like out my back door this morning: 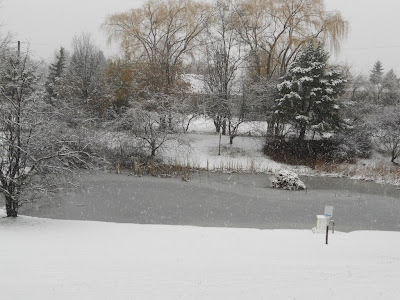 I just hope the muskrats are warm in their house out on the pond: 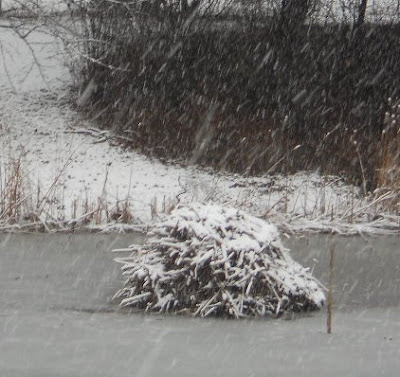 "IT'S SNOWING" IN YOUR HOUSE?

Incidentally, are you familiar with the 1957 Edith and Thacher Hurd book pictured above? Do you by chance have an old copy of the book at your house?

If so, you could be sitting on a gold mine.

And if you think that's a lot, how about this book by the Hurds: 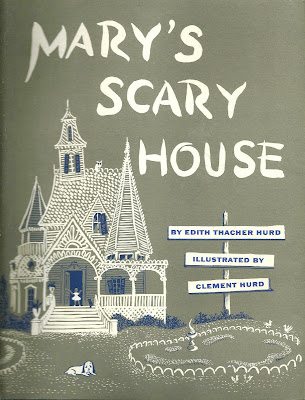 While tracking down images for the two Hurd books, I came across this totally unrelated dustjacket for a 1967 book called THE GHOST OF OPALINA, OR NINE LIVES by Peggy Bacon: 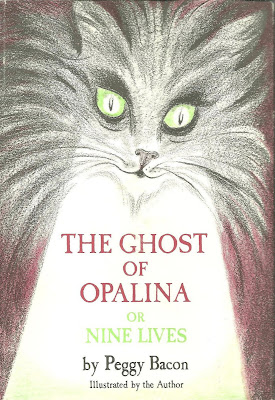 All three of these titles are good examples of books that never won any awards or prizes, aren't popular enough to remain in print today, yet are still so well-loved by readers that collectors are willing to pay hundreds or thousands of dollars for them.

Today's the day that the Heavy Medal folks convene at the Oakland Public Library to choose their Mock Newbery winner.

My first thought was that I'll probably throw up if the winner turns out to be THE KNEEBONE BOY (also known as MENTAL ILLNESS CAN BE FUN!, subtitled "AND IF YOU THINK MUM IS NUTS, WAIT TILL YOU GET A LOAD OF MY MUTE BRO, MY DAFFY AMERICAN AUNT, AND ME, A GIRL WHO'S IN LOVE WITH A PICTURE OF HER MOTHER IN DRAG."

But the more I thought about it, the more I began hoping that KNEEBONE BOY does win the prize.

Because the winners of the Oakland Mock Newbery never seem to actually win the real Newbery Award .

2010's prizes are a perfect example. WHEN YOU REACH ME was as close to a sure-winner as possible. But it was only named a Mock Honor by Oakland, joining other Mock Honors CLAUDETTE COLVIN and MARCHING FOR FREEDOM, as the top prize went to WHEN THE MOUNTAIN MET THE MOON by Grace Lin.

2009 was an oddball year as well. Oakland's Mock Newbery went to THE PORCUPINE YEAR, with Mock Honors going to AFTER TUPAC AND D FOSTER and ALVIN HO : ALLERGIC TO GIRLS, SCHOOL AND OTHER SCARY THINGS.

2008's mock winner was ELIJAH OF BUXTON by Christopher Paul Curtis, with honors going to THE ABSOLUTELY TRUE DIARY OF A PART-TIME INDIAN; GOOD MASTERS! SWEET LADIES!, and THE WEDNESDAY WARS by Gary D. Schmidt.

2007's top title was A DROWNED MAIDEN'S HAIR by Laura Amy Schlitz, with Mock Honors going to ALABAMA MOON, THE KING OF ATTOLIA, and A TRUE AND FAITHFUL NARRATIVE.

One has to go all way back to 2006 to find a year when Oakland's Mock Newbery pick, CRISS CROSS by Lynne Rae Perkins, went on to actually win the Newbery. (The Mock Honors that year were HITLER YOUTH, A WREATH FOR EMMETT TILL, JOHN LENNON, and SHOW WAY.)

Of course noting the fact that the Mock awards almost never match the real prize in no way disparages Oakland's selections. It just proves that, when you have two groups of people discussing a similar slate of books, they may well choose different winners due to any number of variables. Personally, I think Oakland's 2007 winner, A DROWNED MAIDEN'S HAIR, was a brilliant selection which actually should have won the official Newbery that year. On the other hand, Oakland's 2009 winner, THE PORCUPINE YEAR, pretty much stinks.

Stay tuned for the Mock winners at Heavy Medal tonight or tomorrow. And the real winners will be announced on January 10.

Yesterday I recorded a movie off TV called THEN SHE FOUND ME. It starred one of my least favorite actresses, Helen Hunt, as a 39 year old woman who had been adopted as a child and was now desperate to have a baby of her own.

Early in the movie, Helen is surprised when her birth mother turns up and wants to have a relationship with her. The birth mother is played by Bette Midler. During their first meeting, Bette recites a Dr. Seuss verse to Helen. She is surprised to learn that Helen's adoptive mother never read Helen that book.

On the one hand, it's always nice to see a reference -- any reference -- to a children's book in a big screen movie.

But, as usually happens, the movie got it wrong.

The book Bette quotes from is OH, THE PLACES YOU'LL GO -- the last book Dr. Seuss published in his lifetime.

So Bette shouldn't have been surprised that Helen's mother had never read her this book.

It wasn't published until Helen's character was 22 years old! 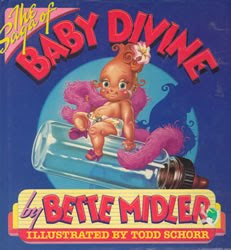 Did you know that Bette Midler was one of the earliest stars to jump on the "celebrity books for children" trend? In 1983 she published THE SAGA OF BABY DIVINE, a picture book about a baby who looks a lot like Bette Midler in diapers. She also wears a boa and high heels and her first word is "More." Unlike most of the pedantic celebrity books published in the years since, this is not a flat-footed and patronizing story directed at teaching kids a lesson, but more a faux children's book that uses colorful illustrations and rhyming text to speak to Midler's adult fans. One of those adult fans would post the following blurb on Amazon.com many years later: "A pentameter that rivals Seuss in creativity, timing, and rhyming," but the Boston Globe was a little less starstruck in this contemperaneous review: "Dr. Seuss doesn't have to stay awake nights worrying about being tumbled from the throne as the dean of children's books."

Bette Midler was shown cradling a copy of THE SAGA OF BABY DIVINE in one of the American Library Association's READ posters.

Bette was one of the first four celebrities (the others were Bill Cosby, Mikhail Baryshnikov, and Sting) photographed for the inaugural READ posters in 1985. Since then, nearly 200 actors, musicians, athletes, and other famous names have been featured in the long-running series.

Some are photographed alone, some are holding adult books.

Which ones were shown holding specific children's titles?

Does anyone remember this suspense novel for teens from the seventies? 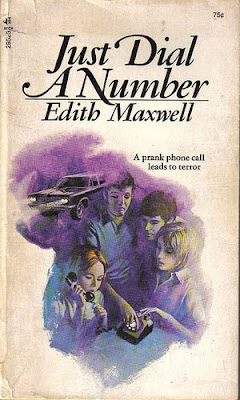 Everyone wanted to read it when I was a kid.

It was the combination of the alluring title and creepy cover illustration...the promise of crank calls...accidental death...teenage guilt...suspense...and the guy in the middle looked like Elvis....

It was wildly popular in paperback, but I don't think I ever saw the hardcover edition until a few years ago. I wonder how popular the book was in hardcover, considering what a mess the cover illustration is: 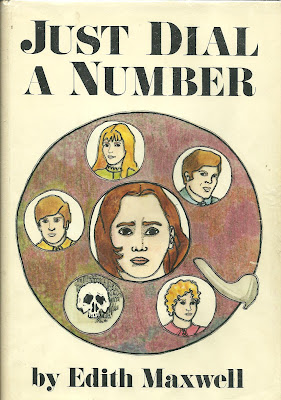 I actually think this scan improves upon the original illustration. It smooths out the fuzzy borders, tones down the blotchiness of the colors, covers up the places where the color goes outside the lines, and in general gives the image a more polished appearance. If you could see the actual hardcover book I'm holding in my hands right now, you'd notice all these irregularities -- and more. The book was published in 1971 by Dodd, Mead -- not exactly a fly-by-night publisher with no budget for art and design. So why did this title end up with a cover that looks like an untalented nine-year-old drew it with a handful of magic markers?

I guess it really does prove that "you can't judge a book by its cover," as Edith Maxwell's novel is actually quite entertaining and would be enjoyed by readers of Lois Duncan's books such as I KNOW WHAT YOU DID LAST SUMMER.

Every time I think about one of the books I enjoyed as a young reader, I wonder if it could be re-published for today's kids.

Right off the bat, I'd have to say this one would never get an audience.

Today's kids couldn't get past the title.

Thanks for visiting Collecting Children's Books. Hope you'll be back.
Posted by Peter D. Sieruta at 12:15 PM

Oakland had two mock Newbery groups last year. While my group picked WHERE THE MOUNTAIN MEETS THE MOON, Nina's group did indeed pick WHEN YOU REACH ME (with CLAUDETTE COLVIN, THE EVOLUTION OF CALPURNIA TATE, and THE DUNDERHEADS as Honor books). Generally speaking, I think Oakland has had great picks, but I agree with you about 2009.

The visit was useful. Content was really very informative. From www.hongkongfloristshop.com

I have never seen it but the movie Then She Found Me is based on Elinor Lipman's eponymous (love that word) first novel. I don't recall whether the book had a Dr. Seuss reference but I give Ms. Lipman enough credit that if it had, it would have been a book appropriately published during the heroine's childhood.

That Edith Maxwell book terrified me because of the prank phone calls that went on at every slumber party I ever attended. I felt like I was a potential perpetrator! I read it before I had read much Lois Duncan (except the two in my grade school library which I loved, Peggy - about Benedict Arnold's wife - and A Gift of Magic) but certainly would appeal to her readers.

Peter, I always appreciate your posts! Sorry to disappoint you about the Kneebone Boy though...our results are up here: http://blog.schoollibraryjournal.com/heavymedal/2010/12/13/mock-newbery-results/

Happily, it's impossible to predict the actual Newbery in a Mock discussion. That's never been the goal of ours. I did feel yesterday as I looked at our slate of Mock winners/honors that it was feeling very much like a DROWNED MAIDENS HAIR assortment.

(Can we get you out to Oakland next year to participate?)

Wow, you think The Porcupine Year STINKS? The group in Oakland that year praised it highly to a person; it easily won the mock Newbery. We struggled to come up with critiques. I was disappointed and somewhat surprised when it didn't medal at all in the real thing. I understand your objections to Kneebone, even if I don't agree with them (don't you usually put spoiler warnings before you give away major plot points like that?), but I can't imagine what your objections were to The Porcupine Year.

I should have been more clear about PORCUPINE YEAR. I wouldn't say the book itself stunk...I just found it as slow as molasses. I tried to read it a dozen times and simply couldn't get through the first few chapters. What I really meant to say was that as a Newbery (or Mock Newbery) selection, it stunk.

Yeah, I probably should have included a spoiler note in my blog this week...but I guess I assumed that everyone had read the lengthy pieces about KNEEBONE at Heavy Medal and already knew the twists.
But I guess I shouldn't make those kinds of assumptions.

I'd love to have the Hugh Laurie library poster!